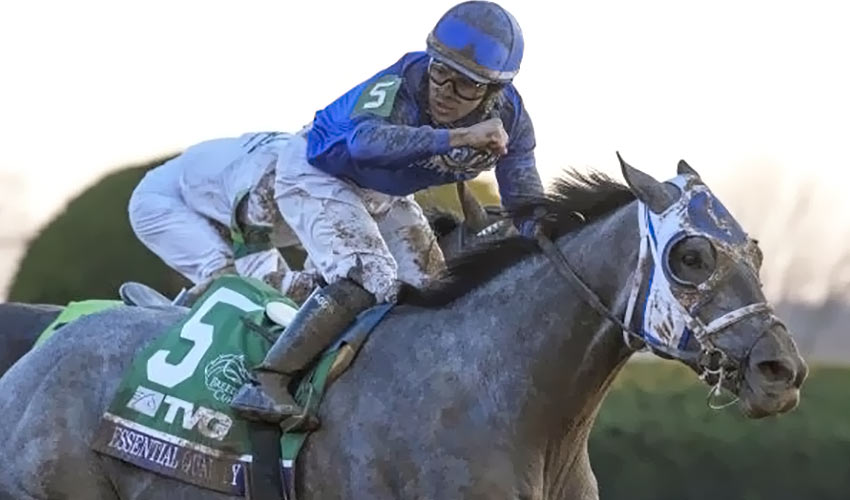 Southwest Stakes Preview: After being postponed by two weeks, the Grade 3, $750,000 Southwest Stakes is finally set to run on Saturday at Oaklawn Park. Covering 1 1/16-miles, the field of six will compete for Kentucky Derby qualifying points on a 10-4-2-1 scale.

The Southwest field is being led by champion 2-year-old male Essential Quality. Owned by Godolphin and trained by Brad Cox, he is going into the race with a perfect three-for-three record and purse earnings of $1,335,144.

In 2020, the Tapit colt earned the Eclipse Award as an outstanding 2-year-old male, and he currently sits in second in this year’s Road to the Kentucky Derby leaderboard.

Essential Quality has been training steadily at Fair Grounds since late December. Last Saturday, he completed a five-furlong drill in 1:00.4.

He will be joined by Luis Saez as a jockey, who was also aboard the runner in the Breeders’ Futurity and Breeders’ Cup Juvenile.

Two of Essential Quality’s top challengers will likely be Jackie’s Warrior and Spielberg, sitting in the ninth and eighth spots, respectively, on the Derby leaderboard.

Kirk and Judy Robinson’s Jackie’s Warrior will be running for the first time since his fourth-place finish in the Breeders’ Cup Juvenile on Nov. 6. Trained by Hall of Famer Steve Asmussen, the son of Maclean’s Music picked up a few Grade 1 victories last year.

On Oct. 10, the runner scored the Champagne Stakes at Belmont Park, which followed a victory in the Sept. 7 Runhappy Hopeful Stakes at Saratoga. His other major performance of last year was a win in the Aug. 7 Saratoga Special Stakes Presented by Miller Lite (G2) at Saratoga, and his debut was a maiden special weight victory on June 19 at Churchill Downs.

He will be joined by regular rider Joel Rosario in the Southwest.

Another top runner among the field is Speilberg, trained by another Hall of Famer in Bob Baffert. He is coming into the race with a career record of 2-2-1 from seven races and earnings of $263,200.

The runner is traveling east following his fourth-place finish in the Robert B. Lewis Stakes (G3) at Santa Anita Park on Jan. 30.

Prior to Robert B. Lewis, the son of Union Rags, scored the Los Alamitos Futurity (G2) in December, which was his last race of the year. Some of his other big performances of his two-year-old campaign include fourth in the Nov. 15 Bob Hope Stakes (G3) at Del Mar, third in the Sept. 26 American Pharoah Stakes (G1) at Santa Anita, and second in the Sept. 7 Runhappy Del Mar Futurity (G1) at Del Mar.

Spielberg will break from the outside stall under jockey Martin Garcia for the first time.