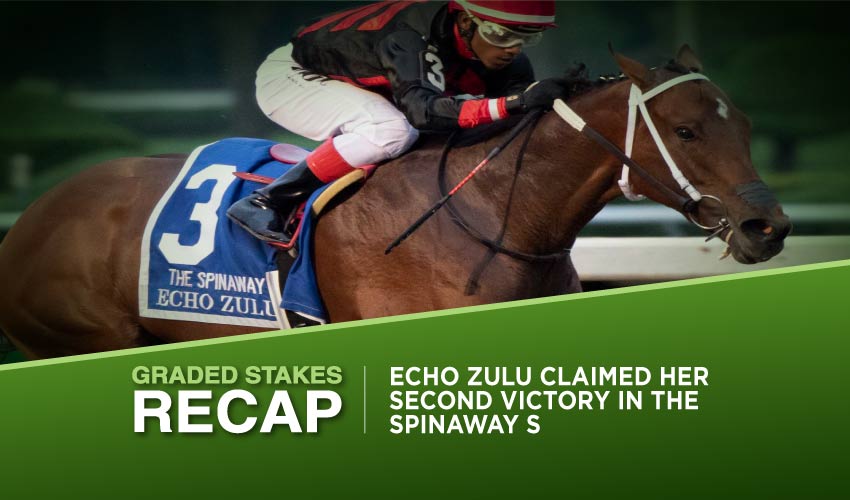 The G1 Spinaway Stakes was the pinnacle of Sunday’s card at Saratoga. At 7 furlongs, favorite Zulu Echo with Ricardo Santana Jr. aboard achieved a smooth success with the four lengths advantage over second Tarabi.

On Saturday, two other important races were held at the same venue as G3 Saranac Stakes on turf also didn’t see a surprise when Public Sector ran down promising Never Surprised finely, while in the G3 Prioress Stakes, Cilla got the better of preferred Souper Sensational.

The G2 race meant for three-year-old fillies resulted in an upset as the trio of preferred participants couldn’t match the gutsy performance of Cilla (12-1).

Over the distance of 6 furlongs, last time our impressive winner Oxana (5-2) took the lead from the start, charging boldly for the purse of $250,000 together with Edie Meeny Miny Mo (3-1), but both of them quickly ran out of steam. They left progressive Cilla at the front, where she was joined by Souper Sensational (9-10), who finished second in the G1 company last time, and the favorite trained by Mark Casse seemed to have everything under control. She confidently attacked leading Cilla; however, she couldn’t quite draw clear from her as Cilla fought hard, kept finding more and more, and all heart, she just won the Prioress Stakes in 1:10.05.

The California Chrome bay filly grabbed third place in last year’s G1 Frizette Stakes, but then Cilla retreated to the lesser competition of Allowance races and the black-type scene with only one exception. Yet, as her last two black-type attempts were victorious, Cilla stepped up the game, and under Tyler Gaffalione, achieved the most prestigious win of her career. Half a length back, Souper Sensational crossed the wire, confirming she’s a talented filly, and significant success for her is just a matter of time. Li’l Tootsie (29-2) took third place, while the early leaders Oxana and Edie Meeny Miny Mo tired themselves to fourth and fifth place, respectively.

As the G3 race over a mile and half a furlong were held at the inner track, Risk Taking was scratched; thus, it was a field of six three-year-olds competing for the purse of $200,000. Chad Brown being the successful turf specialist trainer, had still two interesting colts in the race, both waiting for the finish as Never Surprised (17-10) took the lead from the start.

The preferred bay, Public Sector (6-5), was sitting in fourth, and when Irad Ortiz jr. urged him to close on to Never Surprised in the second turn, he reacted immediately. Although he turned wide to the final stretch, he gradually got head to head with the leader, and then left him behind. Thanks to his long, fluent finish, Public Sector bagged the Saranac Stakes by a length, adding the second Grade victory to his record as last time out. He succeeded in the G2 National Museum of Racing Hall of Fame Stakes, also at Saratoga.

The progressive son of hot European sire Kingman looks like a turf US star in the making, winning Saturday’s race in 1:41.78. Todd Pletcher bound Never Surprised seems promising as well, having just four outings under his belt with two victories (maiden, black-type) and two-second places in the G3 races. The Kentucky Derby participant Like The King (8-1) finished third, closely followed by fourth He’spuregold (26-1). A bit disappointing Founder (4-1), who struggled in the last place throughout the whole race and wasn’t able to improve his position in the final stage by much.

It’s a second start for talented Echo Zulu (13-20) and also a second victory as the Steven Asmussen bound filly successfully stepped up the game. After a maiden win, she managed to triumph at the G1 scene in Spinaway S.

In the field of nine two-year-old fillies, the Gun Runner bay was the leading candidate to bag the 7-furlong race with the purse of $300,000, and on the dirt surface. She broke well out of the gate, charging for the front right away. Setting a swift pace, Echo Zulu maintained it to the final stretched where she drew clear from the rivals, and because none of the other fillies showed such a turn-of-foot that could threaten her position. The favorite romped forward and easily won in 1:22.51. Ridden by Ricardo Santana jr., the daughter of aG2 winning mare Letgomyecho, was the first at the pole by 4 lengths, earning some respect for the Breeders’ Cup Juvenile Fillies at Del Mar. Neither of her most serious potential rivals shined on Sunday, though.

While Girl With A Dream (10-1) and Pretty Birdie (4-1) tried to track the leader and subsequently tired themselves out, finishing in the last two positions. Dream Lith (8-1) was quite disappointing in the fifth as well.

Still, Tarabi (19-1), trained by Cherie DeVaux, ran a great race as she settled inside in third place. While the mentioned rivals were utterly out of the gas, Tarabi did her best to get closer to the leader. She couldn’t match Echo Zulu, but she stayed on well, and her second place was definitely an admirable effort.

Both Saucy Lady T (29-1) and Sequist (30-1) were a bit underestimated in the race. They sort of seemed to lack the class to play a role here, but they showed some speed in the final stages to finish fourth and fifth respectively.

Follow us on Social Media for instant Spinaway S updates!