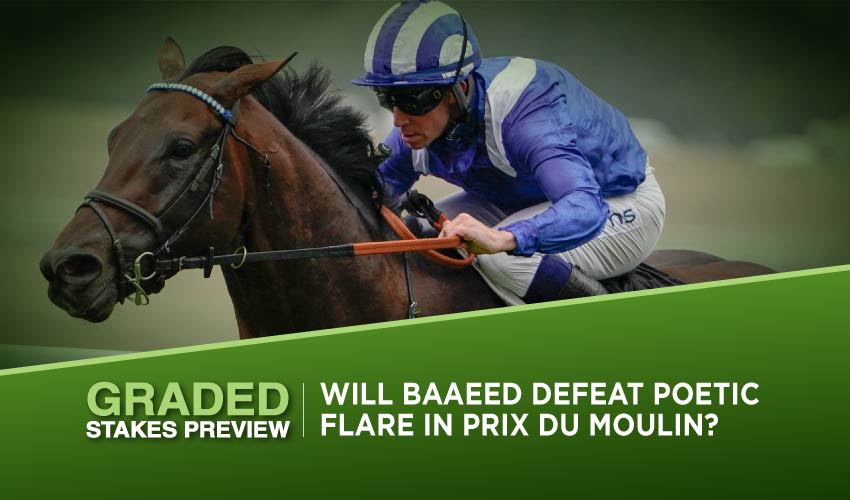 A couple of highly prestigious races is held in Europe over the weekend, namely the Sprint Cup at Haydock and Prix du Moulin at Longchamp. On Saturday, a superstar sprinter in the making, Starman, is expected to add a second G1 win the Sprint Cup as the competition isn’t really stellar. On Sunday, talented Baaeed goes for his first G1 experience. Unbeaten in four starts, the three-year-old colt headlines the field of Prix du Moulin over a mile together with smart filly Snow Lantern.

One of the last sprinting events of the British Flat season isn’t attractive because of any possible tight clashes among superstars as the race over 6 furlongs has a big favourite in Starman (2-1). The G1 race on turf open to three-year-old and older horses should be another exhibition of his talented bay trained by Ed Walker as last year, he failed to impress among the elite, but he has already proved to be a finished article by now. The four-year-old son of Dutch Art managed to win G2 at York before going on to Newmarket, where Starman showed an eye-catching sparkle in the July Cup, finishing from the rear of the field.

Despite being short of room for some time, he got to the front and left no one in doubt who is the leading candidate for the Champion Sprinter title. Last time out, Starman got beaten by a French horse at Deauville, but upon his return to Britain, he should once again benefit from a firmer ground and fulfil his role.

His competition in the Sprint Cup isn’t entirely bad, but to be honest, the big guns are simply missing at Haydock as the three-year-olds like Dragon Symbol, Suesa, or Winter Power would create a mouth-watering clash here. On the one hand, the classy mare Glass Slippers also bypasses this race and Dream of Dreams is still on the side-lines, on the other one, we can always hope some of Starman’s rivals will travel well and potentially threaten his unwavering position as a favourite. In the last year’s renewal of the race, Glen Shiel (10-2) was the one that almost caused an upset, yet Dream of Dreams managed to hold him off. The seven-year-old chestnut trained by Archie Watson likes Haydock; moreover, his form seems to peak in the autumn. However, the gelding prefers softer going.

The track will probably be good to firm on Sunday, which Glen Shiel won’t be thrilled about. Art Power (9-1), a Tim Easterby bound four-year-old, is a fine colt, but in terms of class, he probably lacks some in comparison to Starman. He should grab some money here, nevertheless. The last older contestant to mention is Emaraaty Ana (21-1), who surprised in the Nunthorpe Stakes by a promising run, taking second place there behind Winter Power. Without a shadow of a doubt, it was the five-year-old gelding’s career-best performance.

Speaking of the three-year-old participants, last year’s G1 winner Supremacy (13-1) is still waiting for one solid effort this year while firm ground might help him, but Creative Force (11-2) seems more likeable here. The Charlie Appleby bound chestnut has won Listed and G3 this year, upon which he finished fifth in the July Cup. The question is whether he thrives more on 7 or 6 furlongs, but we have to wait for the answer at least until Saturday’s race.

Starman is the obvious choice here, with Creative Force being the best of the rest.

No Poetic Flare, Alcohol Free, or Palace Pier, still the G1 gem of the Sunday’s card at Longchamp hasn’t lost all the charm. With the purse of €270,000, the turf race open to three-year-old and older horses finds its main star in Snow Lantern (15-2) trained by Richard Hannon. The grey three-year-old filly is a daughter of two other spectacular specimens, sire Frankel and mare Sky Lantern who won four G1 races herself. On Sunday, Snow Lantern will attempt her second success among the elite after she bagged the Falmouth Stakes in July.

Since then, she tried her best in Sussex Stakes at Goodwood; however, she strongly disliked the soft ground, finishing third behind Alcohol Free and Poetic Flare. But truth be told, the surface is usually soft in France so that Snow Lantern will be vulnerable once again.

There are no rivals who would appreciate anything below good to soft, though, with one exception – the German 1000 Guineas winner Novemba (36-1). The Peter Schiergen bound bay seems to be a decent filly as she finished fourth in Coronation Stakes, but she’ll probably fall short in this company.

Despite the undeniable class of Snow Lantern, the race attracted a three-year-old colt that might be even better than her –the unbeaten bay trained by William Haggas named Baaeed (5-2). The son of Sea Of Stars didn’t hit the track until this June, and when he easily won a maiden and novice, he was pointed towards a Listed over a mile, where the talented colt left the quality field behind by 4 lengths. Last time out, Baaeed had no issue when winning G3 at Goodwood. Indeed, he’ll meet rivals of a different league; still, he has been so impressive so far, he is seen as the favourite or the biggest threat to Snow Lantern, at least.

The final trio of contestants consists of Aidan O’Brien’s Irish duo and a single French-bound horse in the field. Four-year-old Order of Australia (11-1) looks the better one of O’Brien’s pair even though he hasn’t shown the same form as in the Breeders’ Cup Mile in November, where he caused a huge upset

He won a G2 race over 7 furlongs this year and placed third behind Palace Pier and Poetic Flare last time out, and he should reach a similar place again at Longchamp. His stable-mate Lope Y Fernandez (21-1) was second at Royal Ascot behind Palace Pier, yet nothing of a similar sort came from him in two subsequent starts. He’s the one who is not going to benefit from the soft ground at all. The last to mention is four-year-old Victor Ludorum (16-1) trained by Andre Fabre, who hasn’t properly shined since his Classic win in last year’s June.

Snow Lantern and Baaeed are the hottest success candidates, and the outcome more or less depends on how either of them handles the surface. Novemba might exploit the soft conditions and hold onto some money in the final stage.