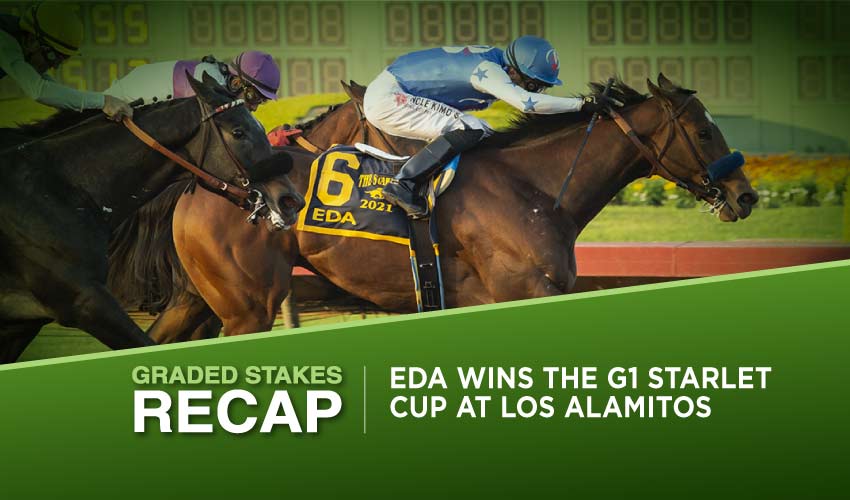 Saturday’s main race at the Los Alamitos racecourse was open only to two-year-old fillies, among which Grace Adler was expected to make up for her previous below-par run and to add the second G1 success to her record. However, Bob Baffert didn’t rely just on her as, in the end, progressive Eda was the one who delivered a victory at Starlet Cup in front of smart Grey Cairo Memories.

The Starlet Cup a G1 race for two-year-old fillies attracted a field of six participants who covered the distance of a mile and a half of the furlong on the dirt surface. Bob Baffert won the $300,000 affair four times in a row and was attacking another victory, equalling the record of Wayne Lukas, while his chances were significant as he pointed three fillies to the race, including a G1 winner Grace Adler (21-10).

However, quite experienced Eda (11-10) looked slightly more interesting, given she scored her last two outings and simply seemed to bring finer form to Los Alamitos, which proved correct. Piloted by Juan Hernandez, Eda was quick on her feet from the outside stall and charged for the lead, yet her stable-mate Benedict Canyon (42-1) took command shortly after. Therefore, Eda spent the first half of the race in second, but prior to the second turn, she was already surging for the first place and showing she’s earnest about winning her premiere G1 race here.

Still, her victory wasn’t meant to be impressive as Eda was soon joined by Tonito’S (197-10), who thronged between the rivals and even headed Eda for a while, but the favourite was adamant about bagging the Starlet Stakes.

The Munnings bay filly just dug deep, regained the lead, and delivered Bob Baffert another success in the race in 1m 44.51s. Eda thus bettered Tonito’S once again; however, the Doug O’Neill bound filly didn’t hold on to the second place as late finishing Cairo Memories (37-10) made amends for her fruitless run in the Breeders’ Cup Juvenile Fillies Turf, transforming her first start on the dirt surface into an excellent performance. She ran in second by a half of a length; Tonito’S was third.

At the second start of her career, Grace Adler scored the G1 Debutante Stakes by almost 12 lengths; however, neither of her subsequent efforts resembled the commanding performance from September.

Her jockey, Flavier Prat, allegedly told Bob Baffert that the filly just wasn’t interested in running at all, which should be perceived as quite a shame, given she displayed a tremendous amount of talent in the mentioned G1 event.

Sign up and get a 10% rebate. Make sure to stay tuned for the latest Horse Racing odds, racing entries and Races results.