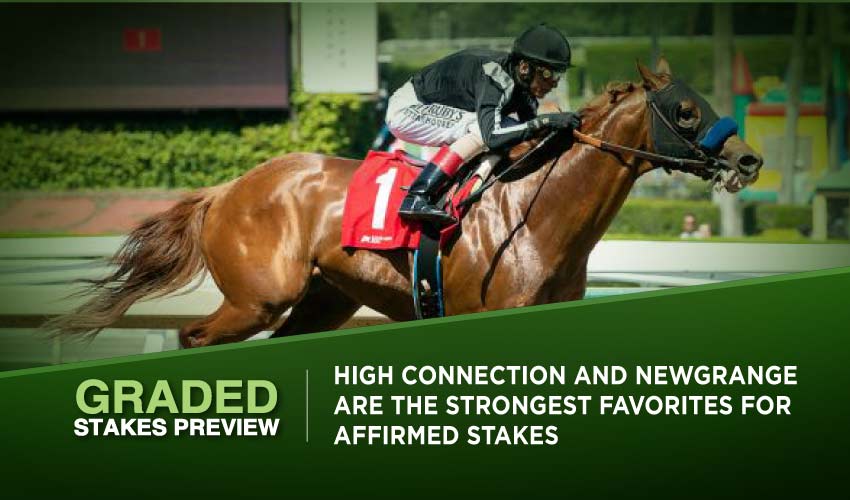 The upcoming weekend offers two Graded races at the Santa Anita Park. On Saturday, some exciting three-year-old clash in the G3 Affirmed Stakes as unexperienced High Connection will face here a duo of colts, once considered even for the Kentucky Derby – Doppelganger and Newgrange.

On Sunday, the focus shifts to three-year-old fillies who are about to line up in the G2 Summertime Oaks. The field of seven fillies features some talented, less skilled participants, but the star of the race is crystal clear – it’s Desert Dawn, finishing third in the Kentucky Oaks.

The G3 dirt race is open to three-year-old who are about to compete for the purse of $100,000. Six participants will line up here at a mile and a half of a furlong, including a couple of ex-Bob Baffert trainees.

Newgrange, currently with Tim Yakteen, completed a victorious hattrick in January after bagging his debut and two G3 races, the Sham and Southwest Stakes. Subsequently, he was faced with a slightly tougher task in the G2 Rebel Stakes, where Newgrange utterly failed to make an impact. He finished sixth and hasn’t hit the track since February.

Some time to rest and maybe grow a bit couldn’t harm him, and because he should handle the trip without a problem, he needs to be considered here on his return. His stable-mate Doppelganger has five outings under his belt. After a successful debut, he ran in fourth in the G2 San Vicente Stakes, took second in the G2 San Felipe Stakes, and then recorded fourth place in the G1 Arkansas Derby. Such results definitely weren’t enough for Doppelganger to slip into the elite of three-year-old, which he affirmed with a sixth position in the G2 Pat Day Mile.

Still, this is a G3 race, and like Newgrange, Doppelganger could actually make amends here for his lacklustre performances throughout 2022. He should be capable of that by no means.

Like Tim Yakteen, Sean McCarthy also relies on two runners, especially High Connection. The chestnut has hit the track twice in 2022, as after winning his debut by ten lengths, he had to settle for second place in an Allowance race.

Indeed, High Connection didn’t fulfil the role of a favorite back then, but it was only his second start. On Saturday, he should boast his talent and fight for the win at least. His stable-mate Hopper has also just two outings under his belt as he broke his maiden on the second attempt, leaving behind Pioneering Papa, who won a maiden next time out. To complete the listing of participants, we mention Fast Draw Munnings, a black-type scorer whom High Connection left behind when he met him in the Allowance race.

Our pick for the Affirmed Stakes is High Connection because he seems classy, and if he’s quick on his feet once again, he could run away even from Newgrange, carrying more weight here.

On Sunday, three-year-old fillies will clash in this G2 race, offering the purse of $200,000. On the dirt surface, seven participants are about to cover the distance of a mile and a half of a furlong, while the leading chance seems to be Desert Dawn trained by Philip d’Amato.

The daughter of Cupid has shown some talent as a junior, given she placed third in the G2 Chandelier Stakes and ran in fourth in the G1 Starlet Stakes. In 2021, she commenced the new season with fourth place among the G3 company, which wasn’t that promising; however, Desert Dawn made amends for the performance by winning the G2 Santa Anita Oaks next time out. She bettered even hot favorite Adare Manor back then, so as she was subsequently aimed at the Kentucky Oaks, she belonged among the considered contestants.

In the end, Desert Dawn delivered a very solid run when finishing third behind Secret Oath and Nest, beating Echo Zulu, for example. She’s about to face some exciting fillies here, but if she runs in a similar fashion she did in Churchill Downs, she should be the one to beat here.

Under The Stars clashed with Desert Dawn in the G2 Santa Anita Oaks, where he had to settle for fourth place. Prior to that run, the Sean McCarthy bound bay scored the G2 Santa Ynez Stakes over seven furlongs and ran in second in the G3 Santa Ysabel Stakes as she couldn’t better Eda this time. The filly seems to be a decent one, but upon trying a distance longer than seven furlongs, she recorded two losses, and therefore, she probably won’t appreciate Sunday’s trip as well.

Bicameral has just once Graded experience under her belt when finishing third in the G1 Del Mar Debutante Stakes in September. Besides this, Bicameral wasn’t able to break her maiden at four attempts as finally, in April, she destroyed the competition over a mile distance by more than ten lengths.

She delivered a fine run back then; still, the George Papaprodromou bound filly needs to step up her game some more to threaten Desert Dawn on Sunday.

The remaining quartet is hard to decipher as their chances seem more or less equal. Lady T broke her maiden last time out by more than 14 lengths in May, while in February, she wasn’t able to better Ganadora, who then went on to win an Allowance race. Kirstenbosch and Empire Gal met up in a Listed race over seven furlongs, with the former seizing second place in front of the latter.

Our pick for the Summertime Oaks is Desert Dawn, who ran a blinder in the Kentucky Oaks, and if she shows something similar on Sunday, she should record her second G2 triumph. Lady T could be the best of the rest as unlike some other fillies in the field, she’s already proven to handle the trip with ease.

Follow us on Social Media for 2022 Affirmed Stakes updates!