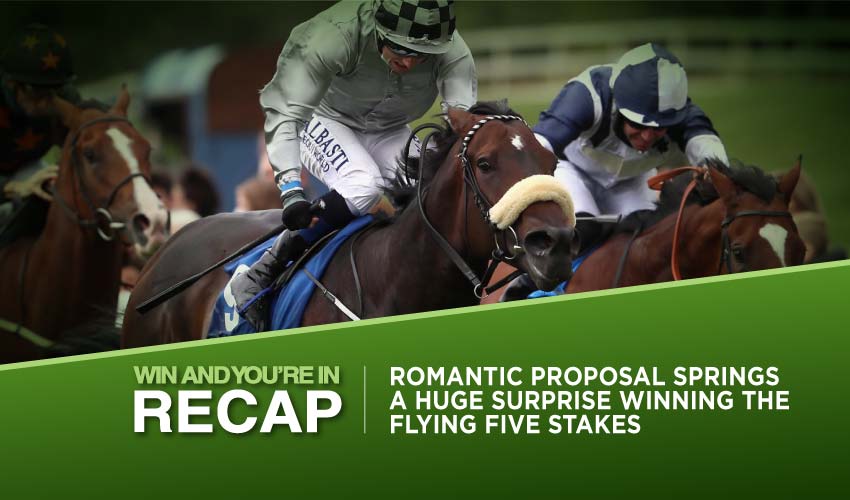 Sunday’s racing card at Curragh Recap, Ireland, wasn’t entirely encouraging for the favourites. From the four G1 races throughout the afternoon, only two saw winners that weren’t that surprising as Sonnyboyliston took the pinnacle of the meeting, the Irish St Leger, and Native Trail was the second chance for prevailing in the Vincent O’Brien Stakes among youngsters. Still, Discoveries wasn’t expected to score the Moyglare Stud Stakes among two-year-old fillies, while Romantic Proposal hasn’t shown any signs she should be that good in the Flying Five Stakes. After all, the afternoon at Curragh provided some high-quality action, bringing some new talents of respective divisions to the spotlight.

With the purse of €300,000, this G1 turf race over the distance of just 5 furlongs was meant to be a clash between a talented duo of three-year-olds Dragon Symbol (5-2) and Winter Power (16-5) with five-year-old mare Glass Slippers (7-2), yet none of the mentioned was capable of striking gold on that day. The Nunthorpe Stakes-winning filly Winter Power was the only really disappointing one, though, because she was too eager under Silvestre de Sousa, and surging for the lead from the start, she soon enough tired herself out. During the last furlong, she dropped from the first position to the tenth, beating only two rivals, including also disappointing Mooneista (11-1).

The other two favourites, Dragon Symbol and Glass Slippers, travelled smoothly throughout the race, and both displayed a turn of foot. Still, another participant was able to provide a more powerful move – Romance Proposal (16-1). The five-year-old mare trained by Edward Lynam has always been a smart filly, winning some handicaps for her connections, though she matured only in the season 2021. Bagging her first Listed victory, Romance Proposal placed in the G3 and G2 company, still, she was beaten even by Mooneista or other rivals she was about to meet in the Flying Five Stakes. However, Chris Hayes gave her a lovely ride, allowing her to relax in the first part of the race, and as soon as the favourites kicked off, he pointed Romance Proposal in between Dragon Symbol and Glass Slippers. After navigating through other contestants, the mare just made space for herself once again, challenged the duo, and finally went past them. Three-year-old A Case of You (33-1) was another underrated sprinter in the field, managing to come up with a nice finish from the outside, but he couldn’t match Romantic Proposal. The Raven’s Pass mare won by half a length in 59.77s, bagging her first Grade success.

A Case Of You showed some talent when powering for the second place, leaving Glass Slippers and Dragon Symbol behind in third and fourth place, respectively. On the one hand, the pace Winter Power set was far too quick, so it’s no wonder she was tired in the end, which applied to other horses pressing the tempo. On the other one, it helped Rohaan (18-1), who was late to get out of the gate, to make a move when the pace slowed down in the end, taking fifth place in front of Gustavus Weston (8-1).

After Jessica Harrington celebrated a victory of No Speak Alexander at Leopardstown, the Irish trained was given another reason for some joy. Her brilliantly-bred filly Discoveries (17-2) surprised all the preferred fillies in the G1 Moyglare Stud Stakes and achieved a deserved win in this turf race over 7 furlongs. Eight two-year-olds competed for the purse of €300,000, but two of the leading candidates just didn’t fire at all as Homeless Songs (9-4) was only fifth, leaving Cairde Go Deo (85-40) in sixth.

The race was more or less just about two participants, leading the pack from the beginning. The G2 scorer Agartha (100-30), trained by Joseph O’Brien, was the first to get to the front, and she travelled lovely in front of Discoveries ridden by Sean Foley. The couple occupied the first place until the final stage, where Agartha was digging deep and fighting for the win, but Discoveries has progressed significantly since her last outing. With enthusiasm, she took the command and cruised for the victory with the advantage of ¾ of length on Agartha. She crossed the wire in 1m 27.10s.

As we mentioned the successful bay to be brilliantly bred, it is true as not only she’s a half-sister to the Coronation Stakes winner Alpine Star, she’s also a full-sister to phenomenal Alpha Centauri, who scored four G1 victories in a row in 2018. Discoveries seemed to follow in her sisters’ footsteps by being a decent two-year-old as she after won a maiden, she went on to grab third place in the G2 behind Agartha and Sunset Shirazz (12-1). However, she quickly shaped into a much more mature filly, leaving the mentioned couple behind this time. Speaking of Sunset Shirazz, she didn’t manage to beat Agartha even at the second attempt, but she displayed a fine turn of foot once more. Together with the fourth Concert Hall (33-1), their time might come in the future, which should also apply to Homeless Songs. She just didn’t shine on Sunday, there was no spark about her, and overall, she didn’t resemble the filly who easily won on her debut. Hopefully, Homeless Songs will recover from the run and come back in a better form.

Point Lonsdale (8-13) was another favourite who failed to deliver when considered the top pick for the G1 turf race over 7 furlongs. With the purse of €300,000 up for grabs, seven two-year-olds lined up here with Ebro River (13-2) taking command from the start. The only G1 winner in the field, as triumphed in the Phoenix Stakes, wasn’t expected to relish the additional furlong, though. Still, he thrived at Curragh, travelling enthusiastically at the front, closely followed by Point Lonsdale. The Aidan O’Brien bound colt has won all from his four outings, including the G2 Futurity Stakes, so it was a bit underwhelming seeing him struggle to leave Ebro River behind in the final stage. Of course, the white-faced bay tried when Ryan Moore urged him to quicken up, but nothing extraordinary happened.

Therefore, it was no wonder that Native Trail (7-2) went by him smoothly, effortlessly, and with lots of energy remaining in the tank. The still green colt trained by Charlie Appleby won a G2 race last time out, and it was just his third showing when striving to keep his clear record, but his performance was simply stunning. William Buick didn’t rush anywhere initially, letting Native Trail gallop without pressing him, and once he asked the colt some questions, Native Trail answered with an eye-catching finish. Although he’s a pretty large and immature youngster, it meant no problem for him as the bay surged for the lead and won easily by three and ½ lengths in 1m 26.27s.

Native Trail has looked like a real deal since his debut, but this performance surely positions him as one of the leading two-year-olds in the United Kingdom and Ireland. Point Lonsdale has probably lost some of the hype surrounding him, though, his effort wasn’t that bad, and he might’ve needed a swifter pace here; moreover, it was sort of iconic he placed second here while his full-brother Broome took the same place on the same day in the G2 Prix Foy in France. And the Aidan O’Brien colt may return with a bang in his next outing as there definitely is some class about him.

To his credit, Point Lonsdale didn’t enjoy the race but fought hard to get past Ebro River, which he did the last stride, leaving the brave chestnut behind in third. Apart from the top three, the rest of the field was no match as Ultramarine (100-1) was fourth and Great Max (28-1) fifth.

Search For A Song (100-30) was the last favourite that was disappointing throughout the G1-packed afternoon at Curragh, failing to make an impression in this turf race over a mile and 6 furlongs. Brimming with energy in her past performances, the five-year-old mare trained by Dermot Weld sort of confirmed not to be in the same form as in the last season, and after two preparations run, she showed no turn of foot in the final stretch. Under the ride of Oisin Orr, the Dermot Weld trained mare mirrored the underwhelming performance of Homeless Songs among youngsters and finished sixth in her attempt to win the Irish St Leger for the third consecutive year.

But the day at Curragh belonged to somebody else – jockey Ben Coen, trainer Johnny Murtagh, and four-year-old Sonnyboyliston (4-1). Last year, the chestnut gave some promising performances, bagging a prestigious handicap here; moreover, he wasn’t that far away from really classy horses at the beginning of this season, including Broome and Japan. Upon winning a Listed over a mile and a half, former successful jockey Johnny Murtagh pointed Sonnyboyliston to the Ebor Handicap, offering an even bigger purse than the Irish St Leger with its £300,000 the winner.

And the progressive chestnut won both after he put on a successful fight, becoming a part of the history at York and at Curragh, too, where Ben Coen led him to a win in 3m 2.05s. The white-faced gelding settled in a fourth place, but he was far away from the leader whose pace nobody accepted with Twilight Payment (9-2) leading the pack in the second place. As the field reached the final stretch, Sonnyboyliston was already at Twilight Payment heels, and fighting for the first place, the eight-year-old just couldn’t hold a candle to the much younger rival who, in the end, beat him by a ¾ of a length. For the whole team, it was the first Classic success in their careers.

The winner of the Irish St Leger trial Twilight Payment ran another great race and was all heart in the final stage, giving a signal he’s still in fine form, however, it doesn’t change anything about his trip to the Melbourne. As his owner Lloya Williams express himself in August, neither Twilight Payment nor Master of Reality will go to Flemington due to the new requirements the Australian racing authority put in place and which his Irish aren’t capable to meet. Behind the excellent servant for the connection, another Joseph O’Brien’s lot crossed the wire – Baron Samedi (6-1).

The talented four-year-old spent the race in the midfield but improved his position in the final turn, finishing from the outside to grab third place. Still, he was a bit twisting under his jockey, and he could be even better if he just charged straight to the finish line. As Aidan O’Brien’s Amhran Na Bhfiann (18-1) occupied the front with a significant advantage on his rivals, he might’ve been the one to settle a convenient pace for his stable-mates. Yet when he weakened, only one of his colleagues welcomed the tempo enough to seize some money – King Of The Castle (12-1).

The three-year-old full-brother to the Epsom Derby winner Serpentine settled behind Twilight Payment but could not improve much in the final stage. Still, fourth place was a fine effort from one of two three-year-olds in the race. The last participant who passed Search For The Song was Emperor of the Sun (10-1), another young promising stayer who secured fifth place for his trainer Donnacha O’Brien.

Follow us on Social Media for instant Curragh Recap updates!