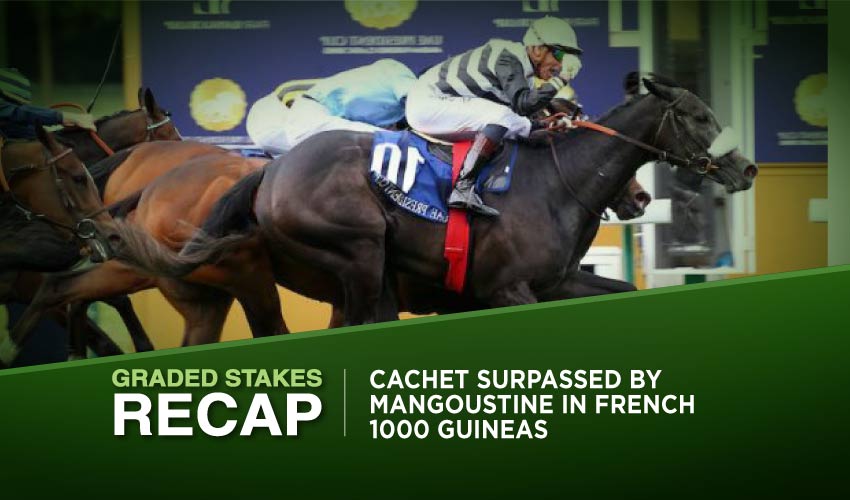 On Sunday, two French Classic races took place at the Paris Longchamp Racecourse. It’s becoming sort of a tradition that the Poule d’Essai des Pouliches is bagged by a local, more or less underestimated filly who surprises the favorites coming from the United Kingdom and Ireland, which also happened in 2022. Mangoustine, ushered by veteran Gerald Mossé, scored the race this time in front of Cachet, vying for the Classic double but being edged by a head.

The equivalent of British 1000 Guineas was open to three-year-old fillies who competed at the distance of a mile.

The purse of €500,000 attracted fifteen participants, clashing on the turf surface, and like in the past years, the event saw an upset as the favorites got bettered by underestimated Mangoustine (12/1).

The bay trained by Mikel Delzangles had a good start and pursued the leaders from the sixth position to strike powerfully in the final stretch. Veteran jockey, Gerald Mossé, urged her forward and the daughter of Dark Angel did so willingly, fighting bravely for the win with British Cachet (2.5/1), who she managed to beat by a head. Crossing the wire in 1m 35.72s, Mangoustine ensured the Classic glory stayed in France. Cachet finished second, just a short head in front of third Time Square (16/1).

Although Mangoustine didn’t belong among favorites, she was one of the fillies whose improvement isn’t that surprising. After all, she signed off her juvenile campaign with a G3 victory, remaining unbeaten in three starts, and her seasonal debut was quite good as she finished third in the trial behind Rosacea (3/1) and Toy (5/1).

On Sunday, she stepped up her game successfully and had a splendid gallop under 55-years-old Gerald Mossé, who scored the Poule d’Essai des Pouliches for the second time after long 24 years.

Unlike some of her rivals, Mangoustine had enough space to rally forward on the outside, and thanks to Gerald Mossé, who led her that way, the bay could deliver Classic glory and better tremendous Cachet.

The British raider traveled to France with the 1000 Guineas triumph under her belt and tried to prevail here from the front as well, and she almost succeeded but, in the end, had to settle for second place.

Time Square bumped into problems with the lack of room; she still took third place and drew on the second place from last year’s G1 Prix Marcel Boussac. She was only seventh in the trial; however, on Sunday, she left behind both abovementioned fillies as Rosacea finished fourth in the Classic race and Daisy Maisy was fifth.

In terms of other anticipated fillies, Jumbly (8-1) and Mqse de Sevigne (12/1) didn’t show anything of interest and crossed the wire in eighth and ninth places, respectively, with Aidan O’Brien’s Toy (5/1) finishing eleventh after a prominent run.

In the company of fifteen three-year-old colts (no geldings), Modern Games (2/1) didn’t allow an upset to happen.

The G1 turf race was held at a distance of a mile and offered the purse of €600,000, and chestnut Modern Games was expected to earn most of it, which he actually did in a grand style. William Buick let his mount gallop on the front after the son of Dubawi had a great start.

They remained among the leaders throughout the whole race, upon which Modern Games fought bravely for the win. Surprisingly, outsider Texas (50/1) proved to be the toughest nut the crack here, but the favorite outbattled him in the and prevailed in 1m 34.98s after he drew clear from his rival, scoring with the advantage of one and ¼ of a length. Behind second Texas, Tribalist (11/1) took third.

Modern Games, sporting the blue colors of Godolphin, caught the eye in 2021 thanks to his excellent performance in the G1 Breeders’ Cup Juvenile Turf, where he scored easily by a length and a half.

Still, his effort earned him respect also due to another factor – he almost scratched prior to the race as his stable-mate reared in the starting gate; Modern Games had to leave the gate, too, and was even announced a non-runner. Subsequently, it showed to be a communication error, and Modern Games was good to go, and despite the pre-race hectic atmosphere, the chestnut was able to concentrate enough to fulfill the role of a favorite back then.

In 2022, he seems to continue his successful career as without a preparatory start, his performance in the French Classic race was gutsy and simply brilliant, while his trainer Charlie Appleby (who also won the British 2000 Guineas with Coroebus) has already suggested he wants to point Modern Games towards the French Derby.

In terms of those who finished behind the winner, Texas was all over the place throughout the event as he boasted enthusiasm when taking command and was a tough opponent in the final stretch despite being just a Listed winner.

Under Clement Lecoeuvre, he showed an extraordinary spark, and we’re interested in what comes next from this colt who held on to second place in front of Tribalist, another representant of Godolphin. Tribalist took second in the main trial and once again weakened only in the closing stage but didn’t allow fourth Ancient Rome (9-1) to outrun him. One of the favorites, Lassaut (4.5/1), finished fifth, with his stable-mate Welwal (53-10), victor of the main trial, had to settle for sixth.

The rest of the interesting participants didn’t impact the race at all, including Aidan O’Brien’s The Acropolis (34/1), Roger Varian’s Bayside Boy (11/1), and Jane Chapple-Hyam’s Claymore (18/1) who finished as the last of all.

Follow us on Social Media for instant Mangoustine updates!