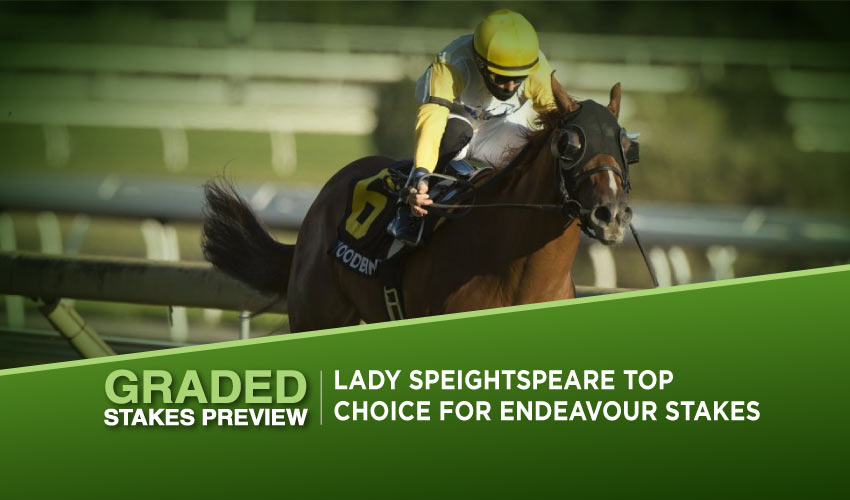 Saturday’s card at the Tampa Bay Downs offers two G3 races as exciting fillies and mares will meet in the Endeavour Stakes on the turf surface, upon which Get Smokin will attempt winning the Tampa Bay Stakes again.

The G3 turf race is open to four-year-old fillies and older mares who are about to clash at the distance of a mile and a half of a furlong. The purse of $175,000 attracted a field of ten participants, among which Lady Speightspeare (3-1) could return to winning ways after getting bettered in the Listed Tropical Park Oaks. Prior to finishing third back then, the four-year-old filly was victorious in all of her four outings, including triumphs in the G1 Natalma Stakes and G2 Bessarabian Stakes.

Still, the loss during her most recent start could be excused by the fact that Lady Speightspeare was carrying the biggest weight, which might’ve stopped her and as the weights are equal on Saturday, the Roger L. Attfield bound chestnut is the leading chance here. Last time out, she was also beaten by Stunning Princess (8-1) who finished second in the Listed race, and even though she benefited from the lower weight on her back, the four-year-old filly proved she could be a player at the Listed scene and maybe even at the G3 stage.

She’s in the mix here together with Oyster Box (4-1), the Graham Motion trainee of the same age who ran in second in the Ontario Damsel Stakes, a black-type race held in October. She hasn’t hit the track since, but she’s been always showing enough class to place in the G3 company. Seven-year-old Nantucket Red (10-1) has been a fine servant for the connection, and after winning a Listed race in January, she is expected to carry her form to Saturday’s race.

The last to mention is four-year-old In Italian (9-2) with just three outings under her belt, still, she won two of them, including the January Allowance race that she scored after a dominating effort from the front. Being a daughter of Dubawi trained by Chad Brown, she could easily be the next turf star for him.

Our betting pick for the Endeavour Stakes is Lady Speightspeare because she’s shown enough class to score this, but we’re pretty excited to see what In Italian is capable of in such a company.

The second of a couple of G3 turf races held on Saturday at the Tampa Bay Downs welcomes a field of 13 four-year-old and older horses who will compete for the purse of $175,000 while covering the distance of a mile and a half of a furlong. The competitive field features some horses that have proven to perform well at such a stage and trip. However, Get Smokin (4-1) should be the first to mention here as he scored the race in 2021, upon which he managed only to win a Listed.

Still, his other performances weren’t bad as he was disadvantaged in terms of weight back then, while on Saturday, he’ll carry the same weight as, for example, four-year-old Cellist (12-1) who could play a big role here, or the eight-year-old veteran Devamani (3-1), scoring a G3 race in June. L’Imperator (9-2) and Clear Vision (12-1) are also in the mix.

Our top pick for the Tampa Bay Stakes is Cellist, a young, interesting colt who finished third in the Belmont Derby behind Bolshoi Ballet and Tokyo Gold.

Follow us on Social Media for Endeavour Stakes updates!