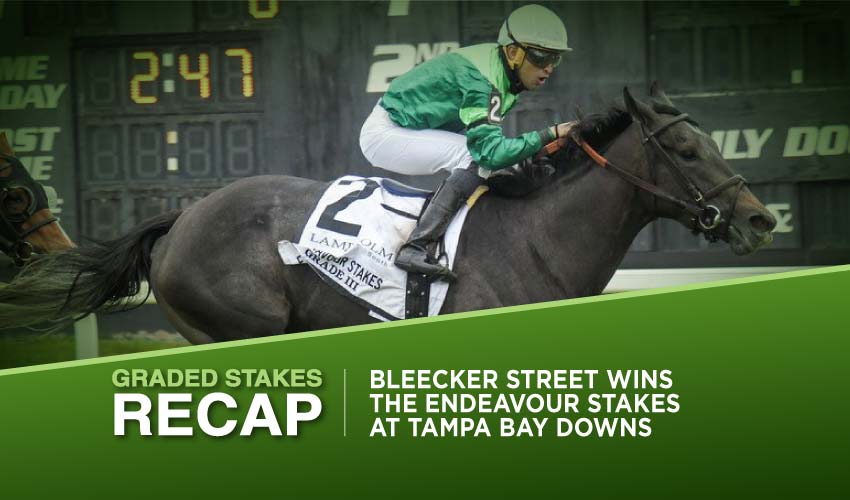 Saturday’s card at the Tampa Bay Downs offered two G3 turf races. Although trainer Roger Attfield and jockey Emma-Jayne Wilson had a great chance to strike gold in the Endeavour Stakes among fillies, they had to settle for second place with Lady Speightspeare as Bleecker Street was simply better on that day. Still, they bagged a G3 win on Saturday, the Tampa Bay Stakes, thanks to Shirl’s Speight, who ran down last year’s victor Got Smoking.

The G3 turf race was open to four-year-old fillies and older mares who competed for the purse of $175,000 at the distance of a mile and a half of a furlong. The G1 and G2 winning chestnut Lady Speightspeare (9-10) was the obvious leading chance here, and under Emma-Jayne Wilson, she galloped in second throughout the whole race.

In the final turn, she gradually closed on the leading rival to take command; however, the four-year-old filly failed to draw clear of the rest of the field, upon which she was considerably weakening, unlike Bleecker Street (7-1). The four-year-old filly trained by Chad Brown had only three starts under her belt, winning all of them, but when facing Saturday’s field, she wasn’t expected to run such a great race and strike gold in 1m 41.91s.

Piloted by Hector Diaz jr., Bleecker Street spent the race at the rear of the field, which brought about complications in the final stretch as the big bay lacked some needed space to actually rally forward. Fortunately for her and her team, a spot appeared in time, the jockey pointed his mounted there, and in a matter of a few seconds, Bleecker Street bolted forward, left her rivals behind, and easily passed by also Lady Speightspeare by one and a half of a length.

If she continues her progress, the filly could be another super turf specialist for Chad Brown, but Lady Speightspeare didn’t deliver a bad performance either, keeping the second place from third Stunning Princess (9-2) by ¾ of a length.

Another G3 of the day was open to four-year-old and older horses, which were about to cover the distance of a mile and a half a furlong on the turf surface. The purse of $175,000 attracted 12 contestants, but like in the Endeavour Stakes, the preferred runners were bettered by an underestimated rival, five-year-old Shirl’s Speight (19-2). Although Emma-Jayne Wilson and trainer Roger Attfield lost in the previous race, the smart bay made up to them as nobody could resist his powerful turn-of-foot.

Sitting in the midfield, the Shirl’s Speight was primed to draw on his sure victory in an Allowance, so after overcoming some difficulties in the final stretch and finding himself a space to rally forward, he promptly advanced on the leading horse and sentenced him to the second place.

Shirl’s Speight bagged his second G3 win (as he scored one in 2020 at his second time out) in 1m 41.20s by one and a half of a length in front of last year’s winner Got Smokin (51-10), who led throughout the race; however, he was just caught off guard by Shirl’s Speight finish. Floriform (161-10) was third, while the preferred contestant, L’Imperator (7-2), couldn’t get past 10th place.

Follow us on Social Media for Tampa Bay Stakes updates!