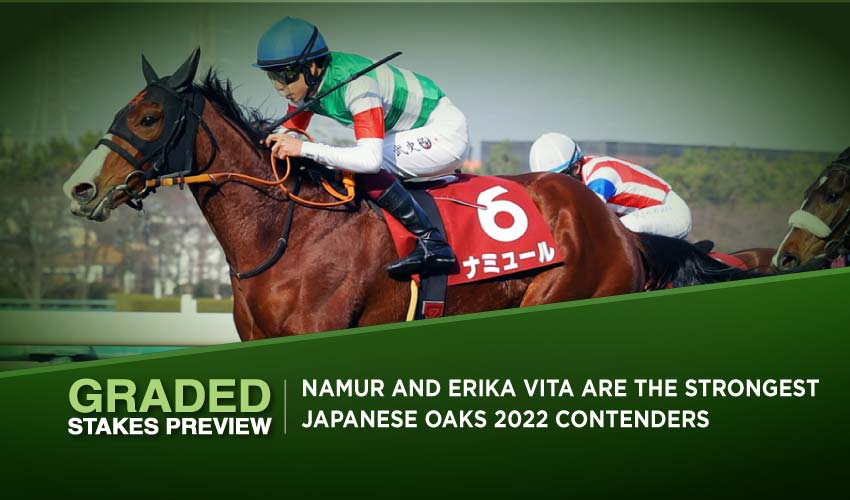 The upcoming weekend features two Graded races at the Japanese tracks. On Saturday, the winner of the G1 Champions Cup, T O Keynes, will make an appearance in the G3 Heian Stakes in Chukyo after running a disappointing race in the Saudi Cup. On Sunday, three-year-old fillies aim at the Tokyo Racecourse to clash in the Yushum Himba, in other words, the Japanese Oaks.

The prestigious event has generated outstanding fillies in past years, including Almond Eye, Loves Only You, and Daring Tact. This time around, Stars on Earth will try to draw on her success in the G1 1000 Guineas win with other exciting fillies like Circle of Life and Water Navillera attempt to turn the tables on her

The Japanese Oaks is held at the distance of a mile and a half and open, logically, only to three-year-old fillies. Eighteen of them will compete for the purse of 266,000,000 Yen on the turf surface in this prestigious G1 event where Stars on Earth attempts to score her second Classic race of the season.

The Mizuki Takayanagi trained daughter of Duramente was just a maiden victress when heading to the local 1000 Guineas. Still, after placing in two trials, Stars on Earth displayed such a turn of foot that she managed to better all of the preferred fillies in the 2022 Oka Sho. Under Christopher Lemaire, the bay is expected to run another big race on Sunday; still, she hasn’t covered such a long trip yet, usually racing at the distance of a mile.

In the 1000 Guineas (Oka Sho), she earned the Classic glory by the tiniest margin possible – by the nose in front of Water Navillera. This filly trained by Koshiro Take is another consistent participant, given she scored three of her 2021 outings, and then came home in third in the G1 Hanshin Juvenile Fillies. Although she was only fifth in the main Classic trial, Water Navillera then delivered great effort in the 1000 Guineas and almost scored there.

She is very classy, and with Yutaka Take aboard, she needs to be considered, yet it wouldn’t be a surprise if she gets beaten by a narrow margin once again. Circle of Life bettered Water Navillera in the mentioned G1 race in 2021, concluding her victorious hattrick back then. In 2022, the Sakae Kunieda bound bay ran in third in the main trial, G2 Tulip Sho, and tried her best in the Oka Sho but couldn’t get past fourth place.

Still, she performed much better than one of the favourites for the Classic win, Namur, who scored the trial but managed only tenth place in the 1000 Guineas. We mention this because she’s already given one below par effort and then returned with a bang, so we don’t underestimate her.

The last names to talk about are Erika Vita and Stunning Rose, who both scored in the Oaks trials. In April, the former bagged the G2 Flora Stakes when successfully handling the distance of a mile and a quarter, while the latter bagged the G3 Flower Cup over a mile and a furlong.

Although it’s difficult to picture these two contestants beating the abovementioned Classic participants of the Yushin Himba, it always depends on the fact which of the eighteen fillies will appreciate the mile and a half long-distance the most and also boast enough class to prevail in such a prestigious matter.

Stars On Earth to complete a Classic double.

The Yushun Himba; also known as the Japanese Oaks is a Japanese Grade 1 flat horse race for three-year-old thoroughbred fillies run over a distance of 2,400 metres (approximately 1 mile 4 furlongs) at the Tokyo Racecourse, Fuchū, Tokyo in May.

It was first run in 1938 and is the Japanese equivalent of the English Epsom Oaks.

On May 23, 2010, in the 71st running of the Yushun Himba, Apapane and Saint Emilion hit the finish at the same time in the race, making the first time that a Grade 1 race in Japan has resulted in a dead heat for the win.

On the dirt surface, sixteen four-year-old and older horses will compete for the purse of 72,000,000 Yen in this G3 event. The participants are about to cover the distance of a mile and one and a half furlongs, and the leading victory candidate seems to be five-year-old T O Keynes.

The Daisuke Takayanagi bound chestnut recorded three wins in a row in 2021, scoring also the G3 Antares Stakes, and even though he then finished only fourth in Kanazawa, T O Keynes absolutely made amends for it when destroying the competition in the G1 Champions Cup. Suggesting to be currently one of the best dirt specialists in Japan, his clams in the Saudi Cup in Riyadh were perceived as quite strong; however, T O Keynes started to fade even before the closing stages and had to settle for the eighth position.

When looking at his career, the chestnut tends to pick a weaker day from time to time; moreover, it was just his seasonal debut among a very strong company, so returning home and only to the G3 level, he should be the key player here. After all, T O Keynes is the only G1 victor in the field.

Although he didn’t succeed whenever facing G1 competition, seven-year-old Suave Aramis delivered a great performance in January, scoring the G2 Tokai Stakes over a mile and a furlong. Back then, he left Auvergne in second.

This six-year-old horse bagged both the mentioned G2 event and the Heian Stakes in 2021, but the second place behind Suave Aramis was the only time he placed since. Otherwise, his efforts were strongly below par, and when meeting T O Keynes, he was easily beaten.

The same goes for Meisho Hario, who finished seventh in the G1 Champions Cup, but since 2021, the five-year-old horse has been presenting himself as a great G3 performer, bagging two races at the stage.

Last time out, Meisho Hario succeeded in the G3 March Stakes, leaving consistent and always hard-trying Bullbear Iride back in third. Once again, the six-year-old horse should snatch up a place.

Must be T O Keynes, as he’s outstandingly won the G1 Champions Cup. If he reappears in such form, the rest of the field will find it difficult to oppose him.

Sign up and get up to a 10% horse rebate. We have the biggest rebate! Check our Preakness Stakes odds, horse racing entries, and races results.

Follow us on Social Media for instant Japanese Oaks updates!