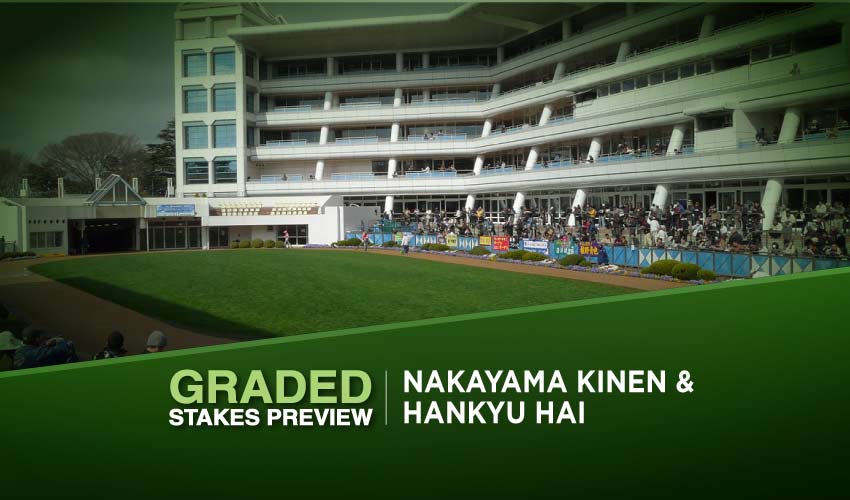 In this weekend’s look at the Japanese Graded scene, two races are definitely worthy of our attention. At first, the G3 Hankyu Hai is held at the Chukyo Racecourse, while it’s considered a trial for the G1 Takamatsunomia Kinen and horses like Mikki Isle, Lord Kanaloa, or Resistencia used Sunday’s race as a stepping stone in their respective, successful seasons.

The Nakayama Kinen is then held at the Nakayama Racecourse and offers a fine opportunity for four-year-old Danon The Kid to kick off the year 2022 with a victory.

The G3 race is open to four-year-old and older horses who are about to cover the distance of seven furlongs. On the turf surface, the event with the purse of 82,520,000 Yen attracted a field of fourteen participants with no clear favourite.

Regarding the current odds, the leading chance looks to be Diatonic trained by Takayuki Yasuda; however, the seven-year-old horse hasn’t won since June 2020. Back then, he was a decent horse as he, after scoring a few Stakes races, went on to bag a G2, finished third in the G1 Takamatsunomia Kinen, and then won the mentioned G3.

Subsequently, he failed to impress in three next starts, then had only one outing in 2021, while in 2022, he finished fourth in the G3 Sports Nippon Sho Kyoto Kimpai over a mile. The results could suggest that Diatonic was tired, his overall form deteriorating, and despite the fact his 2022 debut was promising, he may enjoy a bit longer track than seven furlongs.

For this reason, we’d slightly more prefer Grey in Green , who is suited by the distance; moreover, the four-year-old colt could be still capable of some progress. In January, he scored his second Stakes victory in Chukyo thanks to a nice turn-of-foot in the final stretch while the grey looked eager to take on the even better competition. The Yasutoshi Ikee bound colt has failed in both of his Graded attempts, but he mightn’t have been mature enough to succeed.

Taisei Vision is another contestant to consider, given he took fourth in the G2 Hanshin Cup last time out, and even though it seems his best days are behind him, he could snatch a fine place here.

He’s yet to run in 2022, which also applies to six-year-old Eighteen Girl , who could’ve belonged among favourite here as he won a G3 in her most recent start; however, she just once ran further than six furlongs. Since March 2019, she was aimed at a shorter trip where she bagged, for example, the G3 Keihan Hai in November, leaving Taisei Vision behind.

If she handles an additional furlong, she could cause an upset here. The last to mention is seven-year-old Travesura, who hasn’t hit the track since May 2021 when he was second in a G2, after finishing fourth in the G1 Takamatsunomia Kinen. If he remembers the form, he might be a victory candidate; still, he’s never been a particularly consistent performer.

Our top pick for the Hankyu Hai is Grey in Green as he’s in form, willing to perform, and in the prime of his racing career.

The other weekend’s race in Japan we are about to cover is also open to four-year-old and older horses who will compete at the distance of a mile and a furlong.

The G2 turf race welcomes a field of sixteen participants, vying to achieve most of the purse of 129,320,000 Yen. The leading candidate belongs among the four-year-old contestants – Danon The Kid trained by Takayuki Yasuda.

The talented bay didn’t draw on his triumph from the G1 Hopeful Stakes in 2021, unable to get into contention in the Japanese 2000 Guineas; still, he snatched places in the G2 races and concluded the season of 2021 with a third place in the G1 Mile Championship.

Thanks to his most recent effort, Danon The Kid sort of rekindled the spark we used to see in him, and therefore if he transforms this form and the spark to Sunday’s event, he should win. After all, none of his rivals has displayed such a class recently, and the distance of a mile and a furlong should go well into his stride.

In the Japanese 2000 Guineas, the mile and a quarter long Satsuki Sho, meant a disappointing result for Danon The Kid, but his rival, Admire Hadar, ran a better race back then, seizing the fourth place after bagging two Listed triumphs.

He failed to deliver in the Japanese Derby, and after a pause, he returned with a second place among a Listed competition in January. His real class is a question, given he has only two Graded outings under his belt, both of them in Classic races, so unlike Danon The Kid, he hasn’t met any of the older stars.

Sunday’s race should suggest where Admire Hadar could stand in terms of class as he’s about to face, for example, Panthalassa, victor of the G3 Fukushima Stakes in November. The five-year-old horse is no champ but sprang some solid form in autumn, so despite having a zero impact in the G1 Arima Kinen, he might play a role in the Nakayama Kinen where he should appreciate a shorter trip.

Six-year-old Karate should always be mentioned thanks to his consistency at the Stakes, Listed, and G3 stage, while this time, he is expected to run well in this G2 race as the rest of the field doesn’t look much appealing. Humidor and Galore Creek are place aspirants at best.

Our betting pick for the Nakayama Kinen is:

Danon The Kid, whose third place in the G1 Mile Championship behind great Gran Alegria can’t be ignored. He’s a smart, willing colt capable of lining up with the Japanese elite, so this competition shouldn’t be a problem.

Follow us on Social Media for 2022 Nakayama Kinen updates!