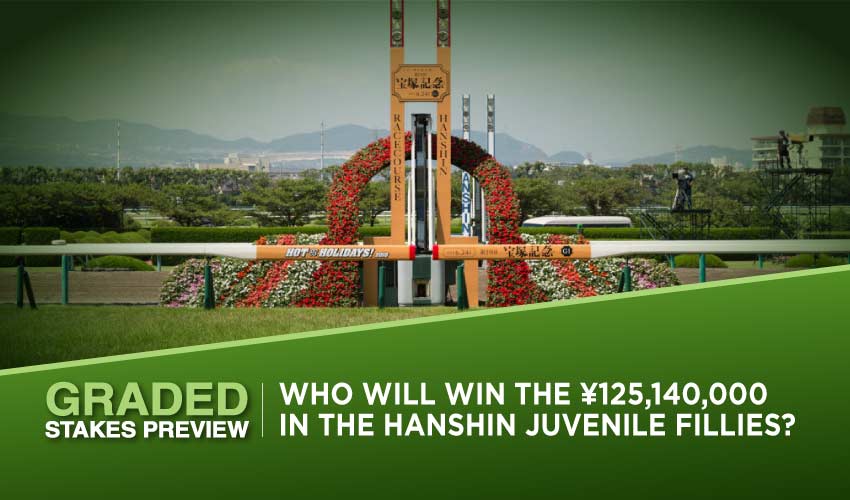 The upcoming weekend brings at least two interesting races held in Japan as especially the G1 at the Hanshin Racecourse promises a great battle among two-year-old fillies. The Hanshin Juvenile Fillies is a turf contest won by Sodashi, Lucky Lilac, or Resistencia in the most recent editions, so we may see a new star to be born on Sunday, while the most likely victory candidates seem to be Namur or Circle of Life.

The card at Nakayama promises the G3 Capella Stakes for three-year-old and older sprinters, whose field is hard to read, given most of the participants hasn’t succeeded at the Grade scene yet, or have some questions marks surrounding them in relation to the race overall. Still, the G1 winning mare Mozu Superflare is definitely an interesting runner here.

The G1 turf race is open only to two-year-old fillies, while the event is unofficially considered the season’s pinnacle for these junior fillies as they will compete for the purse of 125,140,000 Yen at the distance of a mile. Jockey Cristian Demuro has a great chance of scoring a big one on Sunday as he’s about to partner Namur (9-10) trained by Tomokazu Takano, given the daughter of Harbinger is unbeaten in two outings, bagging primarily the Akamatsu Sho over a mile. She left behind also Personal High (80-1) or more preferred rivals.

Her victory was clear, so if she shows something similar on Sunday, she should belong among the victory candidates. The same goes for Circle of Life (15-2) with Mirco Demuro, the brother of the first-mentioned jockey, as the Sakae Kunieda bound filly has two victories under her belt, including a win in the trial for the Hanshin Juvenile Fillies, the G3 Artemis Stakes where she bettered Bella Cresta (28-5) despite being totally underestimated there. Circle of Life drew on her success from the Maiden race nevertheless by a neck; moreover, she finished her debut in third place behind excellent Equinox, which should’ve picked somebody’s attention last time out, too. Bella Cresta was expected to run a good race back then as she was second to Serifos in her debut, upon which she won a Maiden. She’s also in the mix for Sunday’s race.

In terms of another trial for the Hanshin Juvenile Fillies, Water Navillera (8-1) was a sure winner of the G3 Fantasy Stakes at Kyoto, where she bettered Namura Clair (15-1) by ¾ of a length at the distance of 7 furlongs. Both fillies are about to face tougher competition here, yet, they might’ve improved enough to play impactful roles here, especially Water Navillera, who’s, in fact, unbeaten in all three of her starts.

Prior to the G3 success, the Koshiro Take bound filly scored Saffron Sho, too, and having Yutaka Take aboard on Sunday; her triumph wouldn’t be surprising in the slightest. Regarding the jockeys whose mounts are always worthy of attention, Christophe Lemaire is definitely the one as Sternatia (14-1) finished the G3 Saudi Arabia Royal Cup in second but lost only to colt Command Line. Her performance wasn’t bad at all, and thus, she should be respected here, which applies to Namura Lycoris (60-1), too. She might not belong among the favourites for Sunday’s race; however, she’s a G3 winner, even though at a much shorter distance.

Our betting pick for the Hanshin Juvenile Fillies is:

Bella Cresta, who is experienced, handles the distance, while her trainer Naosuke Sugai has a good record in the race, winning it in 2020 with Sodashi and back in the past with a half-sister to Bella Cresta. For the current odds go to horseracingtote.com

The G3 event held at the distance of 6 furlongs attracted a field of 16 three-year-old and older horses who will compete for the purse of 68,820,000 Yen on the dirt surface. Most of the participants will head for the race from lower categories; however, Mozu Superflare () trained by Hidetaka Otonashi has enjoyed even a G1 victory throughout her career as she bagged the Takamatsunomiya Stakes in 2020, beating star mare Gran Alegria. The six-year-old daughter of Speightstown has also scored a G3 win and amassed some places among the elite as she finished fifth in the G1 Sprinters Stakes in October, upon which he was third in a Listed race at Kanazawa.

Still, the distance of 7 furlongs could’ve been far for her back then, so returning to six-furlong should suit her; the question is how good she actually can be on the dirt surface. Mozu Superflare will meet some dirt specialists here, so she needs to confirm she can handle such a change; otherwise, Omega Rainbow () could draw on his fine performance from the G3 Musashino Stakes, where he lost only to two on his rivals. The five-year-old horse seems good enough to cope with the G3 competition; however, he’s been mainly pointed to the longer distances where he delivered some decent results for the connections, but unlike Dancing Prince (), he hasn’t had many starts on such a short trip.

The mentioned charge of Keisuke Miyata finished the Capella Stakes in third in 2020, while it was his only loss at the Nakayama Racecourse. Otherwise, the five-year-old has gathered three victories here, including the Listed Keiyo Stakes in April. Still, he hasn’t hit the track since, which could be an issue, especially when facing rivals who have already struck gold during autumn. Namely, we’re talking about six-year-old gelding Discerning () and a couple of three-year-olds, Misuzu Grand O () and Dualist (), who might be classy enough to play a role here.

Our top horse betting pick for the Capella Stakes is:

Mozu Superflare, who showed her class when competing at the highest stage, so heading for this G3 event, she should prove her ability here. The surface is a question, though. For the current racing odds go to horseracingtote.com

Sign up and get a 10% rebate. Make sure to stay tuned for the latest Horse Racing results, and racing entries.

Follow us on Social Media for instant The Hanshin Juvenile Fillies updates!