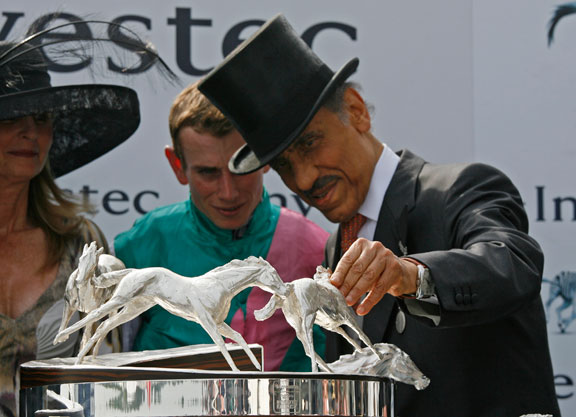 To say that Prince Khalid was prolific during his time in the sport is putting things rather mildly. Over the years, he owned over 500 stakes winners. All the more impressive is that 440 of those winners were bred by him, too.

Given that information; it is perhaps no real surprise that Prince Khalid received so many awards and acclaim during his career. He won four Eclipse Awards for top owner and five for top breeder. Arrogate, Empire Maker, and Enable were just a few of his better-known horses.

Last week, we saw Mucho Gusto forced into retirement; and now this week we have horse racing news that multiple stakes race winner Thousand Words will also be retiring. The 4-year-old son of Pioneer of the Nile will head to Spendthrift Farm in Lexington; Kentucky, where he will be put to stud.

Thousand Words did not take long to get started with accumulating wins; breaking his maiden in his first race at Santa Anita Park as a 2-year-old. He then followed that up with a win at the Los Alamitos Futurity (G2), making for a great juvenile season. In his 3-year-old-season, Thousand Words had wins at the Robert B. Lewis (G3) and the Shared Belief Stakes, setting himself up as one of the top contenders for the Kentucky Derby. Unfortunately, he never got to start in the Run for the Roses, as he was scratched after a paddock accident.

Thousand Words had four wins and a second in his 9-race career, earning $327,500 in the process. He will now be part of the “Share The Upside” breeding program at Spendthrift Farms; with appointment only inspections set to begin immediately.

Be sure to check Horse Racing Tote for all the latest horse racing news; previews, and results; as well as up to the minute reports from our experts on the Road to the Kentucky Derby.