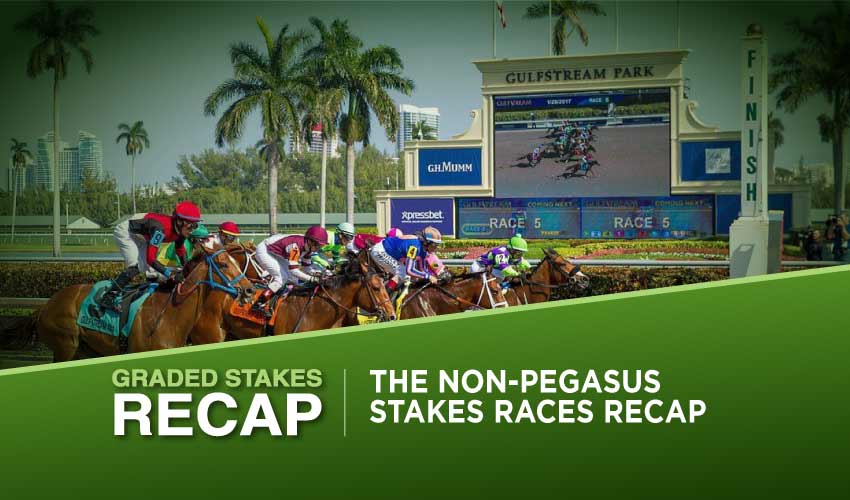 The non-Pegasus stakes races on the undercard at Gulfstream Park on Saturday brought us some thrilling finishes and some very promising performances, notably Just One Time taking the step up to the Grade 2 Inside Information in her stride. Speaker’s Corner maintained his upward trend in the Grade 3 Fred W Hooper, while the route races were won in turn early by Abaan (Grade 3 W L McKnight) and very late by Beautiful Lover (Grade 3 La Prevoyante).

Brad Cox was out of luck in the main event at Gulfstream Park on Saturday, but he picked up a little compensation with the victory of Just One Time in the Non-Pegasus Stakes Races Inside Information, the four-year-old getting it right first time on her debut for the stable.

Just One Time’s previous stakes successes had come in state-bred contests and this was a big step up in class, and when she missed the break and sat some way off the hectic pace set by Dance D’Oro through the first half-mile it appeared that life in the deep end was a little over her head.

But she didn’t sink, she swam. Despite coming very wide on the turn, the 3-2 favourite soon had her nose in front when they straightened up and she displayed plenty of tenacity under Joel Rosario to turn back the sustained challenge of second-choice Four Graces, hitting the wire three-quarters of a length ahead and stopping the clock in 1:23 and four-fifths. Jakarta, who had been in the front rank throughout, was two and a half lengths back in third.

“We would never have brought her if she hadn’t shown us what she shows us in the morning,” said Cox. “For her to be able to stay, especially going seven furlongs off a layoff, showed her determination and a little bit of class.”

This first success in Graded company took Just One Time’s record to five-for-six, and with the Grade 2 under her belt Cox will now consider another step up in class.

It was in the mail, arriving soon, and the Fred W Hooper was the address for delivery as Speaker’s Corner finally made his Graded-stakes breakthrough with a determined front-running performance.

The Bill Mott-trained four-year-old had thrown away his previous shot at stakes success when inexperience let him down in the closing stages of a mile-eighth contest at Aqueduct, but the cut back in distance and a bit more savvy played into his hands here and the 3-2 second-choice did it in style.

Speaker’s Corner took over on the lead after a contested first quarter and had the game to himself from there on in, and although 6-5 favourite Fearless emerged from the pack to challenge at the eighth pole, he could never engage and Speaker’s Corner kept rolling to score by a length and a quarter, covering the ground in 1:36 and two-fifths. Fearless was more than nine lengths clear of longshot Officiating in third.

“It was just a phenomenal performance, I think I was just a passenger today,” said modest jockey Junior Alvarado. “It’s been a bit of a process to build him up and get to this race and he was very good today. He put them all away and still had enough courage to come home strong.”

This victory may convince Mott to leave his improving Street Sense colt – now four-for-seven – at a mile for the time being. The trainer has surprisingly never won the Grade 1 Metropolitan Handicap (Met Mile) at Belmont Park in June, so that is a possible target.

On what was a banner afternoon for Todd Pletcher, the victory of up-and-coming route runner Abaan in the W L McKnight gave him a third success to go with the more lucrative contributions of Life Is Good and Colonel Liam.

The five-year-old has been a slow burner but he has certainly caught fire now with four wins in his last five starts, and although his previous success came over two miles he proved he had the pace to cut back on his Graded stakes debut. Abaan had previously done his best work on the lead, but added a little tactical versatility to his portfolio when following King Cause through the opening mile.

The patient approach was only temporary and the 3-2 favourite made a decisive move on the turn, opening an advantage that he maintained comfortably all the way down the lane. Abaan was two lengths clear of the late-closing Temple at the line, with Media Blitz a staying-on third, three-quarters of a length away. The time for the mile and a half was 2:29 and one-half.

“We got into a perfect spot,” said jockey Luis Saez. “Everything worked out pretty great, like we planned. When we got to the top of the stretch, he just took off.”

Save the best till last, they say, and that’s exactly what Beautiful Lover did in the La Prevoyante, signing off her racing career on a high when coming with an irresistible late challenge to claim her first Graded stakes.

Before the gates opened, the race looked to be at the mercy of last year’s winner and even-money favourite Always Shopping, and when she passed the quarter pole a length and a half in front it seemed the predictions would come to pass. However, her rivals were all stacking up behind her, and when Joel Rosario switched Beautiful Lover out from behind horses she began to roll.

The result was still in doubt inside the final sixteenth but Beautiful Lover wouldn’t be denied, and the 4-1 second-choice came out on top in a blanket finish by a neck from barnmate Sorrel, with Always Shopping a head back in third and longshot Scarabea only a neck further away in fourth. The distaffers took almost exactly a second longer than the boys over the same distance in the W L McKnight.

“I always thought she was good enough to win a Graded stakes,” said trainer Christophe Clement. “She did it today and now will become a broodmare. We’re all very happy with her.”

Follow us on Social Media for The Non-Pegasus Stakes Races updates!