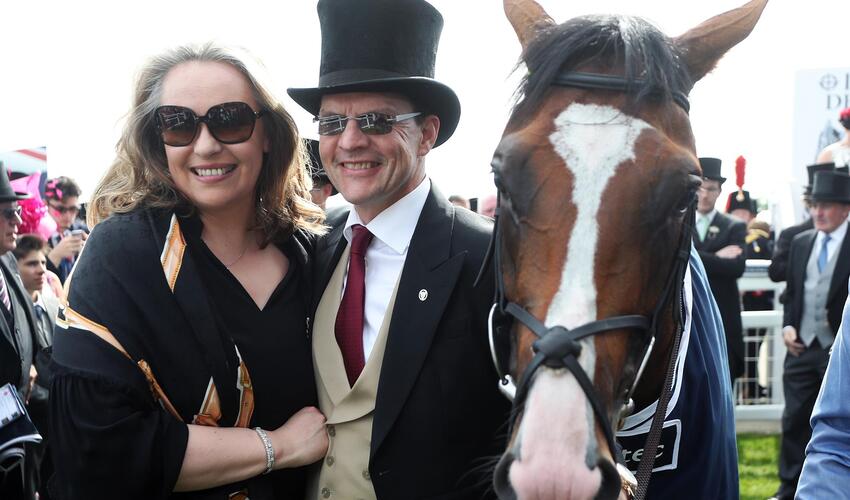 From his state-of-the-art base in the depths of the Irish countryside, Aidan O’Brien has risen relentlessly to become the best trainer in the world. His greatest horses are household names, he has welcomed home winners from every corner of the world, he goes about his business with a blend of scientific excellence and innate horseman’s genius. Here we look at O’Brien’s path to glory, the horses who have taken him there, and the future for Ireland’s first racing family.

Quiet man whose deeds speak for themselves

From a distance he looks like Clark Kent. It’s only when you examine his achievements that he turns into Superman.

It doesn’t matter where you start. Nine Derby winners; 95 Classics in Britain, Ireland and France; a world record of 28 Group/Grade 1 winners in a calendar year; 13 Breeders’ Cup winners. And there’s no knowing where it ends. Aidan O’Brien, a quiet, modest, softly-spoken man, a genius with horses, is almost certainly the best trainer in the world.

O’Brien, 52 in October, comes from a farming family, and got his break in racing in the late 1980s with master trainer Jim Bolger, whose ascetic nature – no smoking, no alcohol, hard work and discipline – mirrors that of O’Brien, although O’Brien is a much more genial fellow. Of course, assistants come and go, but Bolger knew there was something different about this one.

“When you asked him to do something or told him something, you only had to tell him once,” he remembers. “He was like a sponge. He used to mop it all up.”

It didn’t take long for O’Brien to demonstrate his potential. In 1993 he took over his father-in-law’s yard from his wife Anne-Marie, and became champion trainer over jumps in Ireland the following year. Two years later, he was headhunted by the all-powerful Coolmore operation to take control at Ballydoyle, in the green Tipperary heartlands of Ireland, from where the greatest-of-all Vincent O’Brien (no relation) had trained the likes of Nijinsky, The Minstrel and Sir Ivor.

In his first full year he won the Irish 2,000 Guineas and Irish Derby with Desert King, beginning a dominance that continues to this day. O’Brien is a perfectionist, everything in his yard is micro-managed, measured, calibrated, assessed. The attention to detail at Ballydoyle is on a forensic scale, even down to the construction of a gallop identical to the idiosyncratic up-and-down track at Epsom, so that his Derby horses can be prepared sufficiently for their big day.

Every workout is timed, every horse wears a heart monitor, every work-rider wears an earpiece connected to the ‘boss’, every week in early season the two-year-olds are ranked in a pecking order so that the best of them are given names that have been held in reserve for a potential superstar.

He is provided with the best bloodlines in the world, most of them from horses he has himself trained, a head start on other trainers for sure, but O’Brien wrings the absolute maximum out of every horse he is given. As a realiser of potential, he has no peers, and his hard-nosed employers would soon have looked elsewhere if O’Brien had been merely a very good trainer.

To list his best horses and biggest races won would take much more than the space allowed. He has won every race worth winning in Europe and trained champions at every racing discipline, including over jumps, in which sphere he won three Champion Hurdles at Cheltenham with the magnificent Istabraq. O’Brien trained Yeats to win the Gold Cup at Ascot, over two and a half miles, a record four years running. His champion sprinters include Stravinsky and Mozart, his great milers number Giant’s Causeway, Rock Of Gibraltar and Rip Van Winkle, among very many others.

His best fillies have been Minding, Found and Magical, and a short selection of his middle-distance champions might include Galileo, High Chaparral, Dylan Thomas, Australia and this year’s powerhouse St Mark’s Basilica. The only thing O’Brien lacks on his resume is an all-time great, a universal champion in the mould of a Frankel, a Brigadier Gerard, a Secretariat or an American Pharoah. He has trained so many greats but not yet a truly outstanding one; there’s plenty of time.

O’Brien’s achievement of training 28 top-level winners in a calendar year during 2017, taking the record from the late Bobby Frankel, is arguably his greatest, a globally recognised feat to which all might aspire. In that year he trained top-level winners on three continents, an unparalleled breadth and reach. On a more local level, perhaps his 1-2-3 in the 2016 Prix de l’Arc de Triomphe, Europe’s most prestigious race, stands out from a crowd of similarly dominant displays, such as in the 2019 Derby when O’Brien’s horses finished 1-3-4-5-6.

“I have enormous respect for the quality of Aidan’s horses and the superb training of them. Annoyingly, he’s getting better and better,” says fellow champion trainer John Gosden. “Any time you compete against him you know you are absolutely taking on the pinnacle.”

His sons are following his footsteps

O’Brien is now the head of a training dynasty, with his sons Joseph (28) and Donnacha (23) following in their father’s footsteps and adding further lustre to the family name. Both young men were jockeys and rode Classic winners for their father – Aidan and Joseph are the only father-son combination in history to win a Derby, with Camelot and Australia – and both have begun their new careers with some style.

Joseph has won the Melbourne Cup twice, the Irish Derby and at the Breeders’ Cup, while Donnacha won the French Oaks in his first season with a licence. O’Brien’s daughters Sarah and Ana have also ridden winners on the racecourse, and are now valuable members of the staff at Ballydoyle.

Perhaps one day Joseph or Donnacha may ascend to the throne of Ballydoyle, inherit one of the finest training centres in the world, continue the success across the generations like the bloodlines of the horses they train. Nothing would give their father greater pleasure. Before that, though, there will be many more records set, many more great horses trained, many more embellishments to the legend and legacy of this mild-mannered conqueror of racing’s empire.

Follow us on Social Media for instant Aidan O’Brien updates!