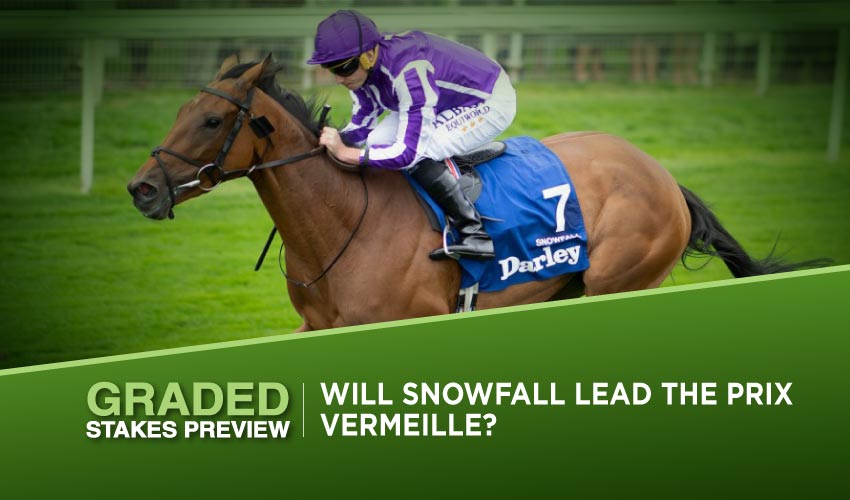 As this weekend in Europe is packed with high-quality action once again, we cannot omit to mention the day of the Prix de l’Arc de Triomphe trials at Longchamp, France. The Prix Vermeille for fillies and mares is the peak of the Sunday’s card and we look closely at it in this article. The G2 Prix Foy also looks exciting, though, as G1 winner Broome is going to clash with another high-class contestant, Skaletti.

The turf race open to three-year-old and older fillies and mares is run over a mile and a half, and the purse of €600,000 attracted 9 participants, including Aidan O’Brien superstar Snowfall (4-9). The G1 Prix Vermeille was won by such phenomenal fillies and mares like Treve or Zarkava, while Snowfall is expected to walk in their footsteps this year. The daughter of Japanese star-sire Deep Impact didn’t show anything special during her junior campaign. Still, upon entering the 2021 season, she seems to be an utterly different filly, being unbeaten in four starts in a row. At first, she won a G3 race at York, which was a good sign, but nobody has probably foreseen her destroying the field of Epsom Oaks by 16 lengths.

Snowfall just thrived over the mile and a half, confirming her exceptionality also in the Irish Oaks and Yorkshire Oaks, where the bay filly also faced older mares. Judging from everything we saw she’s capable of, she should win the Prix Vermeille quite easily. Still, another O’Brien filly is classy and tough and the only participant who might pose a challenge for the favourite.

We’re talking about Joan of Arc (9-1), an Irish raider successful at French tracks. The three-year-old bay ran just once before she commenced the new season, and even though she was green in spring, Joan of Arc managed to bag a G3 victory followed by a close second place in the Irish 1000 Guineas. The talented Galileo filly showed a lovely turn of foot; however, she didn’t need to work hard to score her first G1 afterwards.

She just sat behind the leader in the Prix de Diane (French Oaks), and when the jockey urged her forwards, Joan of Arc romped to the first place and won easily. Last time out, she ran a good race by finishing third in the Nassau Stakes against older mares, upon which she’s going to try the distance of a mile and a half for the very first time. Just by the look at her and her performances, she seems capable of taking the trip. British Teona (9-1) could pick up the pieces and the France-bound Philomene (12-1) is the last to mention here as she was second to Joan of Arc in the Prix Diane, though she doesn’t look like a stayer in the making.

Snowfall is expected to deliver once more as neither of her rivals has shown such a class and ability this year. Joan of Arc should follow her home.

Follow us on Social Media for instant Prix Vermeille updates!