The richest prize in racing awaits the 2022 Saudi Cup Winner 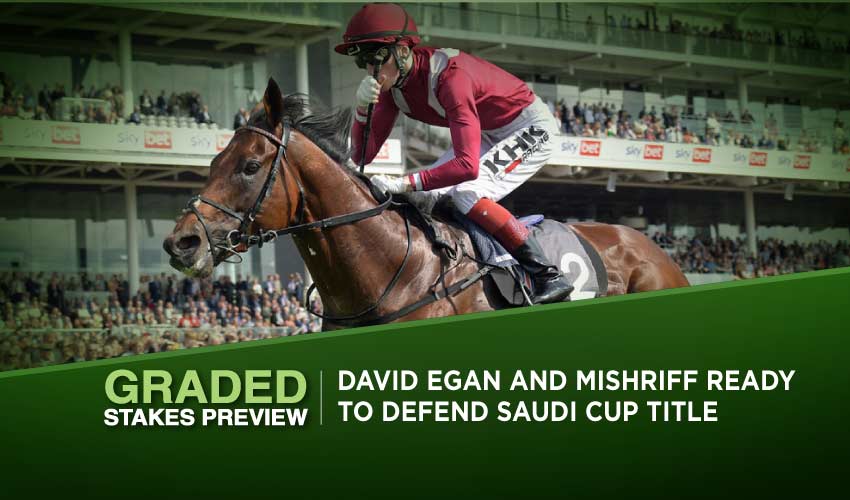 The richest prize in the world awaits the winner of the 2022 Saudi Cup, the centerpiece of Saturday’s glittering stakes-heavy card in Riyadh, with around $10 million for the first horse home in the Group 1 contest.

Last year’s winner Mishriff is favourite to repeat but faces very strong opposition in the shape of US stars Mandaloun and Art Collector, Japanese improver T O Keynes and Godolphin hope Real World, who is on the hunt for a six-timer.

**There is no betting on-course in Saudi Arabia, and no morning-line. The odds quoted are taken from Jazzsports, are in-play at the time of writing and consequently may vary, and are included as a guide to the relative merits of each horse rather than a prediction of final odds.

Twenty million buys plenty, even in these inflationary times, and the size of the purse has drawn a star-studded field for the 2022 Saudi Cup, the richest race on the globe and the fascinating highlight of Saturday’s meeting at Riyadh racecourse.

Ten of the 14 runners have at least some sort of claim to the win, and with four horses from America, two from Japan, two from France and two from Britain, as well as one from Uruguay, the Saudi Cup can claim to be one of the most cosmopolitan races in the calendar, and this year also one of the most competitive.

Last year’s winner Mishriff returns to defend his title, and if he wins again he will break the world record for prize-money, becoming the biggest earner any time, anywhere. He has an excellent chance of doing so, for he ended 2021 as one of the highest-rated older horses in the world and his form is rock-solid.

His versatility is extraordinary; he has won top-level races from nine furlongs to a mile and a half, on dirt, on fast ground and in the mud, right-handed and left-handed. He can be forgiven his slightly flat effort when fourth in the Group 1 Champion Stakes at Ascot in October, as his two worst performances have come in that race and the very holding ground blunts his change of gear.

However, it did take him almost the whole of the long Riyadh straight to reel in Charlatan 12 months ago, and it’s no secret that today’s distance is at the very bottom limit of his capabilities. He prefers another furlong or so, and he benefited from sitting behind a speed duel last year – at this distance he needs pace to run at.

The best of the US contingent is Mandaloun, who we can now call last year’s Kentucky Derby winner after the disqualification of poor Medina Spirit. This distance is perfect for him, as he demonstrated when running a huge race in the nine-furlong Grade 1 Haskell at Monmouth Park in July, getting the race on a DQ after being beaten a nose by Hot Rod Charlie.

He has therefore gained both his biggest wins courtesy of the stewards, but don’t let that detract from his talent. Last time out in the Grade 3 Louisiana at the Fair Grounds, on his first start for five months, he sat off the fractions set by Midnight Bourbon before putting that race-fit rival away in some comfort, the margin of three-quarters of a length no reflection of his superiority. He’ll be wound tight today and will find more.

The frustrating Midnight Bourbon has plenty of ability but invariably finds a way to get beaten, being two-for-14 lifetime and coming here on a nine-race losing streak. He will try to lead as usual, but it’s very hard to see him staying ahead down a stretch that is much longer than those he is used to.

His fellow Americans include Art Collector, winner of the Grade 1 Woodward at Belmont Park from that soft target Maxfield before finishing sixth in the Breeders’ Cup Classic behind Knicks Go. Art Collector is another pace angle but, as just outlined, it’s hard to make that stick down this long stretch.

Country Grammer must overcome a nine-month layoff following his victory in the Grade 1 Hollywood Gold Cup at Santa Anita, and both that form and his overall body of work – in addition to that long layoff – suggest he is in a tough spot.

A bigger threat could come from Japanese improver T O Keynes, who left his previous form far behind when taking a wrecking ball to the Grade 1 Champions Cup over this distance at Chukyo in December, hauling off to beat Dubai World Cup runner-up Chuwa Wizard by six lengths. If that wasn’t a one-off, if he can do it again, he will be a danger to all, although his odds are skinny enough in this company.

His compatriot Marche Lorraine was a fortunate winner of the Breeders’ Cup Distaff at Del Mar, picking up the pieces at boxcar odds after a reckless speed duel had blown the race apart, and that sort of lightning is very unlikely to strike twice.

No international race is complete without a Godolphin runner or two, and their best hope lies with the relentlessly progressive Real World who comes here looking for a six-timer after moving through the ranks with panache. His recent score in a Group 2 at Meydan will have put an edge on him, but he has never won on dirt (zero-for-four) and this is by far the toughest test of his career.

Fellow ‘boy in blue’ Magny Cours was third in what in hindsight was a pretty poor race for the Dubai World Cup last year and didn’t build on that through the rest of his campaign. It’s wise never to ignore one of trainer Andre Fabre’s horses but Magny Cours makes little appeal in this hot contest.

Also shipping in from France is Sealiway, a very good horse but only on soft turf, as it was when he won the Group 1 Champion Stakes at Royal Ascot (Mishriff fourth) and ran fifth in the Group 1 Prix de l’Arc de Triomphe at Longchamp. There’s no knowing how effective he will be on dirt and his best work has come over at least a furlong further than today’s distance.

Betting Prediction for the Saudi Cup:

This is an absolute cracker and Mishriff will make a bold bid for a repeat win, but everything – class, distance, surface, recent form – looks right for MANDALOUN to strike.

Follow us on Social Media for instant Road to the 2022 Saudi Cup updates!