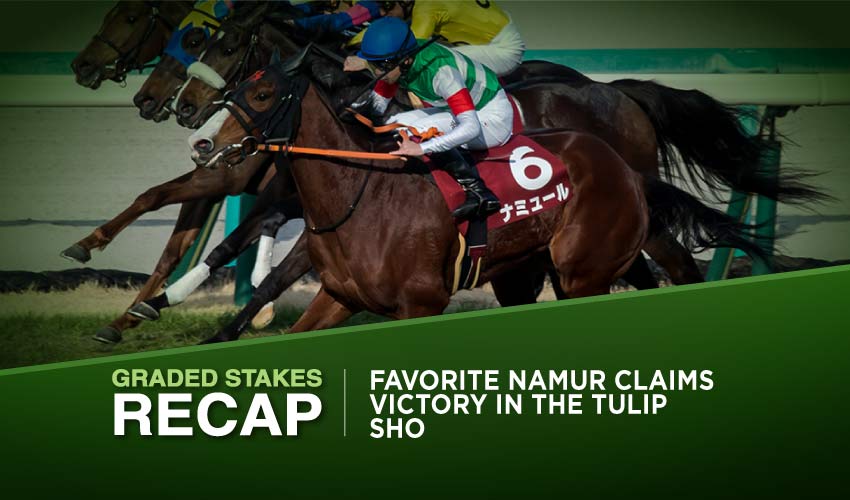 The past weekend at the Japanese tracks offered three Graded races, including a couple of prestigious trials towards Japanese Classic races. In The Tulip Sho, Namur prevailed among three-year-fillies at the Hanshin Racecourse, while Ask Victor More caught Do Deuce off guard in the G2 Deep Impact Kinen, held at the Nakayama Racecourse where seven-year-old Gendarme reminded himself as a Graded performer when winning the G3 Ocean Stakes.

The G2 turf race saw Namur (6-5) making amends for her disappointing performance in the G1 Hanshin Juvenile Fillies. In Saturday’s event, fifteen three-year-old fillies clashed in this trial for the Japanese 1000 Guineas on the distance of a mile, while 100,520,000 Yen was up for grabs.

The Tomokazu Takano bound Namur faced especially Circle of Life (23-10) here who scored the mentioned G1 thanks to her brilliant turn-of-foot, and it could’ve been enough again if Namur and Pin High (230-1) didn’t have luck on their side. Namur spent the race in the midpack, and piloted by Takeshi Yokoyama, she again bumped into some serious trouble with the lack of space, but the jockey managed to switch tracks with his mount in time.

In the end, Namur was able to rally forward so that she swept by fighting duo Circle of Life – Sound Vivace (36-1) and finally bagged her premiere Graded victory. The daughter of Harbinger crossed the wire in 1m 33.20s with the advantage of one and ½ over outsider Pin High who also struggled to romp forward; however, jockey Ryo Takakura urged her to make herself some space at the fence. Thanks to this manoeuvre, the filly with just once outing under her belt snatched second place in front of Circle of Life.

In a remarkably close finish in this G3 turf race, seven-year-old Gendarme (22-5) finally showed off his real strength when taking most of the prize of 82,550,000 Yen when scoring his only second Graded victory of the whole career. He’s won some Listed races; while he was expected to deliver a fine run among four-year-old and older horses over the distance of six furlongs, still his most recent three outings didn’t go well.

However, Saturday’s company wasn’t that tough, so it’s no wonder that Gendarme galloped near the front, and once Kiwamu Ogino aboard urged his mount to take command, the Yasutoshi Ikee willingly obeyed and held onto the first place until the very end. Crossing the wire in 1m 7.90s, Gendarme recorded a narrow victory with the advantage of ¾ of a length over Naran Huleg (36-5), who was literally flying on the outside. Bein Fait (81-10) took the third place.

A certain surprise occurred in this G2 turf trial for the Japanese 2000 Guineas as hugely anticipated Do Deuce (6-5) failed to fulfil the role of a favourite among three-year-old colts as he was bettered by Ask Victor More (57-10), who he had already beaten in the past.

With the purse of 104,620,000 Yen up for grabs, eleven participants met on the distance of a mile and a quarter, and Ask Victor More was quite restless initially, so Hironobu Tanabe let him gallop next to the leader. The Yasuhito Tamura trained colt spent the whole race in the same spot, then switched for the lead in the final stretch, and his only goal was to hold on as his rivals were coming. However, they couldn’t finish powerfully enough to actually get in front of Ask Victor More, who prevailed by a neck in 2m 0.50s.

Favourite Do Deuce tried to get outside at first, and when he managed, he closed on the subsequent victor yet failed to better him. He wasn’t rolling forward as intensely as we would’ve expected, so he had to settle for a second place before third Born This Way (245-10).

Follow us on Social Media for instant The Tulip Sho & Nakayama Racecourse updates!