TITLEHOLDER VICTORY IN THE KIKUKA SHO 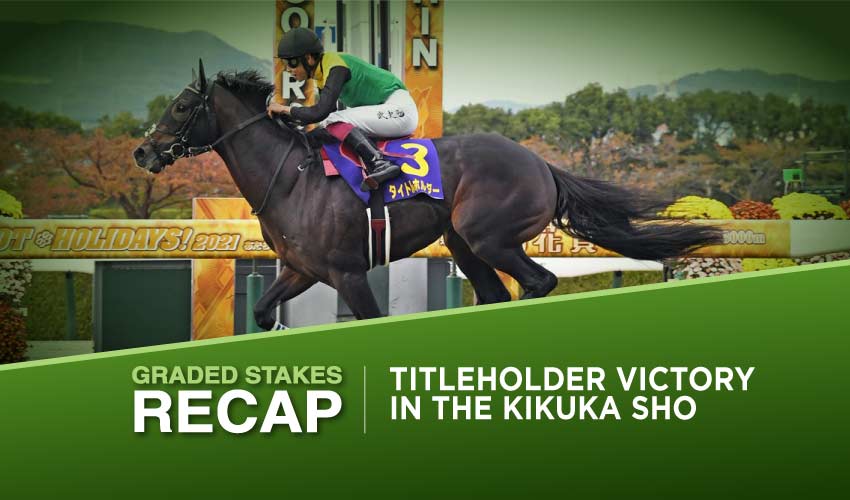 Although Sunday’s Japanese St Leger couldn’t bring another Triple Crown winner, the G1 race for super-stayers turned out to be a fascinating event to watch as Titleholder managed to cover the distance from the front and score a dominant victory. After last year’s exploits of Contrail, the race known as Kikuka Sho simply saw another star shine ever so bright even though it didn’t happen at the usual venue of the Japanese St Leger. The Kyoto Racecourse is being renovated, so it was run at the Hanshin Racecourse.

The G1 turf race was held at the distance of a mile and seven furlongs, and being the last part of the Japanese Triplecrown, the purse of 270,970,000 Yen attracted a large field of 18 three-year-old horses. However, neither of the Classic winners showed up here, so the race was quite wide open, which Titleholder aboard with by Takeshi Yokoyama exploited to the fullest. The Toru Kurita bound bay placed second in the 2000 Guineas but hasn’t shown anything special since then, while it was up for the debate whether his awakening could happen in the longest of Japanese Classic races, moreover, when Titleholder set such a devastating pace at the beginning of the event.

He bolted forward right away and managed to scatter the field remarkably. As the leader slowed down subsequently at the initial stage, all the contestants bunched up a little; however, the Kikuka Sho was simply a one-horse race, so when the field reached the final turn, Titleholder sped up once again. In the stretch, he drew clear on all of his rivals, who soon enough must’ve realized they couldn’t catch the front-running bay. Titleholder scored his first G1 victory by commanding five lengths in 3m 4.60s, with the rest of the field fighting only for the other place. Orthoclase (22-5) charged powerfully from the rear of the field to grab second ahead of Divine Love (163-10), the only filly running in the Japanese St Leger.

Titleholder’s remarkable performances overshadowed the efforts of his rivals; still, it’s necessary to say that neither of the horses following the leader most closely didn’t handle the pace and finished down the field. Only Divine Love fought heartily for the second place in the final stretch; however, preferred participants like Orthoclase and Stella Veloce (31-10) ran outside. The latter arced the last turn very wide, wasting some of the energy, and thus as Orthoclase managed to outrun Divine Love, the former favourite Stella Veloce had to settle for fourth. The other two considered runners, Red Genesis (29-10) and Asamano Itazura (121-10), made no impact whatsoever.