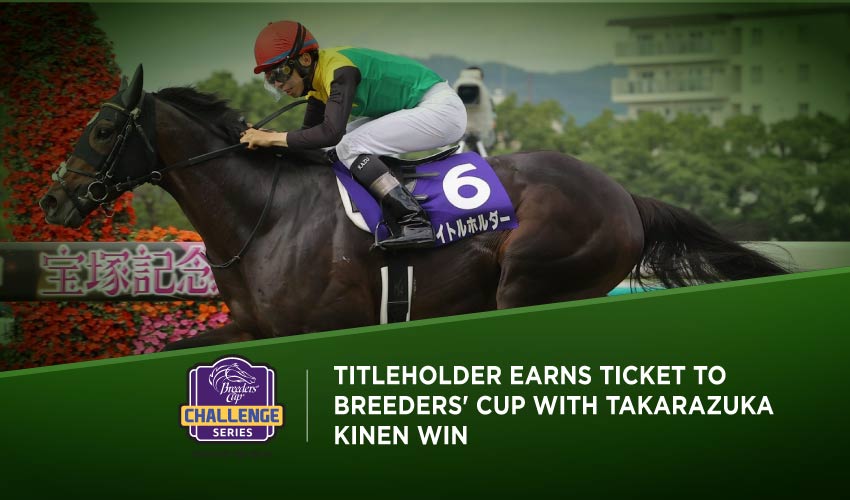 On Sunday, some brilliant horses clashed in the G1 Takarazuka Kinen at the Hanshin Racecourse in Japan. Like in the Arima Kinen, the racing fans vote for the horses they want to see them competing in this prestigious event over a mile and three furlongs, while the victorious colt Titleholder was one of those participants with a big fan base.

The four-year-old bay triumphed here easily, and besides securing himself a berth in the Breeders’ Cup Turf, speculations about possible Titleholder’s tilt at the Prix de l’Arc de Triomphe arose immediately after the race.

The G1 turf race was held over the distance of a mile and three furlongs, while the purse of 385,400,000 Yen was up for grabs for the field of seventeen three-year-old and older horses. Titleholder (16-5) was quick out of the gate, as usual, settled at the front, and even though he didn’t make the entire race, he was galloping in second, waiting patiently for the question his jockey asked him in the final stretch.

As Kazuo Yokoyama urged him forward, Titleholder willingly regained the lead, drew clear from his rivals, and cruised home to record a third G1 victory in 2m 9.70s. The four-year-old colt triumphed by two lengths before Hishi Iguazu (17-2) in second, with Daring Tact (63-10) securing third place right at the wire.

In 2021, Titleholder crept into the G1 contention after winning a G2 event and running in second in the Japanese 2000 Guineas known as Satsuki Sho, but he had to hit the extralong distance of the local St Leger. Over the two miles-long trip, Titleholder scored from the front, while the Toru Kurita bound colt employed the same tactic also in 2022 when bagging the G1 Tenno Sho in May.

On Sunday, the son of Duramente was once again considered; still, he’s been preferring the longer trips recently and actually, he didn’t compete over such a short distance since his last but one place in the last year’s attempt at the G2 scene.

However, Titleholder was just brilliant, handled everything with ease, and definitely looks like one of the stars shining very bright in Japan, unlike Efforia (23-10). The last year’s best three-year-old colt was disappointing in his seasonal debut and showed nothing of interest on Sunday as well, finishing only sixth.

Hishi Iguazu ran another great race as he’s a consistent six-year-old, and achieving second place in the Takarazuka Kinen belongs among his best career results. Five-year-old Daring Tact didn’t spectacularly enter the season, but this time, the once brilliant three-year-old filly showed a respectable effort.

Running wide the whole race, she tried her best in the final stretch and in the closing stages, she sentenced Deep Bond (23-5) to fourth place. Outsider Meiner Fanrong (174-1) was fifth, taking fifth place by a nose in front of mentioned Efforia.