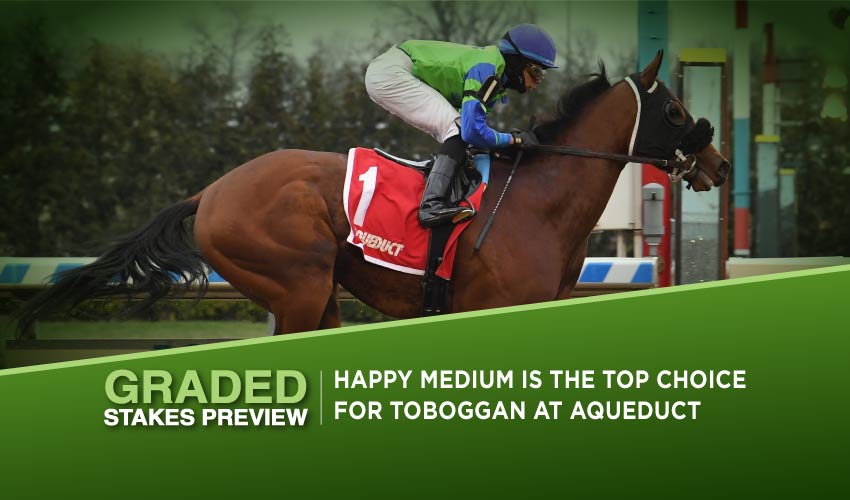 All eyes will be on Gulfstream Park on Saturday, but up the east coast at Aqueduct there’s definitely something to watch out for, as the hugely promising sprinter Happy Medium makes his move into stakes company in the Grade 3 Toboggan, following three impressive wide-margin victories.

Due to weather conditions Toboggan has been canceled, they have moved the race for Feb 5th

It isn’t quite Flightline – and, after all, there’s nothing quite like him – but the Toboggan at Aqueduct on Saturday showcases a fair imitation of that monster.

The odds-makers have taken note. Happy Medium is an overwhelming favourite after three straight wins with an aggregate margin of victory of 21 and a quarter lengths. The four-year-old has been running them out of town, and more of the same is expected on his stakes debut.

Happy Medium has another half-furlong to travel today, which should pose no problems, and right now there is no ceiling on his ability. He receives 4lb from Hopeful Treasure, who ran the race of his life last time out when a game winner of the Grade 3 Fall Highweight over six furlongs here in November, belying longshot odds to get the job done by a head. Hopeful Treasure has won six races but never beyond six furlongs, and it remains to be seen whether he’s capable of stretching out.

That also applies to Fall Highweight third Chateau, who took an incredible 16 races to lose his maiden tag but has since made up for lost time, although none of his eight wins have come beyond six and a half furlongs. He came home three and three-quarter lengths behind Hopeful Treasure, but is 3lb better in today and confirmed both his wellbeing and the form of that contest when going gate-to-wire in a short-field stakes here last month. Fall Highweight fifth War Tocsin was more than six lengths behind Chateau and is zero-for-seven – never even hitting the board – in stakes company, and looks out of his depth again.

It has been a long time since Drafted showed he had the chops to win a race like this, his last victory coming in March 2019 in a Group 3 at Meydan. He has lost ten straight since then, ran fourth in this race 12 months ago, and when he was third behind Chateau, beaten four and a quarter lengths, in that aforementioned short-field stakes here he never shaped as a threat.

Repo Rocks was runner-up on his stakes debut at Parx Racing last time out and needs more here, although he won twice at the Big A at the end of 2021 and his affinity for the track counts in his favour. State-bred-stakes winner Penguin Power has never run anywhere other than Charles Town and Laurel Park in his 23-race career, and is more likely to stay at Laurel for a stakes race on Saturday.

Betting Prediction for Toboggan is HOPEFUL TREASURE to show after his Grade 3 score here last time.