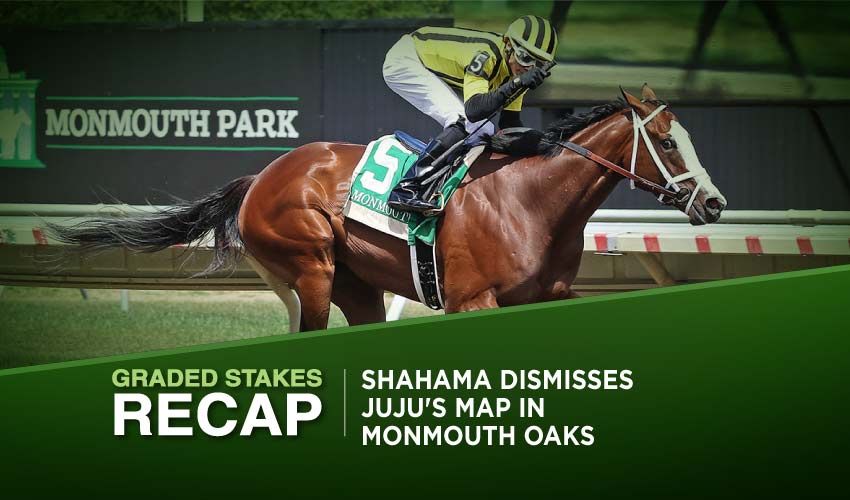 On Sunday, five three-year-old fillies clashed in the G3 Monmouth Oaks, where Juju’s Map was expected to benefit from a drop in the class (and hopefully get a ride that should suit her lack of finish). However, Shahama was once again better and scored the race easily under Jorge Vargas. Juju’s Map came home in third, defeated also by Shotgun Hottie.

After Silverleaf scratched, only five three-year-old fillies lined up in this G3 dirt event. Vying for the purse of $250,000, Juju’s Map (9-10) maintained the role as the favorite until the start of the race, where the field was about to cover the distance of a mile and half furlongs.

The mentioned Brad Cox bound bay didn’t have the quickest start; still, she was eager to get to the top where she set the pace, yet weakened in the final stretch, allowing Shahama (17-10) to take over. The Todd Pletcher trained white-faced filly then cruised home unchallenged, crossing the wire in 1m 41.54s.

In the last strides, Jorge Vargas just let his mount gallop past the post, so second Shotgun Hottie (4-1) closed on sightly and came home in second by two and ½ of a length, with Juju’s Map grabbing third.

The victorious daughter of Munnings commenced her career in Dubai, where she was unbeaten in four starts, bagging both the Listed 1000 Guineas and G3 Dubai Oaks, yet the competition in the US was considerably fiercer.

Still, finishing sixth in the Kentucky Oaks looked fine, which applies to Shahama’s quite promising second place in the G2 Mother Goose Stakes. Back then, she also bettered Juju’s Map, who was expected to make amends for her previous performance, yet nothing of the sort happened on Sunday.

Juju’s Map basically delivered the same effort as in the Mother Goose Stakes – set the pace and weakened in the final turn. Therefore, she had to settle for third place again, while Shahama unfolded her finish to bag her second G3 triumph. Moreover, she affirmed to be another smart runner generated by the horse racing programme in UAE as she looks capable of playing important role at the US tracks.

Shotgun Hottie drew on her run in the Delaware Oaks and showed off a fine turn of foot to grab second place, while the rest of the field was no match not only for the victress but also for second and third fillies to cross the wire. Runaway Wife (81-10) didn’t affirm anything she suggested in her previous outings and took distant fourth place, with Office Etiquette (39-1) being outclassed and finishing fifth.

Follow us on Social Media for more Shahama updates!