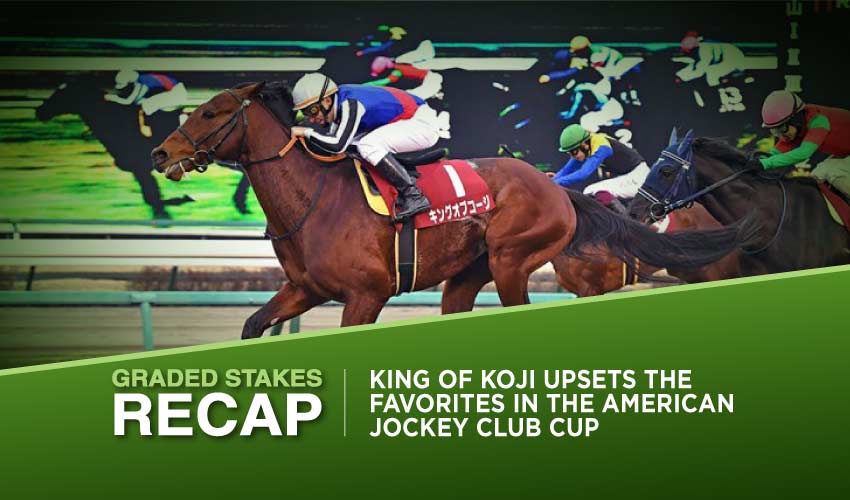 The favorites failed to fulfil their roles in both Graded races in Japan on Sunday. The card at Nakayama featured the G2 American Jockey Club Cup; however, Orthoclase didn’t live up to the expectations here as King of Koji remembered his best days, bettering every single of his rivals to bag the second G2 victory of his career. Suave Aramis then surprised preferred Auvergne in Tokai Stakes at the Chukyo Racecourse, preventing him from striking gold here for the second consecutive year.

In the field of 14 four-year-old and older horses, second in the Japanese St Leger (Kikuka Sho), Orthoclase (2-1), was the leading chance in the G2 turf race with the purse of 119,900,000 Yen; however, he weakened considerably in the final stretch and finished only sixth. Overall, the mile and 3 furlongs-long race didn’t favor the preferred horses much this time, except for King of Koji (69-1), who looked like a third chance in Nakayama. His most recent results weren’t spectacular, but he bagged a G2 victory in the past, so he was in the mix.

Under Norihiro Yokoyama, the six-year-old horse trained by Shogo Yasuda spent the race at the rear of the field, trailing behind the main pack, but the pace proved to be too fast for the front anyway. King of Koji managed quite easily to move forward in the second half of the race, and when turning for the final stretch, he had enough space to rally. Although he was far away from the lead, his turn-of-foot was at least eye-catching, and as he kept passing by his rivals, there wasn’t anybody stopping him from scoring the American Jockey Club Cup in the end. The son of Lord Kanaloa crossed the wire in 2m 12.70s and still going strong, he left second Meiner Fanrong (88-1), a massive outsider of the race, behind by one and a half of a length. Boccherini (95-10) was third.

The pinnacle of Sunday’s card at the Chukyo Racecourse saw 16 four-year-old and older horses compete at the distance of a mile on the dirt surface. Six-year-old Auvergne (12-5) looked the clear favourite for the G2 race as he bagged the race in 2021 and was expected to repeat the victory in this 106,420,000 Yen feat. Taisei Danno aboard Auvergne prepared his mount quite a fine trip, and as the field turned for home, he pointed him into a gap between a rival and the fence. Upon that, the favorite charged for the lead yet had to settle for the second place after a powerful move from underestimated Suave Aramis (147-10) on the outside. Running in the midfield, Daisaku Matsuda had to be patient in the final stretch until a spot opened for the seven-year-old, and when it did, he sent the bay forward. Almost flying, Suave Aramis passed by all of his rivals in time to score in 1m 51.70s, beating Auvergne by a half of a length. Bullbear Iride (26-5) was third.

Follow us on Social Media for American Jockey Club updates!