Tokyo & Hanshin races for this weekend 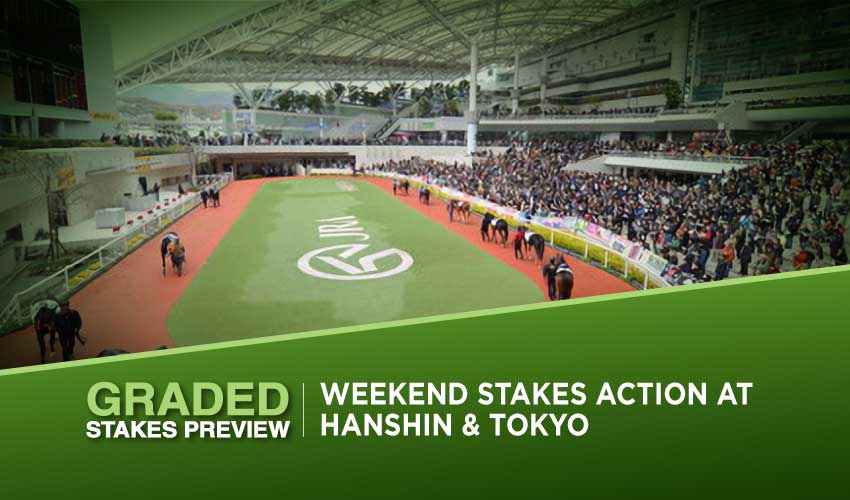 The upcoming weekend features several Grade races, including those held at the Japanese tracks in Tokyo and Hanshin. On Saturday, the former brings the G3 Musashino Stakes, in other words, the G1 Champions Cup trial that attracted a considerably competitive field, which could also be said about Hanshin’s The Daily Hai Nisai Stakes run on the same day.

We’re about to see which of two-year-olds participants will strike their first G2 win, while it could be the unbeaten Serifos or a couple of promising youngsters led by local jockey legends Christophe Lemaire (Sonnet Phrase) and Yutaka Take (Dogma). On Sunday, the G1 Queen Elizabeth II Cup will take place at Hanshin, with Classic winner Akatorino Musume striving to bag another G1 win. However, the highly prestigious event isn’t only about her as Win Marilyn seems classy enough to pose a real threat, and Des Ailes could recover from her last poor outing to run a banger here

The G3 event is held at the dirt surface and with its distance of a mile; it serves as a trial for the G1 Champions Cup, scheduled for early December. The 72,000,000 Yen race is open to three-year-old and older horses, among which we also find eight-year-old Wonder Lider () trained by Shogo Yasuda, who triumphed here two years ago and finished fourth in 2020. He seems to thrive at Tokyo racecourse in particular, given he scored his only Grade victory at Tokyo; moreover, he placed third here in the G1 February Stakes this year. As a seven-year-old, he was in fine form; however, his debut for the new season ended up in the eighth place in a Listed race when carrying the biggest weight.

Despite the underwhelming performance, the veteran shouldn’t be discarded as the previous start could’ve boosted him enough to play an impactful role in Saturday’s race. Air Spinel () is another veteran who placed in the Musashino Stakes and February Stakes, and as his seasonal debut was decent, finishing second in a Listed, he’s in the mix, too.Seven-year-old Daiwa Cagney () entered the season in an alright fashion as he took fourth in the G2 Mainichi Okan at Tokyo. Still, he’s the kind of a horse one shouldn’t rely on repeating good efforts in next starts as his results resemble a rollercoaster ride. He has a chance, alright, but for example, three-year-old Smasher () looks more interesting in terms of benefiting from the first season appearance.

Tatsuya Yoshioka’s charge most notably scored the G3 Unicorn Stakes in June, upon which he suggested that a mile distance is precisely for him as he disappointed in a local Japanese Dirt Derby at the distance of a mile and a quarter. When he met Wonder Lider last time out, he bettered him as he finished seventh. When carrying more or less the same weight as his rivals, Smasher could achieve another G3 victory here.

Whereas some of the mentioned horses failed to impress on their first seasonal outings, T M South Dan () succeeded in a Listed race, Soliste Thunder () finished third at the same scene as he is about to attempt repeating the second place from last year’s Musashino Stakes, while Bullbear Iride () took third in the G3 Sirius Stakes. Tagano Beauty () could also be one to consider as his results at Tokyo has been great, in smaller races, though, and the last to mention is Omega Rainbows () because of his fine effort in the G3 Elm Stakes in August.

He finished second, and overall, the five-year-old horse seems to be a decent runner, but he didn’t fire in this race in 2020, into which he probably went in even better form.  Our pick for the Musashino Stakes is Air Spinel as the results from previous outings in the race and the February Stakes had proved crucial for the winners of Saturday’s event. Moreover, his seasonal reappearance was quite good given his age

While the first discussed race is run at the Tokyo Racecourse, this G2 event open to two-year-old colts and fillies is held at the Hanshin Track with the purse of 72,000,000 Yen. A field of seven juniors will cover the distance of a mile at the turf surface, while Serifos () is the only participant with a Grade victory under his belt. The Mitsumasa Nakauchida trained colt has hit the track twice, and after a successful debut, he remained unbeaten also in the G3 Niigata Nisai Stakes over a mile. He spent most of the race in the midpack, but once the jockey pointed him to the free space at the fence, the big colt rallied forward until he seized the lead and won quite easily.

There’s some raw talent about him, but it’s a question of whether some of his rivals wouldn’t be more mature to actually better him on Saturday, for example, the winner of the Aster Sho Purpur Ray () trained by Naosuke Sugai. He came only second in his debut but then scored two victories in a row. In the G3 Niigata Nisai Stakes, Stunning Rose () finished fifth, upon which she displayed a late turn of foot to get third place in the G3 Saudi Arabia Royal Cup ahead of Unaginobori (). It was just the second start for the latter, which suggests he could hugely benefit from the experience and improve somewhat for Saturday’s outing. Sonnet Phrase () has run once to immediate success, while Dogma () also scored his first start and then went on to take fourth place in the Fuyo Stakes. According to the races he was pointed to, it seems his connections count on him for longer distances, though.

Our betting pick for The Daily Hai Nisai Stakes is Serifos, for whom Saturday’s race is just a logical step up in terms of categories, and he could draw on his G3 win here.

This year’s edition of the G1 turf race over a mile and three furlongs lacks any three-year-old or older fillies and mares champions like Snow Fairy, Lucky Lilac, or Lys Gracieux; still, the quality of the field is undeniably intact. In fact, the purse of 199,500,000 Yen attracted three-year-old filly Akaitorino Musume () trained by Sakae Kunieda, who has been a fantastic performer for her connections. The daughter of Deep Impact won two races as a junior, and in 2021, she scored a G3 race, finished fourth in the 1000 Guineas, second in the Japanese Oaks, and crowned her Classic endeavours with a fine victory in the Shuka Sho over a mile and a quarter. She definitely belongs among the best three-year-old fillies and is expected to run well on Sunday again.

Regarding four-year-old contestants, Win Marilyn ()finished second in the Japanese Oaks last year, upon which she managed to grab fourth in the Queen Elizabeth II Cup. The Takahisa Tezuka bound chestnut finished fifth in the G1 Tenno Sho and scored two G2 races in 2021, including the Sankei Sho All Comers at the distance of a mile and three furlongs. It wasn’t an easy race for her as she had no space to go in the final stretch, but in the end, her jockey managed to push her through the rivals, and therefore, Win Marilyn was able to unfold her finish.

Second Win Kiitos () ran well, but her speed couldn’t match the one of the winner’s, while the favourite, four-year-old Lei Papale () burnt all of her energy too early, weakened in the final stage, and had to settle for the fourth place. However, she needs to be respected once again, given she won the G1 Osaka Hai and came third in the G1 Tarazuka Kinen among the absolute elite, including Chrono Genesis.

Five-year-old Rambling Alley () failed to impress in the Sankei Sho All Comers when crossing the wire in seventh, while Des Ailes () was unlucky in another trial, the G3 Ireland Trophy Fuchu Himba Stakes over a mile and a furlong. They could improve for Sunday run, of course, but the Classic winner seems tough to beat here. Four-year-old Terzetto () is also one to consider despite the fact she’s just a G3 scored because she’s closely related to the fresh US G1 winner, Loves Only You.

Our betting pick for the Queen Elizabeth II Cup at Hanshin is Akatorino Musume, who is a consistent performer in excellent form, and she could add up another G1 victory to her resume.

Sign up and get a 10% rebate. Make sure to stay tuned for the latest racing odds, and Horse racing entries.

Follow us on Social Media for instant Tokyo & Hanshin updates!