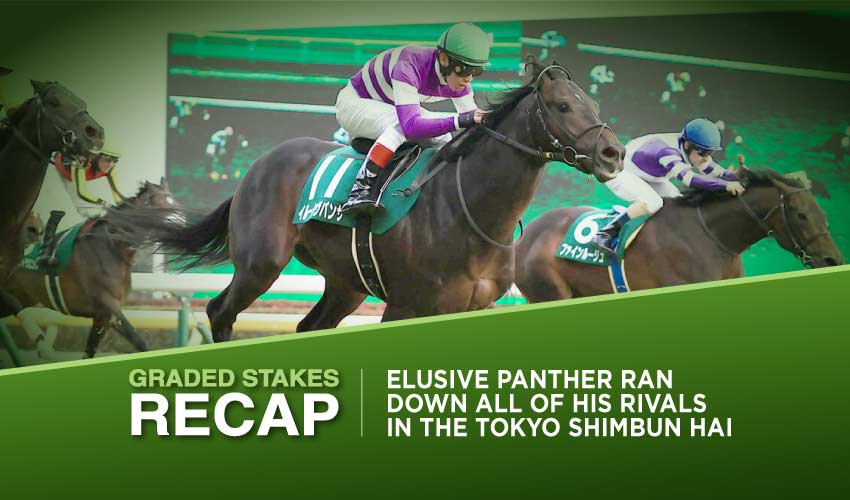 Both weekend’s Graded race in Japan know their winners as in Chukyo and Tokyo, offspring of Heart’s Cry scored their respective G3 victories. At first, three-year-old Matenro Leo denied Dante’s View in the Kisaragi Sho, upon which four-year-old Elusive Panther showed off his potential in the Tokyo Shimbun Hai, bettering preferred Fine Rouge.

The G3 turf race open to three-year-old colts and fillies was held at a mile and a quarter, while Matenro Leo (3-1) confirmed his ability suggested in the G1 Hopeful Stakes. At his only second outing, he finished fifth back then and on Sunday, he heartily fought to score his premiere Graded victory. The purse of 76,570,000 Yen attracted a field of 11 participants, while the Mitsugu Kon bound colt galloped at the rear of the field.

Jockey Norihiro Yokoyama took him outside in the final turn, so the son of Heart’s Cry had enough spacy to unfold his finish, thanks to which he easily passed by all of his rivals with one exception – Dante’s View (31-10).

After placing fourth in the G2, Dante’s View poised as another victory contender here, joining Matenro Leo at the front to battle for the win; however, he lost by a nose. Matenro Leo prevailed in 2m 0.50s, and we’re curious about his future starts as he looks quite talented, which also applies to the second Dante’s View. Meisho Gekirin (269-10) delivered a front-running performance but weakened in the closing stages.

In the end, he kept third place just by a neck to flying Ask Wild More (11-1), running in fourth. Strong Will (12-5) started off as a favourite here but was no match for the mentioned contenders and had to settle for fifth.

The second G3 race of the weekend in Japan was meant for four-year-old and older horses who competed at the distance of a mile. On the turf surface, four-year-old filly Fine Rouge (23-10) looked primed to snatch most of the purse of 78,120,000 Yen; however, running in the midfield, she bumped into traffic difficulties in the final stretch, preventing her from rallying forward in time.

Once she finally thronged through her rivals and Christophe Lemaire aboard urged her to seize the front, it was already too late as Elusive Panther (43-10) was basically uncatchable for her.

The four-year-old colt trained by Takashi Kubota spent the race at the rear of the field, Hironobu Tanabe encouraged him to squeeze between rivals at the beginning of the final stretch, and thus, his mount could close on the front smoothly.

Elusive Panther ran down all of his rivals from the outside, and even though Fine Rouge tried to threaten him in the end, the son of Heart’s Cry had everything under control and struck gold by one and ¾ of a length in 1m 32.30s. Fine Rouge finished second with a neck advantage over third Karate (31-10), attempting to win the Tokyo Shimbun Hai for the second time. He failed at that task; still, he delivered a respectable effort.

Follow us on Social Media for Tokyo Shimbun Hai updates!