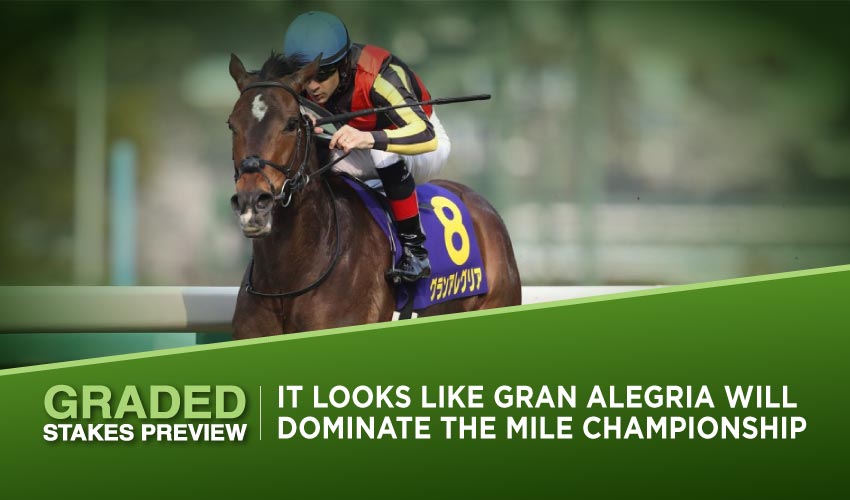 The upcoming weekend brings two exciting races held in Japan, into which we look in this article. On Saturday, the Tokyo Racecourse will see some two-year-old talents covering the distance of a mile and a furlong in The Tokyo Sports Hai Nisai Stakes, while the G1 Mile Championship is the pinnacle of Sunday’s card at the Hanshin Racecourse.

Once again, this track holds it instead of Kyoto Racecourse, and it attracted some outstanding performers, including star mare Gran Alegria who will attempt to win the mile-long race for the second time in a row. She’ll again face the winner of the 2019 edition Indy Champ and some interesting three-year-olds, including sons of hot European sires, Frankel and Kingman.

12 two-year-old colts will meet in this G2 event held at a mile and a furlong distance, with 72,620,000 Yen being up for grabs. The turf race was previously won by such a star as Contrail, who went on to this contest after having just one outing under his belts, which is the case for most of Saturday’s participants, too. Therefore, each of them might be able to benefit from their debuts and step up their game successfully; however, when it comes to Japanese races, it’s always good to focus on mounts ridden by Christophe Lemaire.

This time, he will pilot Tetsuya Kimura bound Equinox, who recorded his only start in August when scoring easily by 6 lengths at Niigata, and because he handled both the experience and the trip of a mile and a furlong smoothly, he is expected to fight for the win also in this G2 contest. Regarding other participants who ran just once but seemed talented enough to play a role here, Red Belle Ame and Al Naseem should be considered, given their performances were promising; moreover, they’ll have Yuichi Fukunaga and Yutaka Take, respectively, aboard.

While the mentioned trio has only one victorious outing behind them, for example, Gran Cielo, trained by Ryo Takei, is more skilled as he’s run three times already. After bagging his first win at the second attempt, he was pointed into the Listed Ivy Stakes held at Saturday’s distance, where he managed a close second place, suggesting he was in fine form back in October. On the same day, Tendence won his maiden at the second trying, and together with Asahi and Dante’s View, he could be interesting in this race if he progressed enough since then.

Our betting pick for The Tokyo Sports Hai Nisai Stakes:

Equinox, as his debut performance was auspicious. He might lack some experience in comparison to Gran Cielo, though.

One of the absolutely most prestigious Japanese races is about to be held on Sunday at the Hanshin Racecourse with the purse of 252,920,000 Yen that attracted a field of 16 three-year-old and older horses. The participants will clash at the distance of a mile on the turf surface, while this time, the race might see a mouth-watering fight between two past winners, six-year-old Indy Champ and five-year-old Gran Alegria again.

The latter is a mare trained by Kazuo Fujisawa, and she’s been an excellent performer since 2018; however, she gained her respect, especially thanks to her victories in the 1000 Guineas, second place in the Tanakatsunomiya Kinen, and a G1 hattrick she recorded in 2020. Back then, Gran Alegria was just superb in the Yasuda Kinen, Sprinters Stakes, and Mile Championship, confirming not only to be a superstar mare but only capable of delivering high-class effort over distances from 6 furlongs to a mile. Still, it can’t be said she doesn’t handle anything longer as Gran Alegria finished third in the Tenno Sho over a mile and a quarter last time out, yet her latest G1 victory came at the mile in the Victoria Mile in May.

This trip suits her best, and nobody will be surprised if Gran Alegria becomes the back to back winner of the Mile Championship, where she bettered Indy Champ in 2020, the winner of the race from 2019. Although the bay horse trained by Hidetaka Otonashi deserves some respect, he was just quite outclassed by Gran Alegria last year; moreover, his results in the 2021 season suggest he won’t catch the favourite once more. Of course, he earned some money for the connections when running third in the G1 Tanakatsunomiya Kinen and fourth in the Yasuda Kinen; still, it looks like that the younger rivals might prove to be too tough a competition for him at this point.

When talking about younger participants, the most interesting one regarding three-year-olds should be Schnell Meister, a Takahisa Tezuka bound son of Kingman. He ran a great race to grab third in the Yasuda Kinen thanks to his late finish, and he also recorded his first G1 race in 2021 when scoring the NHK Mile Cup over preferred Grenadier Guards; moreover, he managed to win the G2 Mainichi Okan thanks to his powerful turn-of-foot. Still, it seems that given the tactics he employs, he might fall short on Sunday as he finishes really at the last possible moment.

Grenadier Guards is the winner of last year’s G1 Futurity Stakes, and because he’s always trying in the final stage, he’s in the mix together with Danon the Kid, winner of the G1 Hopeful Stakes. Besides the rather skilled contestants and their younger counterparts, four-year-old Salios should be considered as well, even though he hasn’t impressed in his most recent starts. Still, he’s the last year’s 2000 Guineas and Japanese Derby runner-up and hasn’t hit the track since June. He might’ve just needed some rest after a demanding campaign, and when being rested properly, Salios could definitely be a place contender.

Our betting pick for the Mile Championship is:

Gran Alegria, thanks to her undeniable class and quite diligent nature as she has been numerous times caught up in some trouble even in the final stretch, and she’s always managed to put herself through it.