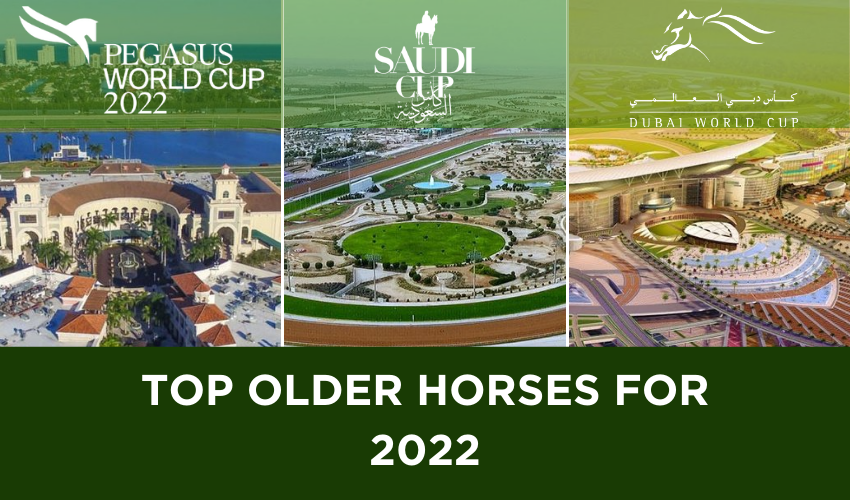 Looking at the top horses in the Pegasus, Dubai World Cup and Saudi.

The beginning of the racing year is now characterized by three valuable international races, at the end of January, February and March, which give the older horses a period in the spotlight before the big three-year-old races move centre stage in the spring. Here we look at the potential contenders among the Top older horses for 2022 brigade.

Big clash in the Pegasus

The first jewel in this international ‘triple crown’ is the Grade 1 Pegasus World Cup ($3m, Gulfstream Park, Jan 29), a nine-furlong showdown that is expected to feature a mouthwatering clash between two brilliant Breeders’ Cup winners.

Breeders’ Cup Classic winner and likely Horse of the Year Knicks Go will make his last appearance before being retired to stud, facing off against gate-to-wire Breeders’ Cup Dirt Mile winner Life Is Good, who blew that race apart with a sensational display of front-running. Thus there will be more to the Pegasus than a clash of star quality; there will also be a tactical duel between two confirmed pace-setters.

The Todd Pletcher-trained Life Is Good has the greater natural speed – he was runner-up in the seven-furlong Grade 1 Allen Jerkens Memorial at Saratoga – but Knicks Go is the reigning Pegasus champion with experience over course and distance.

Behind the big two – whose presence may well deter several potential contenders – the challengers may include Life Is Good’s barnmates Fearless, who is four-for-five at the Miami circuit after winning the Grade 3 Harlan’s Holiday by four lengths last time out, Happy Saver, five-for-eight lifetime and runner-up in the Grade 1 Clark at Churchill Downs behind the now-retired Maxfield, and Dr Post, who is unbeaten in two at Gulfstream and ran third in the Grade 1 Woodward at Belmont Park two starts ago.

Pletcher has a very strong hand of older horses for 2022, and another is Americanrevolution, five-for-seven lifetime and winner of the Grade 1 Cigar Mile at Aqueduct on his most recent outing, when he finished half a length ahead of yet another Pletcher horse for 2022 in Following Sea, earlier third in the Breeders’ Cup Sprint. Americanrevolution is a highly unlikely candidate for the Pegasus, as he is expected to have a break during the early part of the year before being aimed at a summer campaign.

Duel in the desert I

The four-week gap between the Pegasus and the $20 million Group 1 Saudi Cup (Riyadh, Feb 26), the most valuable race in the world, allows horses to take in both races, although naturally plans will change in light of the outcome at Gulfstream Park.

All of Pletcher’s Pegasus World Cup possibles are also Saudi Cup possibles, especially Life Is Good, but no decisions on his international runners will be made until much nearer the date. One horse who has been prepared specifically for the Saudi Cup is the Brad Cox-trained Mandaloun, who has been off the track since losing the Grade 1 Haskell at Monmouth Park in mid-July by a nose, and then getting the race in the stewards’ room on the disqualification of Hot Rod Charlie.

Mandaloun, whose runner-up spot in the Kentucky Derby may yet be upgraded to first place depending on the outcome of the Medina Spirit/Bob Baffert saga, is owned by the Saudi-based Juddmonte empire and is expected to have one run at home before shipping east for the nine-furlong contest.

He will be joined on the flight by the durable Midnight Bourbon, who was one of the busiest top-grade three-year-olds this year with nine runs to his name, although just one win in the Grade 3 Lecomte at Fair Grounds in January. He was second in the Preakness and the Travers before closing his campaign with third spot in the Clark, three lengths behind the aforementioned Happy Saver. Like Mandaloun, he will have one start at home before travelling for the Saudi Cup.

The colossal purse for the Saudi Cup will attract a global field, with European horses well represented. Foremost among these will be reigning champion Mishriff, who scooped the pot by a length before the race’s status was elevated to Group 1 class later in the year.

Mishriff, trained in Newmarket by John Gosden, was a brilliant six-length winner of the Group 1 Juddmonte International at York in August before disappointing in the Group 1 Champion at Ascot, finishing fourth behind Sealiway, who is expected to reoppose in the Saudi Cup.

That French colt, trained by Cedric Rossi, had previously chased home St Mark’s Basilica in the Group 1 Prix du Jockey-Club at Chantilly and finished fifth in the Prix de l’Arc de Triomphe. If he goes to Riyadh, it will be his first try on a dirt surface. Another European contender for the meeting is Group 1 Hong Kong Vase runner-up Pyledriver, who could drop back in distance for the $1.5 million Neom Turf Cup.

Duel in the desert II

The $12 million Group 1 Dubai World Cup (Meydan, Mar 26) over ten furlongs is obviously a target for many of the horses mentioned above, but with three months between now and then there is no point being too dogmatic about the potential line-up.

Preakness winner Rombauer, who has been absent since finishing third in the Belmont in June, is a possible for the Dubai World Cup according to trainer Michael McCarthy, while the hard-knocking Hot Rod Charlie is a likely traveller.

‘Chuck’ hit the board in the Kentucky Derby and the Belmont and ‘won’ the Grade 1 Haskell at Monmouth Park before having his number taken down for interference. The Doug O’Neill-trained Grade 1 Pennsylvania Derby winner brought his three-year-old campaign to a close when beaten a nose in the Grade 2 San Antonio at Santa Anita this week, and a prep race before shipping to Meydan is as yet unconfirmed.

Newmarket trainer Charlie Appleby, who won three races at the Breeders’ Cup, will no doubt have several runners at the World Cup meeting, with Epsom Derby winner Adayar, Irish Derby winner Hurricane Lane and Breeders’ Cup Turf winner Yibir all staying in training and very much in the mix.

None of the three are obvious contenders for the World Cup itself, but the fast-improving Real World, based across town with Godolphin’s other trainer Saeed Bin Suroor, could be a candidate after winning his last four starts of 2021, closing out with the Group 2 Daniel Wildenstein at Longchamp in October.

There are several big-name older horses staying in training next year who will not be in contention for the ‘triple crown’ at Gulfstream, Riyadh and Meydan. Most obvious among them is the potential all-timer Flightline, cantering winner of the Grade 1 Malibu this week, who has the Grade 1 Metropolitan Handicap at Belmont Park in June as his next target.

Three top-class females return in 2022, with multiple Grade 1 winner Letruska top of the list ahead of likely three-year-old champion filly Malathaat and Grade 1 winner Clairiere, who ran third and fourth in the Breeders’ Cup Distaff at Del Mar.

This year’s top US-trained money-earner Mystic Guide, winner of the Dubai World Cup and never off the board in nine starts but off the track since early July, also stays in training with targets international and domestic on the slate for Top older horses for 2022

Follow us on Social Media for instant Top older horses for 2022 updates!