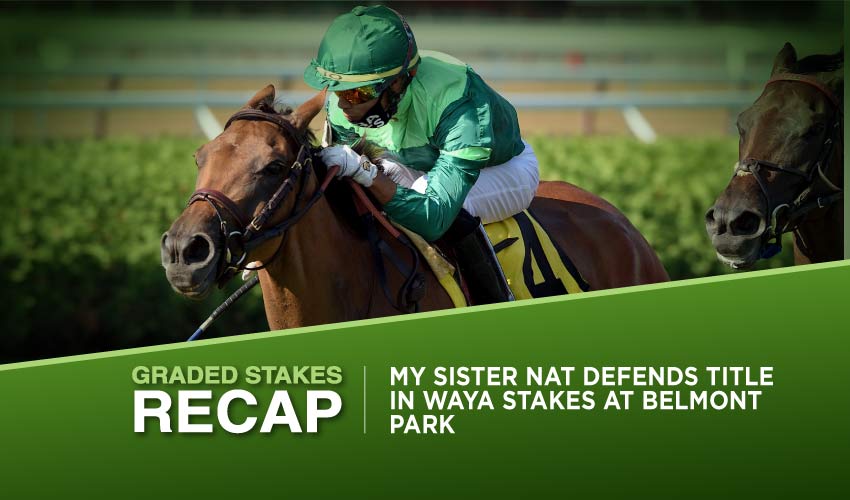 In case you miss it, don’t worry we got you cover with the top races at Belmont Park. Echo Zulu lit up the New York skyline with a barnstorming display in the Grade 1 Frizette at Belmont Park on Sunday, stamping herself the best juvenile filly in the country and setting her up for the Breeders’ Cup in a month’s time. Annapolis, dogged winner of the Grade 2 Pilgrim, and the supremely consistent My Sister Nat, who defended her Grade 3 Waya title, will likely be heading west for the BC Filly & Mare Turf.

It’s so EZ for Echo Zulu

In a thoroughly dominant performance that extended her unbeaten run to three, Echo Zulu served notice that she will be the two-year-old filly to beat at the Breeders’ Cup when romping in the feature Grade 1 Frizette at Belmont Park on Sunday.

The daughter of freshman sire sensation Gun Runner was an overwhelming 1-5 favorite after winning the Grade 1 Spinaway at Saratoga last month and never gave her supporters a moment’s concern, leading from the gate and setting brisk fractions.

When Gerrymander drew alongside to challenge at the quarter pole, Echo Zulu slipped quickly and easily into overdrive and cleared right away to the wire, stopping the clock in 1:35 and change as she demolished the field, being eased down close home to win by seven and a quarter lengths. Gerrymander kept on to be runner-up, three lengths ahead of A Mo Reay, who came on late for the minor placing.

“It felt like I was walking, how she was doing it,” said jockey Ricardo Santana. “She was really impressive for a two-year-old. She broke good and was waiting for the company. When the company got to her, she took off again. I had a lot of horse. I never needed to ask her, that’s how much horse I had. She’s special.”

Hall of Fame trainer Steve Asmussen was winning his fourth Frizette, and Echo Zulu’s dominance brought to mind his first with My Miss Aurelia in 2011, who went on to win at the Breeders’ Cup and rank as a champion two-year-old filly. Echo Zulu is on the same path, with this ‘win-and-in’ earning her a free pass to the Grade 1 Juvenile Fillies at Del Mar on November 5, a race for which the Frizette has long been an excellent guide. She is already as short as 3-2 (+150) for the Juvenile Fillies on the Jazzsportsbook.

“The filly obviously has a tremendous amount of ability, now it’s just up to how fast everybody else is,” said Asmussen. “We’re very fortunate to have an obviously special horse.”

There were only four runners in the Grade 2 Pilgrim, the highlight of the Belmont Park undercard, but it served notice that you don’t need a big field to get the crowd on their feet as Annapolis and Portfolio Company fought out a thrilling stretch duel.

When the camera clicked Annapolis was ahead in front of his gallant rival, stopping the clock in a tick over 1:14 and paying $3.30 at the windows. Limited Liability was five lengths further back in third.

“He fought the whole way to the wire,” said winning jockey Irad Ortiz. “The way he did it last time he looked like a nice horse, so we expected him to move forward and he did.”

The well-bred son of War Front is trained by Todd Pletcher, for whom he was a fourth Pilgrim winner, and came to Belmont off an easy debut victory in a Saratoga maiden. The merit of this success puts Annapolis right in the picture for the Grade 1 Breeders’ Cup Juvenile Turf at Del Mar on November 5; the Pilgrim winner has followed up in that race in three of the last five years.

He will likely be joined in southern California by Portfolio Company, whose rider Joel Rosario said: “I had to move forward a little earlier than I wanted, and maybe that cost me a little.”

Twelve months ago My Sister Nat snapped a long losing streak when winning the Waya, and this time around she did exactly the same, ending a seven-race barren spell with a comfortable success in the Grade 3 Waya at Belmont Park.

Last year the Waya was run at Saratoga over a slightly longer trip, but the impressively consistent My Sister Nat ($3.00), a half-sister to US turf champion Sistercharlie and to 2020 Prix de l’Arc de Triomphe winner Sottsass, demonstrated that location and distance didn’t matter, just ability.

The six-year-old mare sat well off the leisurely fractions set by Always Shopping until making her move at the top of the turn, and her sustained challenge took her quickly to the lead, whereupon she drew off down the lane to win by two and a half lengths. Her stablemate Orglandes, last for much of the race, kept on late to take the runner-up spot by a neck from Always Shopping. The clock showed 2:15 and two-fifths.

“I put her in the clear and she gave me such a great feeling. She just was handling the course really well,” said rider Jose Ortiz. “She gave me a great kick from the three-eighths pole to the wire, and she kept running.”

My Sister Nat, a Group 3 winner in her native France before moving Stateside, has been placed in seven Graded stakes during her career, notably two editions of the Grade 1 Flower Bowl, although her only Graded victories have come in the Waya Stakes. Her next outing is likely to be in the Grade 1 Breeders’ Cup Filly & Mare Turf, a race won by her half-sister three years ago, at Del Mar on November 6.

Follow us on Social Media for instant Top Races at Belmont Park updates!