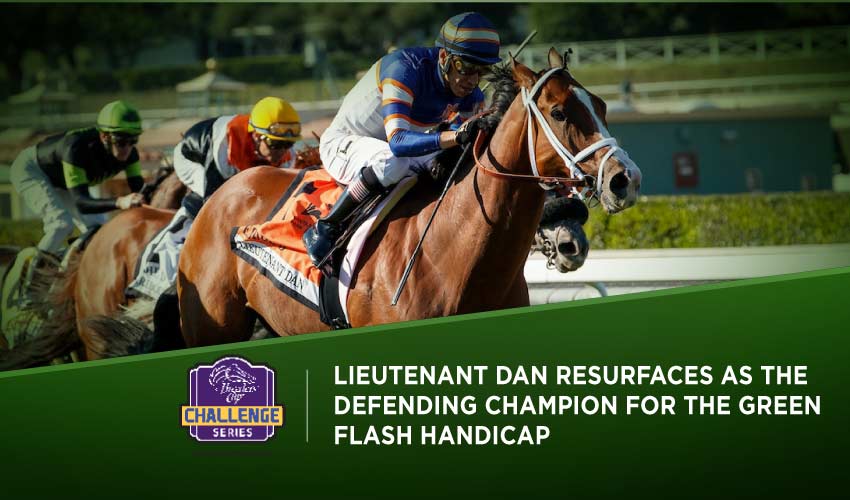 The racing action at Del Mar doesn’t stop this weekend and there are two fantastic races headlining the Sunday card – the Green Flash Handicap and Torrey Pines. Here is everything you need to know.

At the time of writing eleven horses are due to compete for this year’s Green Flash Handicap. A Grade 3 contest, the winner of this race will receive an entry into this year’s Breeders’ Cup Turf Sprint, so there is plenty on the line.

The current favourite for the race and easily the most intriguing horse is Lieutenant Dan who represents the Steven Miyadi yard and is making his first appearance in ten months.

When we last saw Lieutenant Dan he was finishing second in the 2021 Breeders’ Cup Turf Sprint finishing behind arguably the fastest horse in the world, Golden Pal.

That form is clearly rock solid and if he turns up to Del Mar on Sunday fit and ready he could be the one to catch.

With a question mark over Lieutenant Dan’s fitness, there are several other horses to keep an eye on.

Dubai Key is an interesting runner. A Group winner in his native Chile, he has also tasted success when he has raced in America, which includes a win last time out at Del Mar. His win that day was gutsy and it came from the front. He could be one of the pace angles of the race.

Another horse who is looking to convert solid South American racing form is Super Ocho. Like his rival Dubai Key, Super Ocho has tasted success in graded races in Chile. He has had one race in the States and this came at Mountaineer Park. He routed the field that day and although this is a whole lot tougher, he could be a player at a larger price.

Whatmakessammyrun will be having only his second run for trainer James Bentley Begg and is looking to land a graded success for the first time. A horse that has been highly tried, he hasn’t been disgraced at the very highest level and looks to have a decent outside chance.

We last saw Maven at Royal Ascot but his performance in the Kings Stand didn’t go to plan. He could only finish 11th that day but is looking to bounce back now back in the US. Trained by Wesley Ward you know that Maven is going to be absolute lightning out of the gate. He is the most likely pace of the angle of the race.

Barristan The Bold will be having just his second run for trainer Mark Glatt having moved Stateside. Formerly trained by Tom Dascombe, Barristan The Bold has competed well in several high profile British races. It has been over three years since he last won but he could run a big race here.

In a wide open and slightly puzzling affair, the class horse of this race looks to be Lieutenant Dan. Although he arrives potentially needing the run, he has won when coming off a lengthy absence before and he could repeat the feat here.

One of the highest profile races left to be run at Del Mar this season is the Torrey Pines Stakes and at the time of writing seven horses have been declared for this year’s renewal.

The top of the market looks to be competitive with several horses vying for favouritism.

Likely to head the betting is Desert Dawn. Trained out of the excellent Phil D’Amato barn, Desert Dawn heads into this race off the back of a career best performance in the Grade 1 Clement Hirsch Stakes where she would only just be denied. A classy operator, she should find this return to calmer waters a whole lot easier.

Under The Stars is having just her second run for trainer Sean McCarthy. Racing under the world famous Coolmoore silks, much is expected of this talented fillie. A winner of two Grade 2 races in her career, she is another who should have a major say in proceedings.

When talking of contenders Midnight Memories has to be in the conversation. Trained by Bob Baffert, Midnight Memories has only had three starts but she has won two of these with a minimum amount of fuss. She is taking a big step up in class here but could easily be the least exposed horse of the race.

Grace Adler is another who is trained by Bob Baffert and this talented three year old is looking to prove her class once again. A convincing winner of the Grade 1 Debutante Stakes last year, she has been lightly campaigned ever since and has just had the one run this season. Bigger races are on the horizon for this classy fillie but she will want to return to winning ways here.

Of the outsiders there are a couple to keep an eye on. Cinnamon Cat will represent Mike McCarthy and is looking to build upon his first ever win last time out. That win came at Santa Anita and was only in maiden company. Whilst the form isn’t much, the manner of her victory was impressive and she could run a big race.

Another big priced horse is Kirstenbosch. She has a mixed profile but has performed well in the past, placing in Grade 2 company before struggling at a much lower level. A win looks unlikely, but expect her to be in with a chance as the runners approach the final turn.

with time running out on the season at Del Mar, this is an incredibly competitive betting heat. If Grace Adler can get it right she will be a huge danger to all, but we will side with Desert Dawn. Her run last time out in Grade 1 company was hugely promising and she looks like the one to beat here.