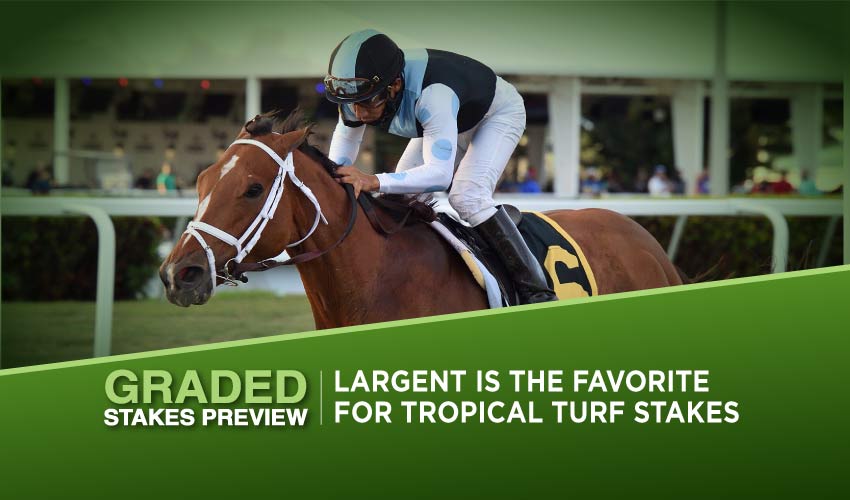 Saturday’s horse racing in the USA brings, the G3 Tropical Turf Stakes at the Gulfstream Park, where six-year-old Largent will make a reappearance after a long hiatus. He hasn’t been seen on the track since January 2021, when he finished second in the G1 Pegasus World Cup Turf behind Colonel Liam, so it’ll be interesting to watch how he’ll handle his return. The card at the Oaklawn Park features Pippin Stakes with some exciting fillies and mares clashing for the purse of $150,000.

Let’s begin with this G3 turf race held at the Gulfstream Park Racecourse. The purse of $100,000 attracted a field of seven four-year-old and older participants who are about to cover the distance of a mile. Probably the first contestant capable of catching our eyes is six-year-old Largent (9-5), trained by Todd Pletcher as the gelding finished second in last year’s G1 Pegasus World Cup Turf Invitational Stakes.

In the past, the son of Into Mischief looked exceptionally talented, winning Allowance races, then successfully handling the black-type and Listed competition, upon which Largent struck gold in the G2 Ft. Lauderdale Stakes. He belonged among the top chances for the Pegasus World Cup Turf, and even though he lost to Colonel Liam, he came second only by a neck, suggesting that big things should be expected of him. However, Largent hasn’t hit the track since. He was given some rest, and as his target is the Pegasus World Cup Turf on January 29, he’s about to stretch his legs in the Tropical Turf Stakes. He’s a consistent performer as Largent has never finished worse than second; he should get the trip without problems, so the only thing stopping him could be the fact he hasn’t been out for so long, unlike his most serious rival, Value Proposition (8-5).

The Chad Brown bound six-year-old ridgling is yet to score a Graded victory, but he was second in the G3 Forbidden Apple Stakes in July, upon which he went on to bag wins in the black-type and Listed company. Last time out, Value Proposition couldn’t get past the fifth position in a Listed race; however, the distance might’ve been just too short for him, while on Saturday, he should relish the mile-long trip.

Truth be told, the rest of the field shouldn’t match Largent’s ability at all as Clear Vision (6-1) mostly stuck to the Claiming races in 2021, winning two of them, yet he also ran in second in the Claiming Crown Emerald Star Stakes in December. He should place in the Tropical Turf Stakes, which applies to Phat Man (5-1) as well. J Kent Sweezey’s charge used to belong among solid Graded performers as the eight-year-old managed to place in G3 and G2 races, ran in fifth in the G1 Churchill Downs Stakes in 2021, and also bagged the G3 Fred W. Hooper Stakes in 2020.

His results in 2021 haven’t been half bad as he placed third in the G3 in August and then followed on to grab second in a black-type event. Still, he’s an eight-year-old, with his most recent outing being well below par. All said things considered, Phat Man is a respected contestant here as he still should be capable of delivering fine effort, but his time at the Graded scene seems to have run out.

Our betting pick for the Tropical Turf Stakes is:

Largent. If he wants to play a significant role in the G1 on his next outing, he needs to perform well on Saturday, too, given it’s only a G3 company.

On Saturday, the card at the Oaklawn Park brings, most importantly, the Pippin Stakes, offering the purse of $150,000. The field seven of four-year-old fillies and older mares will clash at the distance of a mile on the dirt surface, including the Kentucky Oaks participant, Coach (9-5). The Brad Cox trained four-year-old filly finished third in the G2 Golden Rod Stakes, and despite the fact she hasn’t bagged a Grade victory yet, she was pointed to the Kentucky Oaks in late April, where she made no impact and finished ninth.

Since then, she made just one appearance – running well in the Allowance race in December, scoring the race over a mile and a half of a furlong by two lengths. She showed fine speed in the closing stage, leaving behind two of her Saturday’s rivals, third Wellington Wonder (12-1) and fourth W W Fitzy (8-1). Such a performance doesn’t define Coach as the clear shot in the Pippin Stakes, still displayed class in her 2020 and 2021 outings, so she should be able to strike gold here if she maintains her form from December.

Looking at the careers of other contestants here, five-year-old Josie (5-2) and a year older, Miss Bigly (5-2), look pretty similar. The former spent some time in maidens, Allowance races where she bagged three triumphs, and as Steven Asmussen aimed higher with her, Josie scored the black-type Iowa Distaff Stakes in July. Three subsequent outings didn’t go that well for the mare, so currently, Miss Bigly should be in better form. Still, she’s been running in maidens and Allowances for four years until she showed some spark also at the black-type scene.

In 2021, she won at that stage, finished second, bagged a Listed victory, and also ventured to the Graded company. For Philip D’Amato, Miss Bigly seized third places in both the G3 Chilukki Stakes and G2 Zenyatta Stakes, and even though she was no match for the winners of the mentioned events, being beaten by Private Mission or As Time Goes By doesn’t sound too bad. The last to mention is Breeze Rider (5-1), who’s won two black-type races in a row, suggesting she’s in good form; moreover, her class should be enough here to add another fine performance to her record.

Our Top Pick for the Pippin Stakes is:

Follow us on Social Media for Tropical Turf Stakes updates!