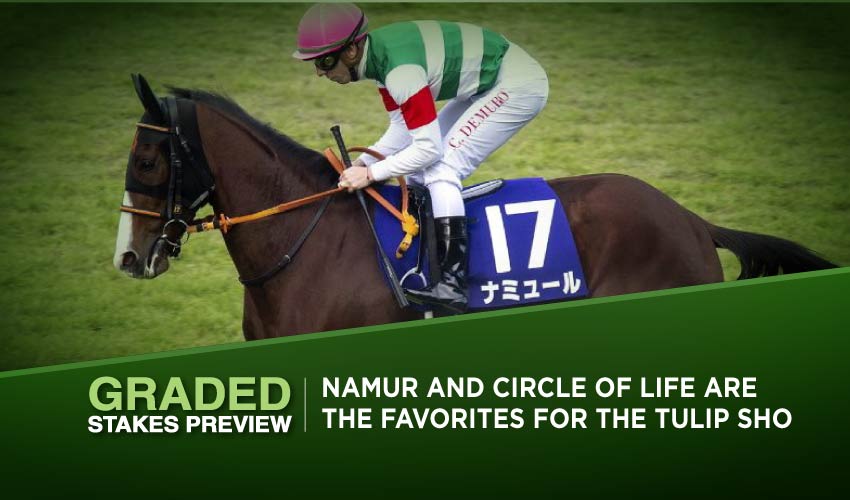 The upcoming weekend offers two trials for Japanese Classic races. At the Hanshin Racecourse, three-year-old fillies will meet in the G2 Tulip Sho over a mile, while G1 winner Circle of Life will attempt adding another big victory to her record, but Water Navillera and Namur could be close to her once again.

Saturday’s card at the Nakayama Racecourse then features the G3 Ocean Stakes for the four-year-old and older sprinters, and on Sunday, three-year-old colts will clash in the G2 Deep Impact Kinen where Do Deuce looks the leading chance after his G1 victory in December. Still, a trio of colts that ran a fine race in the G1 Hopeful Stakes could be dangerous to him, especially brave Lagulf.

The G2 turf serves as a major trial for the Oka Sho (Japanese 1000 Guineas), and therefore, it’s indeed closely watched which of fifteen three-year-old fillies strike gold, emulating, for example, outstanding Lucky Lilac. The purse of 99,000,000 Yen attracted G1 winner Circle of Life who is about to cover the distance of a mile.

The Sakae Kunieda bound filly broke her maiden at the second attempt, upon which she scored the G3 Artemis Stakes and surprised more preferred rivals in the G1 Hanshin Juvenile Fillies in December. She spent the race on the outside of the field; still, her finish in the final stretch was just breath-taking, and if she delivers something similar on Saturday, she should fight for the win once more as Circle of Life seems to be a real classy specimen.

Back in December, Water Navillera put up a bold run from the front and stayed on until the very end when a couple of rivals ran her down; however, she hasn’t done much wrong in her career, too. After winning a Newcomer race, she also scored a Stakes race and the G3 at the Hanshin Racecourse, so she was very familiar with the track when showing up in the Hanshin Juvenile Fillies.

Thanks to her bravery and suggested class, Water Navillera once again should be considered one of the main threats to the favourite alongside Namur, finishing fourth in the mentioned G1. At the beginning of the final stretch, she displayed a great turn-of-foot and then tried to close on Water Navillera, yet she came too late to better her. This time, she is expected to deliver a better performance.

Sternatia finished seventh in the G1 but should snatch a place here, while Sea Cruise needs to find more after winning the Stakes race at Tokyo to improve her from 12th place in the Hanshin Juvenile Fillies. Sound Vivace scored at the Stake scene in January, and she’s yet to face the Graded company like a duo of fillies who have just victorious debuts under their belts, namely Pin High and Rouge Stiria. Still, fillies with just one experience in Newcomer races tend to perform well even among more skilled rivals in Japan, so let’s see whether it’ll be the case of the mentioned couple.

Our betting pick for the Tulip Sho is Circle of Life because of her fine G1 victory. Water Navillera should be close to her once again.

The G3 race, also known just as the Ocean Stakes, is held at the distance of six furlongs, while the purse of 81,800,000 Yen is up for grabs. Fifteen four-year-old and older horses will meet on the turf surface with Naran Huleg looking one of the more interesting contestants of this trial for the Takamatsunomiya Kinen. The six-year-old horse has never scored a Graded race, but he seems to be currently in good form after finishing third in the G3 Silk Road Stakes in January.

He took the same place there also in 2020, collected some other places at the Listed and Stakes stage, while since October, he delivered three solid runs. Although he was second in a Listed race behind Savoir Aimer, she then failed to impress in the Silk Road Stakes; still, they could both be big players in Saturday’s race. The field is quite competitive, though, so the winner of Listed at the Chukyo Racecourse, Smart Courage, also could be a victory candidate due to his exploits at the Stakes stage. Since June 2021, the five-year-old horse hasn’t been worse than the third, bagging three wins and boasting fine form.

Meiner Gerodi is another one to consider after his Stakes third place in Kokura as it happened in February; thus, the four-year-old colt should be fresh and fit, unlike some of his rivals; moreover, he’s still young and probably capable of some progress. The Stakes race was won by five-year-old mare Biografie back then; however, all of her attempts of facing a better competition failed, so maybe even the second mare behind her, Detroit Tesoro, looks more appealing, given she’s yet to meet Graded company.

Due to the fact she’s been quite reliable in the Stakes races, she deserves this chance. Three other participants could well fight for the victory here as all of them are Graded winners, yet their most recent performances simply didn’t work out for them. We’re talking about smart Bien Fait and First Force, who even bettered Pixie Knight in the G3 CBC Sho in June. The last to mention is Gendarme, a seven-year-old veteran who still could be capable of running a good race in this competition.

Our top pick for The Yukan Fuji Sho Ocean Stakes is:

First Force. The field is full of winners at the lower stages and horses who didn’t have much luck in their last outings, while First Force is one from the second category, while we believe that with some luck on his side, he should add another G3 victory to his record here.

The primary trial for the Satsuki Sho (Japanese 2000 Guineas) welcomes a field of ten three-year-old colts who are about to hit the turf track for the purse of 103,500,000 Yen. On the distance of a mile and a quarter, Do Deuce () till put his unbeaten record on the line.

The son of Heart’s Cry ran three times in 2021, bagging his debut, and then the Listed Ivy Stakes, upon which he concluded the season with a victory in the G1 Asahi Hai Futurity Stakes at the Hanshin Racecourse. Do Deuce hasn’t tried a trip longer than a mile and a furlong, but if his team wants him to succeed in the Japanese 2000 Guineas, he needs to handle Sunday’s distance with ease, and we think he will.

Under Yutaka Take, the Yasuo Tomomichi bound colt burst with energy in the closing stage of the mile-long Asahi Hai Futurity Stakes and given he relies on his fatal finish from the rear of the field, another furlong really shouldn’t bother him. In terms of handling the trip, Lagulf has shown an affinity towards the distance of a mile and a quarter in the G1 Hopeful Stakes, where he managed to snatch third place in the last second.

The son of Maurice had no issues with stepping up his game as he showed up among the elite just after snatching up a Listed victory, which was the case also of Born This Way, a Stakes winner who finished fifth in the Hopeful Stakes. Both of them look interesting for Sunday’s event; still, Do Deuce is the one to beat here.

There are several promising three-year-olds in the field, while Justin Rock belongs among those who need to be mentioned here as after winning a maiden, he scored the G3 Radio Nikkei Hai Kyoto Nisai Stakes at the Hanshin Racecourse.

His performance at the distance of a mile and a quarter was eye-catching, so we’ll see how he’ll cope with a stronger company. Matenro Leo has already met the elite in the Hopeful Stakes, where he grabbed a fine sixth place; moreover, he should be fresh and fit for the Deep Impact Kinen thanks to his recent outing in the Kisaragi Sho in February. He bagged a narrow win back then, with Meisho Gekirin finishing third after showing the way.

Our betting pick for The Yayoi Sho – Deep Impact Kinen is:

Do Deuce, whose performance in the G1 Asahi Hai Futurity Stakes was impressive and definitely promising for the future. If the bay is to remain one of the favourites for the Japanese 2000 Guineas, he should strike gold on Sunday. The race is very open behind him but we might stick with Matenro Leo for taking a good place here.