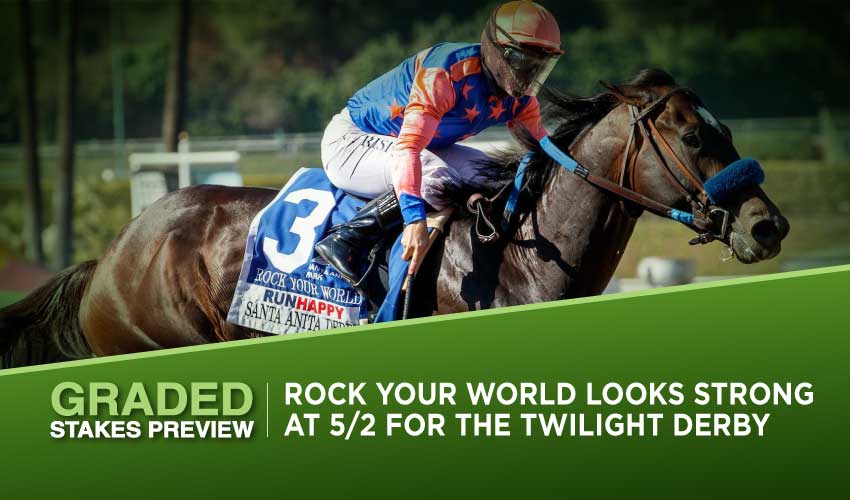 The weekend at Santa Anita Racecourse offers cards packed with exciting action, while the pinnacles are once again focused on the three-year-olds. Three-year-old fillies meet in the mile-long Autumn Miss S on Saturday, while the G2 Twilight Derby for colts and geldings headlines Saturday. Kentucky Derby participant Rock Your Worlds looks like the leading player there, yet he’ll face some quite promising rivals on the turf surface.

This G3 turf race welcomes a field of eight three-year-old fillies who are about to clash at the distance of one mile. The $100,000 event has its favourite in Zero Tolerance (3-1), who scored her first Listed victory three weeks ago in the Unzip Me Stakes over six and a half of a furlong. Prior to that, the Peter Miller bound grey had only two starts under her belt, finishing second in a maiden before winning one, so she went into the Listed as not much experienced filly; however, her performance was brilliant.

Galloping at the rear of the field, Zero Tolerance made a massive move in the final turn, and despite the fact she ran very wide, she managed to find something more in the stretch to leave all of her rivals behind. Saturday’s race seems a logical step up for her in case she handles the mile distance. In the Unzip Stakes, she already competed against Burgoo Alley (4-1), a way more skilled filly, who had basically ideal run back then, still couldn’t delivered a more commanding finish than the winner and had to settle for third.

Unlike the favourite, Spanish Loveaffair (7-2) has been a finished article for some time, and even though she hasn’t scored a Grade victory, she placed second at the G2 level in 2020. Throughout this season, it’s fair to say she hasn’t displayed anything extraordinary, but she can do her job when the race unfolds favourably for her, which happened in the G2 Lake Placid Stakes in August; however, the leader collided with her in the final turn. Spanish Loveaffair wouldn’t have fought for the win anyway back then; still, he suggested to be in fine form last time out when winning a Listed easily.

She’s a decent filly, as well as Ego Trip (5-1) hinted to be when taking third place in the mentioned G2 race. It was only the third start of her career; thus, the start could’ve only helped her for the future. Although she carries more weight than her rivals, Madone (7-2) is definitely in the mix as she’s a G2 winner when scoring the San Clemente Stakes. Her last two efforts were underwhelming, indeed, but when she returns to the mile distance and a G3 competition, she needs to be considered.

Our Betting pick for the Autumn Miss Stakes is Madone, who is certainly a classy filly; however, she needs to close on the rivals in time.

Only three-year-old participants head into this G2 turf race with the purse of $200,000 as a field of ten colts, and geldings cover the distance of a mile and a furlong. Despite the fact that most contestants look ready to play a significant role here, Rock Your World (5-2) is the one attracting attention, given he’s the G1 Santa Anita Derby winner. Thanks to his impressive performances, he joined the leading chances for the Kentucky Derby, where he, unfortunately, faced one of the worst possible gates, and thus, finished down the field after a below-par run. Still, the John W. Sadler’s charge didn’t fire well in the Belmont Stakes, too, and couldn’t win even a Listed last time out. To be fair, he lost only to Medina Spirit, which wasn’t surprising in the slightest.

Rock Your World has always seemed hugely talented, so after a pause, he could retain his charm when returning to the turf surface and competition he should be able to run down. Moreover, he’s still run only six times, so there’s plenty of room for some progress, and to accentuate his inexperience, his most serious rival has 14 outings under his belt. None Above The Law (5-1) trained by Peter Miller caught the eyes in April/May when bagging a Listed double, and even though he failed to deliver in two following races, he then scored a black-type and the G2 Del Mar Derby in early September.

The grey gelding progressed considerably in the past months, but it should be stressed he had a remarkably smooth run last time out. Sitting fifth at the fence, he rallied forward in the final stretch as he was granted a gap he exploited to the fullest. Winning nicely at Sunday’s distance, he’s in the mix, he handles any surface, but it’s unlike he’ll get an as perfect trip as back then.

Speaking of the Del Mar Derby, None Above The Law bettered second Flashiest (10-1), fourth Cathkin Peak (10-1) and a few other rivals aiming for Sunday’s race, while Flashiest was running wide a considerable part of the race. When being luckier throughout the event, he could actually be the favourite’s biggest threat.

Ex-French Wootton Asset (12-1) trained by Graham Motion showed a great turn of foot in the G3 New Kent Virginia Derby to bag it by ¾ of a length and is considered once more, but it’s a question whether he’s smart enough to run down a rival like Rock Your World. The same could be applied to Subconscious (5-1) and Beyond Brilliant (8-1) as the John Shirreffs’ charge won an Allowance race last time out and looks to be a promising prospect for the connections.

Our top pick for the Twilight Derby is Rock Your World who could return to winning way here, drawing on his victory in the G2 Santa Anita Derby.

Get a Daily Rebate and make sure to stay tuned for the latest Racing odds, and Horse racing entries.