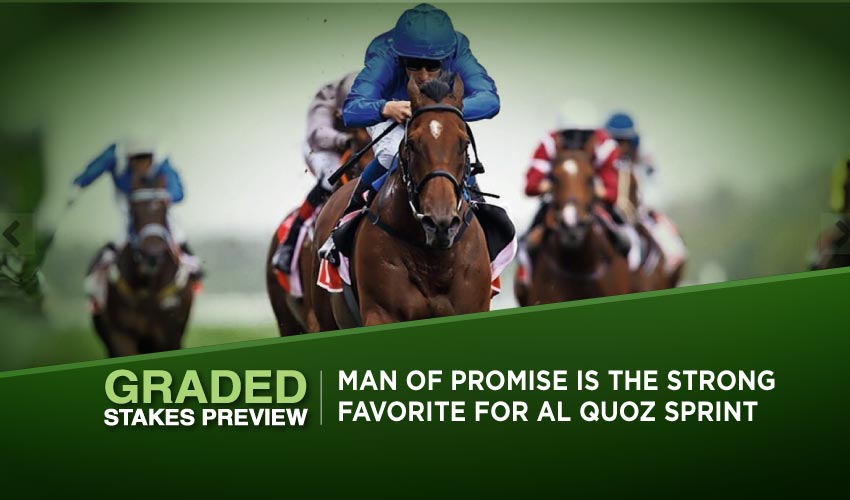 The high-stakes, high-prestige meeting at Meydan in Dubai on Saturday features eight Group races and has attracted a cosmopolitan cast-list, with runners from the US, Britain, France, Ireland, Japan and Saudi Arabia joining the home team for the duel in the desert.

The pick of the undercard is the G1 Al Quoz Sprint, featuring the much-improved Man Of Promise and tough US raider Casa Creed, while the G2 UAE Derby is a 100pt qualifier for the Kentucky Derby and has drawn Combustion and Sekifu from Japan to take on the Bob Baffert-trained Pinehurst.

The UAE Derby – which offers ‘Road to the Kentucky Derby’ points on a 100-40-20-10 breakdown – shakes down into a straight fight between the US and Japan, with the outcome of the Saudi Derby a month ago potentially the key to unlocking the puzzle.

On that occasion the Bob Baffert-trained Pinehurst made much of the running and held on gamely in the closing stages, his advantage diminishing with every stride, to win by a half-length from Sekifu, who could never get track position until the winner had flown, but who would almost certainly have passed Pinehurst in another 50 yards. Kiefer finished sixth and Island Falcon eighth.

The difference this time is the distance, which plays very much to the strength of Sekifu. Pinehurst only scrambled home, and with another furlong and a half to run today is not at all certain to see out the race. On his only attempt beyond a mile he was fifth in the Breeders’ Cup Juvenile, a poor contest in any case, and his natural speed – an advantage in Saudi Arabia – could work against him now. Sekifu himself has never won beyond seven furlongs, but looked to be crying out for further in Riyadh and connections will be very hopeful of flipping the form.

However, Combustion has arguably an even better chance for Japan after his game victory when making his stakes breakthrough over a mile at Tokyo last month, with Crown Pride not beaten all that far in sixth place. He will be sharper with that run under his belt and is owned by Godolphin, who would surely have found another candidate for one of their flagship races if Combustion wasn’t deemed to have a favourite’s chance.

The American challenge is backed up by Gilded Age , a maiden winner who finished a soundly beaten third in an ordinary renewal of the G3 Withers at Aqueduct last month. He needs to move up but should at least handle the distance, while compatriot Get Back Goldie was a well-beaten sixth in a stakes over course and distance three weeks ago.

The winner that day was Quality Boone , who rallied strongly to lead close home and beat Withering by a length and a quarter, with Bendoog a nose away third. All three are likely to be in the mix given their experience of the track.

Another to consider is the Russian-trained Azure Coast, who would be an unpopular winner for obvious reasons, but who has strong credentials after winning the G3 UAE 2,000 Guineas here over a mile last month by two lengths from Kiefer, with Quality Boone and Bendoog close up in third and fourth.

Top Choice for the UAE Derby:

The distance may be the undoing of Saudi Derby winner Pinehurst, so Japanese raider COMBUSTION is preferred. He won a stakes on his reappearance and will be sharper now.

International marathon races on turf can be quite uncompetitive despite a big field, and the Dubai Gold Cup is essentially a match, with only two horses quoted at single-figure odds.

The heavy favorite is Godolphin’s Manobo, who is unbeaten in five starts in three countries: England, France and the UAE. His best performance was probably when a dominant winner of the G2 Prix Chaudenay at Longchamp in October, but any consideration that he was merely a mud-lover was put to rest on his most recent start, in the G3 Nad Al Sheba Trophy here over a mile and three-quarters on good ground.

He went to the lead two and a half furlongs out and ran on strongly to beat longshot East Asia by five and a half lengths, the margin of victory no guide to his total superiority. Rodrigo Diaz was a never-in-it sixth. Manobo is yet to be fully tested and there’s no knowing how good he might be, although he is certainly better than Godolphin’s other two runners Volcanic Sky, a distant last of 11 in this race last year, and doubtful stayer Passion And Glory.

The main – possibly only – danger is Stay Foolish, who was part of the Japanese domination on Saudi Cup day last month when making light of the sharp step up in distance in the G3 Red Sea Turf. He made all under an inspired Christophe Lemaire, keeping on willingly all the way to the line, and although he has to travel an extra furlong here it won’t be an issue.

He previously had the speed to run fifth in the G1 Hong Kong Vase over a mile and a half, and if he gets loose on the lead again Manobo may not be able to reel him in. Irish hope Baron Samedi – who would prefer softer ground – finished best of all in the Red Sea Turf to claim fourth place, albeit eight lengths behind Stay Foolish, with Mirinaque a further length away in sixth.

Fellow Japanese raider Veloce Oro is proven at this distance and was a fair fifth – beaten four lengths – in the G3 Diamond at Tokyo last month, but he lacks the class of his compatriot. Emperor Of The Sun had no chance over ten furlongs in the G3 Bahrain International Trophy in November, and the G1 Irish St Leger fifth – four and a half lengths adrift of third-placed Baron Samedi – will be seen to better effect at this distance, as he stays two and a half miles. There are worse alternatives for exotics players.

The odds-on Manobo may very well extend his unbeaten run, but isn’t a betting proposition and the high-class front-runner STAY FOOLISH is generously priced given his recent good form.

Godolphin have set out their stall to win the Al Quoz Sprint by putting four in the gate, including the strong favorite Man Of Promise, who has seemingly been transformed since finishing eighth in this race last year.

That was his final start of the campaign, and this year he is two-for-two over course and distance, winning a stakes and then running them out of town in the G3 Nad Al Sheba Turf Sprint, seeing off runner-up A Case Of You by four and three-quarter lengths, with British G1 winner Emaraaty Ana beaten out of sight, although there was evidently something amiss and he is better than that.

Given his rapid progress, Man Of Promise may also be better than he showed, and with the advantages of race fitness and more suitable ground probably has the call over barnmate Creative Force , who signed off his 2021 campaign when winning the G1 British Champions Sprint at Ascot over today’s distance. Soft ground seems the key to him, though, and he doesn’t get it here.

Godolphin third-string Naval Crown was favorite for the G3 1351 Turf Sprint over seven furlongs on Saudi Cup day last month but ran poorly, 11th of 14, and has never raced at six furlongs before. He might find it all happening too quickly, as might Mutafawwig, beaten over seven furlongs on his last two starts here by Storm Damage, although bettors can check the form as that horse goes in the opening Godolphin Mile.

Doing much better in the 1351 Turf Sprint was US raider Casa Creed , who went under by only a neck to the fast-finishing Songline, with Happy Romance another neck back in third after being caught in the last two jumps, and Lauda Sion beaten another three and a half lengths into fourth. Entscheiden was way back in 12th.

Casa Creed won the G1 Jaipur at Belmont Park over this distance in June, but it wasn’t a notably strong contest and he appears better over further than today’s quick six. Conversely, Happy Romance was stretching out in Riyadh and is now back at the distance over which she won the G3 Hackwood at Newbury in July, and her trainer’s horses are always better with a run under their belts.

The form that French filly Suesa showed when winning the G2 King George over the flying five at Glorious Goodwood last summer would give her an excellent chance in this, but she was well below that level on both her subsequent starts and she seems to need everything to fall into place – she’s best delivered very late, and six furlongs may not suit her best.

The recent course-and-distance form of Man Of Promise is strong, but HAPPY ROMANCE will improve plenty for her reappearance and both ground and distance are perfect.

The opening contest at Meydan on a Saturday afternoon loaded with stakes and brimming with prize-money is the Godolphin Mile, which has drawn runners from five countries and is one of the few races on the day that has a good chance of falling to a local trainer.

Bhupat Seemar puts three in the gate including likely favourite Al Nefud, who has improved considerably since leaving Britain and ran his best yet when chasing home the top-class Hot Rod Charlie in the G2 Al Maktoum Challenge here over a mile and three-sixteenths last month.

He was beaten five and a quarter lengths, but was seven and a half ahead of the third horse, and it was a step up from his previous start in a minor contest over course and distance in January, when he led all the way and beat Desert Wisdom by two and a quarter lengths.

Last time out Desert Wisdom franked the form when a longshot winner of the G3 Burj Nahaar over course and distance, beating Mubakker by a length and a half and Tuz, Seemar’s third-string, by a further three-quarters of a length. Golden Goal was eighth. That was Mubakker’s first try at a mile and it may have been a step too far.

This represents significant class relief for Seemar’s other runner Secret Ambition, the oldest in the race at nine, who tried to go gate-to-wire in the G1 Saudi Cup but found his stamina reserves empty a furlong out, eventually finishing seventh behind boxcar longshot Emblem Road. Twelve months ago he demolished his rivals in this race, leading all the way to beat Golden Goal by six lengths, with US raider Snapper Sinclair fourth, and a repeat of that performance would make him hard to catch.

Godolphin’s best chance lies with the improving Storm Damage , who is hunting a three-timer after two wins here at seven furlongs on turf, the most recent in a valuable conditions contest. The extra distance in a race with no shortage of speed is a concern, as is the change of surface. His barnmate Dubai Icon has been well beaten on his last two starts and cuts back to a mile now from ten furlongs.

Last year’s Saudi Cup third Great Scot comes back to the distance at which he chased home this year’s Saudi Cup winner Emblem Road in Riyadh in January and could move up, while the leading Japanese contender is probably Soliste Thunder , who was beaten three lengths into fourth in the G1 February over a mile at Tokyo last month. He has won at G3 level but this looks tougher.

Last year’s easy winner SECRET AMBITION was caught out by a class rise and a longer distance last time, so is the choice to repeat now he returns to his preferred level at a mile.