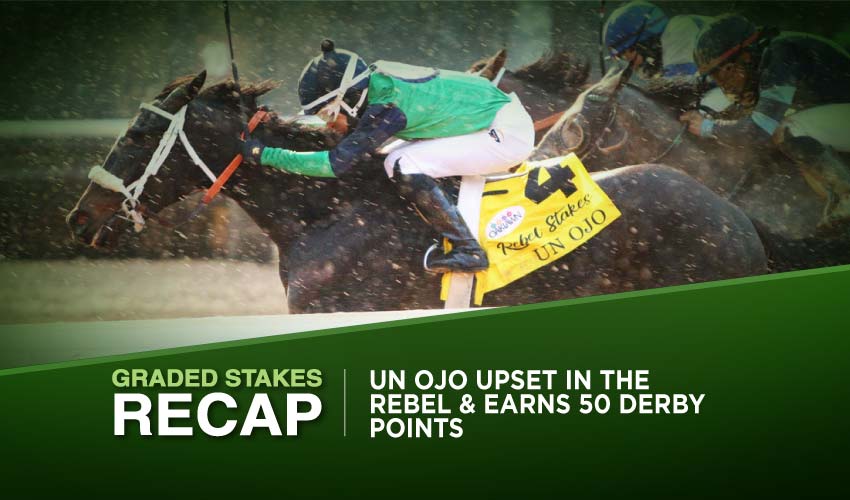 Saturday’s card at the Oaklawn Park featured two trials for the Classic races of 2022. Three-year-old fillies clashed for valuable points in the G3 Honeybee Stakes where preferred Secret Oath didn’t disappoint at all as she might’ve even put some people in awe thanks to her effortless victory.

Among three-year-old colts, one-eyed Un Ojo caused an upset when running a brilliant race in the 2022 Rebel S, denying promising Ethereal Road a win by a half of a length. While Secret Oath tops the Kentucky Oaks leader board thanks to her effort, Un Ojo is second in the Kentucky Derby leader board.

Three-year-old fillies competed for the purse of $300,000 and 50 points towards the Kentucky Oaks in this G3 race run on the dirt surface. Secret Oath (30-100) trained by Wayne Lukas was the leading chance to succeed on the distance of a mile and a half of a furlong; however, Luis Contreras aboard didn’t rush anywhere with his mount.

Initially, they settled at the rear of the field, gradually he urged the chestnut filly to move closer to the front, and as the leading filly faltered, Secret Oath seized the first place easily when turning for home. It took some time before she shook off bravely fighting duo Ice Orchid (139-10) – Yuugiri (18-5), but in the end, the favourite drew clear from them and galloped towards an impressive victory by seven and a half of a length in 1m 44.74s.

Currently, Secret Oath looks to be the classiest offspring of late Arrogate. After running a good race close to the lead, Ice Orchid and Yuugiri had a lead just for a while before Secret Oath swept by them; still, nobody could’ve really robbed them of earning some valuable points for the Road to the Kentucky Oaks as the former was awarded 20 of them, the latter 10 of them.

Despite crossing the wire far behind the mentioned trio, Free Like A Girl (46-1) also got some points for the Kentucky Oaks, five to be precise, unlike Optionality (98-10), starting off here as a serious place contender. However, upon leading the field throughout most of the race, she weakened considerably in the final turn and finished hopelessly last of all.

Fifty points towards the Kentucky Derby and the purse of $1,000,000 were offered in this G2 race held at the distance of a mile and a half of a furlong. The Rebel Stakes has been a vital part of the series of trials for the first Triple Crown race, so despite the fact this year’s edition didn’t attract such a quality field, it resulted in a rather interesting event.

On the dirt surface, eleven three-year-old colts clashed, while since the beginning, everything went into the favourite’s stride as Newgrange (5-4) showed fine early speed, upon which he settled second behind the leader.

However, the best ride of all jockeys delivered Ramon Vazquez aboard outsider Un Ojo (75-1). We mentioned the Ricky Courville trained bay in our preview due to his good effort in the G3 Withers Stakes, where he finished second, but he just wasn’t expected to run down all of his rivals in this valued Kentucky Derby trial.

The son of late Laoban wasn’t the quickest out the gate; however, he managed to use a gap at the fence, saved some energy there, and waited until the final stretch where the jockey urged him forward. Un Ojo then rallied on, joined the leading pair, and looked to secure third place at best; the closing stages saw him utterly flying, though. In a matter of a few seconds, Un Ojo switched to another gear, left the duo behind, and scored his premiere Graded victory in 1m 45.69s.

Thanks to this performance, the one-eyed-colt earned 50 points and seized a second position in the Road to the Kentucky Derby leader board, topped only by the Risen Star Stakes victor Epicenter.

In this year’s Rebel Stakes, everything played into Un Ojo’s favour, so it’s no wonder he triumphed, but another colt who suggested to be capable of big things is Ethereal Road, taking 20 points here.

The Wayne Lukas bound bay won a maiden race last time out, being totally impressive back then, while he put up a very good performance on Saturday, too. The son of Quality Road wasn’t quick on his feet right away and was basically sentenced to run wide both turns due to his outsie draw.

Although he wasted some needed energy on running so wide, he managed to get the lead in the final stretch, fighting heartily with Kavod and beating him by a nose. He lost to Un Ojo by a half of a length, but if he has a better trip next time out, he is a Graded victor in the making.

Several times mentioned Kavod delivered another brave front-running performance and once again lost the race in the closing stages. After finishing fourth in the Southwest Stakes, he settled for the same place in the Rebel Stakes as Barber Road (13-2) denied him third place thanks to his late finish.

In the final stretch, Barber Road had some traffic issues but managed to use his momentum to secure 10 points towards the Kentucky Derby. Kavod earned five as more preferred rivals grew empty right at the final turn.

It was the case of interesting Chasing Time (54-10) who faltered to fifth after a good start, while Newgrange lost his unbeaten record, finishing only sixth. Bob Baffert’s trainee spent the race in second; however, he got squeezed when arcing the last turn, so either he was discouraged by it so much he just gave up or was simply tired already when colliding with his rivals.

Follow us on Social Media for 2022 Rebel S updates!