Unbeaten Baaeed was the real star in the Lockinge Stakes 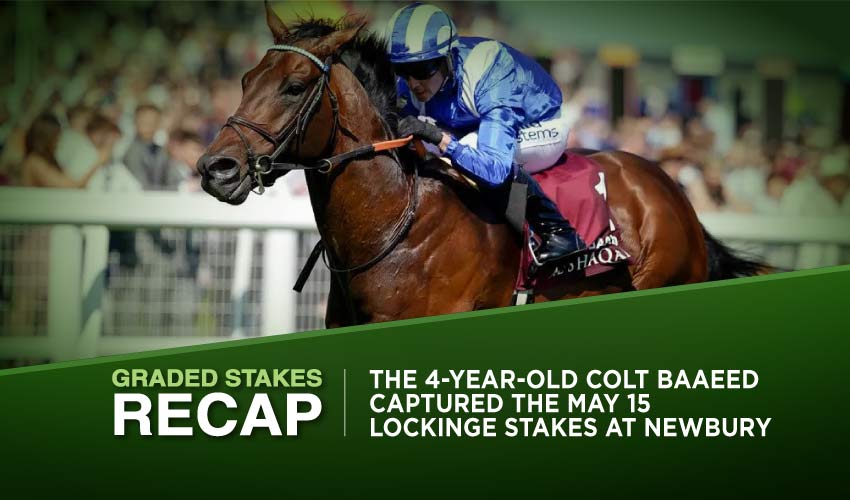 The pinnacle of Saturday card at the Newbury Racecourse was the mile-long G1 Lockinge Stakes. The British gem attracted a field of nine horses, including unbeaten Baaeed, who remained superb even after his seasonal debut, bettering second Real World by more than three lengths.

The first G1 of the British Flat season saw nothing short of a performance of a true champion. On the turf surface, nine four-year-old and older horses clashed at the distance of a mile, vying for the purse of £350,000.00, while unbeaten Baaeed (4-9) was the real star of the show. The four-year-old colt travelled just sweetly under Jim Crowley, and as soon as the jockey pointed him into a free space and nudged him forward, the William Haggas bound bay bolted up.

With enthusiasm, Baaeed took command, drew clear from his rivals, and cruised towards a smooth victory in 1m 35.71s. Real World (5-1) was the best of the rest to secure second place, 3 and ¼ of a length behind the favourite, with Chindit (20-1) taking third place.

Four-year-old Baaeed boasted some class since his debut in 2021, and once he destroyed the competition of a G3 event, he started off as a favorite for both of his last year’s G1 starts – the Prix du Moulin and Queen Elizabeth II Stakes. Although he faced quite fierce foes back then, Baaeed managed to prevail on both occasions, and despite him just entering the season on Saturday, he didn’t hesitate for a bit.

From the beginning until the end, Baaeed looked like a champion. He was relaxed, waiting patiently for the closing stages, and when he charged forward with vigour, it’s no wonder some experts are already comparing the colt to the mighty Frankel. Behind the son of Sea the Stars, five-year-old Real World appreciated relocation to the turf surface instead of the dirt he raced on in Riyadh and Dubai. In the Lockinge Stakes, he delivered one of his best career efforts.

The victor of the G2 Prix Daniel Wildenstein on very soft ground, Real World bagged another G2 win in Dubai on the good ground, showing his certain versatility in terms of the ground. In combination with the suggested class, the bay was expected to take second place regardless of conditions.

Real World managed to do exactly so after a good ride by Daniel Tudhope, bettering third and bravely from the front going Chindit. Alcohol Free (11-1) ran in fourth after missing her favorite soft ground, with Sir Busker (33-1) finishing strongly to secure the fifth spot.

Follow us on Social Media for instant Lockinge Stakes updates!