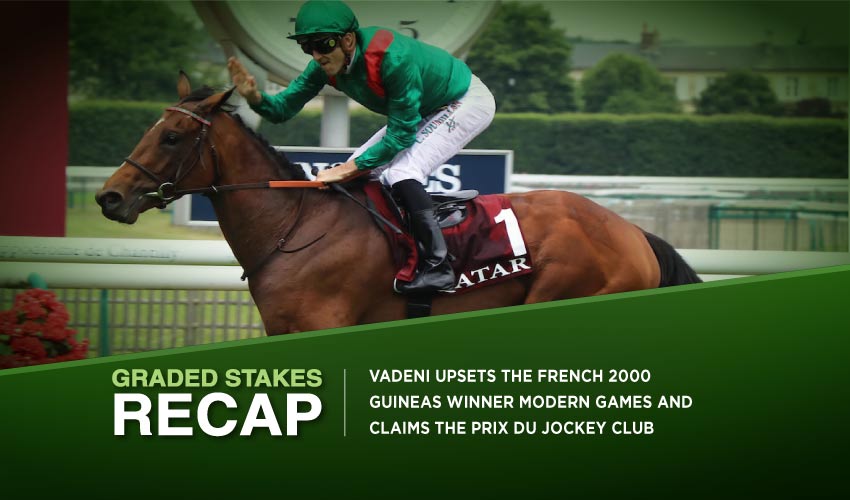 The French Derby stayed at home once again. On Saturday, the Chantilly Racecourse saw the impressive victory of Vadeni in the G1 Prix du Jockey Club, where the Jean-Claude Rouget bound bay demolished the field full of British and Irish raiders, including the French 2000 Guineas winner. However, Modern Games managed this time only third place.

The third Classic race of the French Flat season was, naturally, open only to three-year-olds who clashed at the distance of a mile and two and a half furlongs. On the turf surface, fifteen participants showed up in this €1,500,000 G1 event perceived as the French Derby, and even though the field was packed with exciting contestants from the British Isles, it was local colt Vadeni (68-10) who landed the spoils for Jean-Claude Rouget.

After travelling in fifth, Christophe Soumillon just pointed his mount into a gap in the final stretch by which he decided the race for himself as Vadeni bolted forward and cruised home, utterly unchallenged. Thanks to his breath-taking turn of foot, he crossed the wire in 2m 6.65s with the advantage of five lengths over El Bodegon (14-1), who dug deep to better third Modern Games (21-10).

The victorious son of Churchill belonged among the most anticipated participants because of his most recent performance – he displayed a beautiful speed in the final stretch of the G3 Prix de Guiche, which was one of the trials for the Classic races.

Vadeni has always looked like a talented colt, but the mentioned effort really put him in the Derby picture; but there probably weren’t many people who expected Vadeni to destroy the field the way he did. In the future, the colt probably won’t be pointed to the Prix de l’Arc de Triomphe as he’s about to run in the Irish Champion Stakes.

El Bodegon was the best of the rest, in other words, of the British and Irish guests. The James Ferguson trained colt scored the G1 Criterium Saint-Cloud in 2021; still, his seasonal reappearance resulted only in seventh place in the G2 Dante Stakes. Therefore, he was strongly underestimated for Sunday’s race. Still, under Ioritz Mendizabal, he delivered a bold ran after sitting close behind the leaders, and in the final stretch, he really gave everything to better Modern Games by a short head.

Modern Games had a similar gallop as in the 2000 Guineas. He set the pace and galloped on the front; however, the distance just proved too much for him as he considerably weakened in the closing stages, upon which he had to settle for third, with fourth Al Hakeem (42-10) being the best of the participants finishing from the rear of the field.

Onesto (10-1) and Vagalame (39-1) ran in fifth in a dead-heat, splitting the earnings for fifth and sixth places. Ancient Rome (77-10) didn’t build on his promising performance in the French 2000 Guineas, running only in ninth place for Andre Fabre, while Aidan O’Brien’s duo of runners didn’t even slip into the first ten finishers.