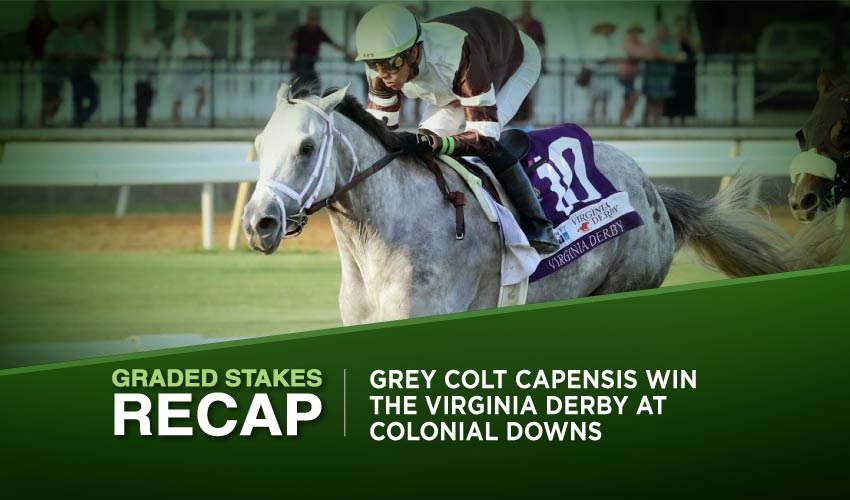 Irad Ortiz was the man of the hour at Colonial Downs on Tuesday, coming fresh from clinching the meet title at Saratoga to win five races, including the feature 2022 Virginia Derby (G3) aboard Capensis and the Virginia Oaks on Spirit And Glory. There was an upset in the Kitten’s Joy, with Gigante much too strong for heavy favorite Rarefied Flair.

There were more accomplished horses in the Virginia Derby, but bettors wanted Capensis and they were right, the grey colt bet down to 8-5 favorite before cruising home in the marquee event of the year at Colonial Downs.

The British import Royal Patronage ran free on the lead, while Capensis sat chilly in mid-pack before moving up to challenge as they quit the turn. The spent leader folded in mid-stretch and Capensis surged to the front, quickening away to cross the line two lengths clear as the posse closed in, stopping the clock in 1:48 and one-fifth. The longshot California Frolic beat out Limited Liability for the runner-up spot by a neck, with the second-choice Royal Patronage fading back to seventh.

The victory crowned a remarkable day for jockey Irad Ortiz, who signed for five wins through the afternoon. It was the third success in the Virginia Derby for trainer Todd Pletcher, while Capensis – who cost $2m at the yearling sales and was unraced before July 2 – is now two-for-three and heading for deeper water.

She was bred to be a sprinter, but the ex-Irish Spirit And Glory has found her place in the world by stretching out and made her stakes breakthrough with a back-to-front score in the Virginia Oaks.

The 8-1 shot had six horses ahead of her at the top of the lane but produced a long, smooth run down the outside under hot-hand jockey Irad Ortiz to lead at the sixteenth pole, rolling on to win by a length and a quarter from longshot Sparkle Blue. Candy Light was the same margin away in third, while the favorite Surprisingly was a never-dangerous seventh. The stopwatch showed 1:48 and one-fifth.

Spirit And Glory is three-for-seven lifetime, a decent resume but one surpassed by her trainer Robert Falcone, who is now five-for-six at the Colonial Downs summer meet.

There was an upset in the Kitten’s Joy as 1-5 favorite Rarefied Flair was given a schooling by Gigante, who came home six and three-quarter lengths clear on his stakes debut.

In front for much of the way, Gigante easily put away the challenge of Rarefied Flair when that rival loomed large around the turn and after that jockey Feargal Lynch was always in cruise control, stopping the clock in 1:44 and change. The favorite kept the ‘place’ slot by four and three-quarter lengths over Free Soul.

The winner, trained by Steve Asmussen, was reverting to the lawn after breaking his maiden here on the main track.

Stay tuned for the latest Breeders’ Cup Odds, Entries, and Results, and don’t forget to Sign-up to get our daily horse racing news and become a winner!

Follow us on Social Media for more Virginia Derby updates!