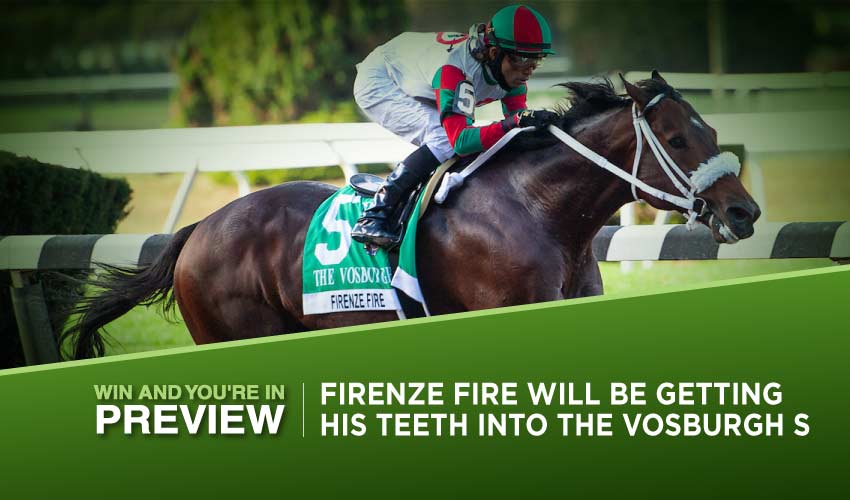 Something for everyone at Belmont Park on Saturday afternoon, with a Ryder Cup-esque standoff between local star Gufo and Irish ace Japan taking center stage in the Grade 1 Joe Hirsch Turf Classic. The now-infamous sprinter Firenze Fire will be getting his teeth into the Grade 2 Vosburgh Stakes alongside new speed sensation Baby Yoda, and a big field of two-year-old fillies in the Grade 3 Matron will also give bettors something to chew on.

Five of today’s fields met in the Grade 1 Sword Dancer at Saratoga last time, when Gufo beat Japan, who beat Cross Border, Rockemperor, and Channel Maker. That was the second win in two starts for Gufo with blinkers fitted, and the headgear has certainly contributed to his improved form. Maturity and experience have also been a factor, but blinkers have certainly concentrated his mind.

The four-year-old sat last at the Spa until coming with an irresistible stretch run to grab the gold by a neck, fending off the last-ditch challenge by Japan. He’s 2lb better off with the Irish raider at a track where he is two-for-four, and there’s no knowing whether those blinkers are still moving him forward.

That was arguably Japan’s best performance of 2021, and he might even have won if he hadn’t had to switch outside in mid-stretch, losing a little momentum. He put his head down and ran once in the clear, and the European style of Belmont’s big track could suit him more than Saratoga. The jockey change is no disadvantage, as Wayne Lordan rode him into third place in the 2019 Derby at Epsom.

Cross Border was three and a half lengths back in third, and although he finished his race off well he was never a threat to the front two. He confirmed the running of the Grade 2 Bowling Green at the Spa with Rockemperor and Channel Maker, but he was only sixth in last year’s Joe Hirsch and is zero-for-seven at Belmont Park, so it’s hard to see him turning the tables on Gufo and Japan. That also goes for Rockemperor, who has won just once in his last 14 starts and has never won a stakes race.

That tough cookie Channel Maker won the Joe Hirsch in 2018 and again last year when he was in the form of his life and went on to be third in the Breeders’ Cup Turf. He hasn’t won since, and in his last three starts has looked a shadow of his old self. He’ll be on the front end as usual but perhaps he’s no longer up to this level of competition.

Fellow veteran Arklow won the Joe Hirsch in 2019 but looked, like Channel Maker, to be losing his form until bouncing right back in the Grade 2 Calumet Cup at Kentucky Downs, when he finished like a rocket but came up a neck short of Imperador. This is a much tougher spot, but he’s evidently still in good heart. He finished behind Serve The King in the Grade 1 United Nations at Monmouth Park in July, and Serve The King would be easy to throw out were it not for his win last time in a stake at Saratoga, although he’s probably out of his depth in this company.

The outcome of the Sword Dancer should provide the answer to the Joe Hirsch. JAPAN might have won that contest with a better trip and can turn the tables on Gufo here.

A short field for the 2021 Vosburgh Stakes but one long on interest, not least in regard to whether Firenze Fire is angry enough to start snacking on a rival in this ‘win-and-in’ for the Breeders’ Cup Sprint.

No one who has seen the finish of the Grade 1 Forego at Saratoga will forget the sight of Firenze Fire reaching over to gnaw away at Yaupon during their stretch run, a duel he could have won if he’d kept his mind on the topic instead of losing out by a head. That was probably the six-year-old’s best-ever run away from Belmont Park, where he has won seven races, including last year’s renewal of the Vosburgh.

That day he was fully in command, extending his advantage all the way down the lane, and he’ll almost certainly run a big race back on his favorite surface. This looks a lot tougher than last year’s Vosburgh Stakes, though, and he’ll need to be right on top of his game.

The morning-line favorite Baby Yoda is half Firenze Fire’s age and has precisely one-ninth his experience, but also has all his speed given his showing at Saratoga last time, when he tore up an allowance race by four and a quarter lengths on the way to earning a huge Beyer figure. The numbers look good, but this is a major step up for a raw colt and there is absolutely no value in his odds against established Graded performers.

Fellow three-year-old Following Sea returns to a much more suitable distance after banging his head against a brick wall in the Grade 1 Haskell over a mile-eighth and the Grade 1 Allen Jerkens over seven furlongs, where he could never get a hold on speedballs Jackie’s Warrior and Life Is Good.

He broke his maiden at today’s distance at Oaklawn in April and then won here over an extra half-furlong in June when he drew off to win by six and a half lengths in comfort. We should see the best of Following Sea today and he gets 6lb from Firenze Fire.

British tourist Good Effort is a solid Group 3 type at home and has shown his best form on synthetics, notably when winning at Deauville last time and when runner-up in a Group 3 at Newcastle three starts ago, which was probably his lifetime best on bare ratings. He is used to a straight course, though, and it remains to be seen how effective he can be on an unfamiliar surface and round a turn.

Jalen Journey got the Grade 3 Frank DeFrancis Memorial at Laurel on a disqualification last time and has never actually crossed the line first in a stakes race. He’s been in good form this year in an allowance optional claimers, winning here and at Saratoga, but needs a lifetime best to even have a shot today at Vosburgh Stakes.

A tight, intriguing set-up for the 2021 Vosburgh Stakes, but at the forecast odds the choice is the two-time Grade 1-placed FOLLOWING SEA now he’s back sprinting.

Wesley Ward may hold the key to the Matron, but which key, and will he even try to turn this lock? He has Chi Town Lady and Poppy Flower in here and in the Grade 3 Futurity against colts on Sunday, so plans may change late.

Of the two, unbeaten Chi Town Lady seems the pick after running down Poppy Flower late to beat her by a length and three-quarters in a stake at Saratoga in August. Poppy Flower, who won her maiden over this course and distance, was then third in a stake at Kentucky Downs when a half-length behind runner-up Mystic Eyes, with Lady Danae a well-beaten fifth.

Prior to that, Lady Danae had won on debut at Saratoga when beating Bubble Rock by two lengths, and Bubble Rock gave a boost to the form when a comfortable winner next time out back at the Spa.

A simpler strand leads to Makin My Move, who showed plenty when thrashing her rivals by upwards of 12 lengths on debut at Saratoga and switches to turf here. That performance entitles her to strong consideration in this field, and if she takes to the weeds she’ll have to go close. Also impressive at the Spa on debut was Mystic Eyes, coasting home by four and a half lengths, and that subsequent effort at Kentucky Downs (see above) puts her almost on a par with Chi Town Lady.

Another getting turf for the first time is Mainstay, beaten in two Graded stakes at Saratoga since winning on debut, most recently when four and a half lengths fourth in the Grade 2 Adirondack. Saratoga debut winner Benbang, who had The Club three and a half lengths back in second that day, was then pitched straight into the Grade 1 Spinaway at the Spa and failed to cope, finishing a well-beaten sixth. She should find this easier and is yet another trying turf for the first time.

Gal In A Rush got her maiden win here on a disqualification and drops back from a mile now, which makes her difficult to be candid about in a race that is difficult to be confident about, given the uncertainty over the participation of one of the main contenders.

If Chi Town Lady runs in the Matron she is likely the one to beat, but with doubt over her participation we’ll side with MAKIN MY MOVE, a hugely impressive debut winner.

Follow us on Social Media for instant 2021 Vosburgh Stakes updates!