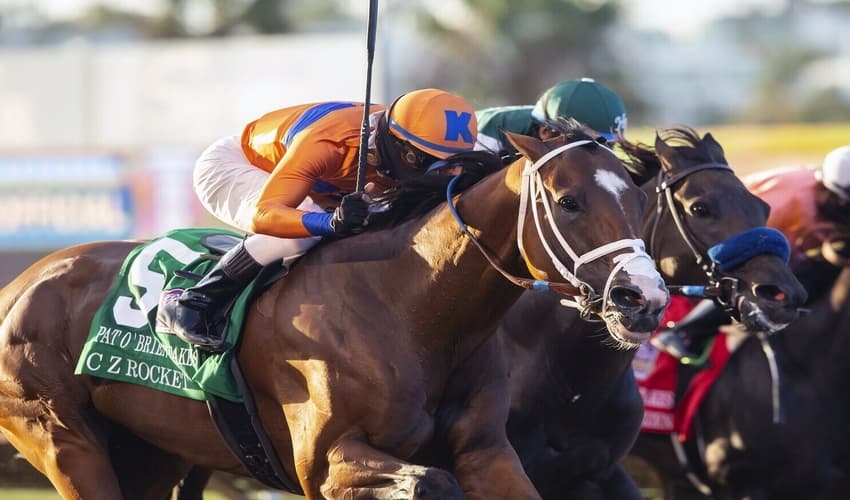 On this past weekend action, we had the Pat O’Brien Stakes from Del Mar and the Sword Dancer Stakes and the Forego Stakes, both from Saratoga Race Course. The rest of this week, we’re focusing on the 2020 Kentucky Derby – today, take a look at a quick recap of the weekend action.

If you can’t help yourself, just down to the bottom for some scoop on special KD betting options.

Six-year-old gelding C Z Rocket breezed to victory on Saturday at the Pat O’Brien Stakes, giving him four consecutive wins. When Tom Kagele purchased him on April 30, he had dropped three straight races – by a total of 37 ¾ lengths. It had been over a year since his last victory.

Ridden by Flavien Prat, C Z Rocket was in third place up the backstretch. The leader, Law Abidin Citizen, had set fairly pedestrian fractions of 23.10, 46.04, and 1:10.06. CZ Rocket pulled even with the leader, along with Flagstaff, and then the three took off to the finish, until C Z Rocket pulled ahead to win by half a length, with a final seven-furlong time of 1:22.25 on a fast track. Flagstaff came in second, followed by Law Abidin Citizen. C Z Rocket’s streak now includes a win in a May 25 claimer at Churchill Downs; a June 21 claimer at the same track; a July 12 optional claimer at Keeneland, and now the Pat O’Brien Stakes.

Channel Maker led from start to finish in this 12-furlong race on the inner turf. A six-year-old gelding, Channel Maker enjoyed the softer surface and now has an automatic entry into the Breeders’ Cup Turf on November 7 at Keeneland Race Course.

This was Channel Maker’s third Sword Dancer Stakes. He was the runner-up in 2018 and came in fourth a year ago. This time around, his jockey, Manny Franco, drove him out to the lead, finishing his first quarter in 25.10. Marzo was in second, just to the inside, and Corelli was in third. Channel Maker held a lead of a length and a half through the first crossing of the finish line. Channel Maker hit the mile in 1:42.33. After that, Corelli made a run along the rail, and Aquaphobia made a late charge as Marzo faded. At the stretch call, Channel Maker led by 5 ½ lengths and added a quarter-length by the finish, with a final recorded time of 2:34.86. Aquaphobia was second, followed by Corelli, Pedro Cara and Marzo.

Win Win Win took advantage of a chance to run at a shorter distance (seven furlongs), and it paid off big-time, as he roared to his first graded stakes victory. Ridden by Javier Castellano, he started out last in a field of 11 horses, 16 ¼ lengths off the lead, and rallied to win – all in the middle of a driving rain. A year ago, Win Win Win had settled for ninth and seventh places at the Kentucky Derby and Preakness Stakes, respectively, so the shorter distance appears to have paid off for him.

Kentucky Oaks Odds are Now Up!

As expected, the Kentucky Oaks will finally take place this friday, and JAZZ Sports has all the betting odds for the participants. We’ve made sure to list the top 3 horses below for your viewing; if you wanna see the full list, look it up under the Horses Section of JazzSports.ag betting board. Keep in mind this race will take off the day before the Classic KD, on Friday, Sept. 4th

Give an edge to your horse-betting with Horse Racing Tote daily content, written by expert racing pundits from all over.