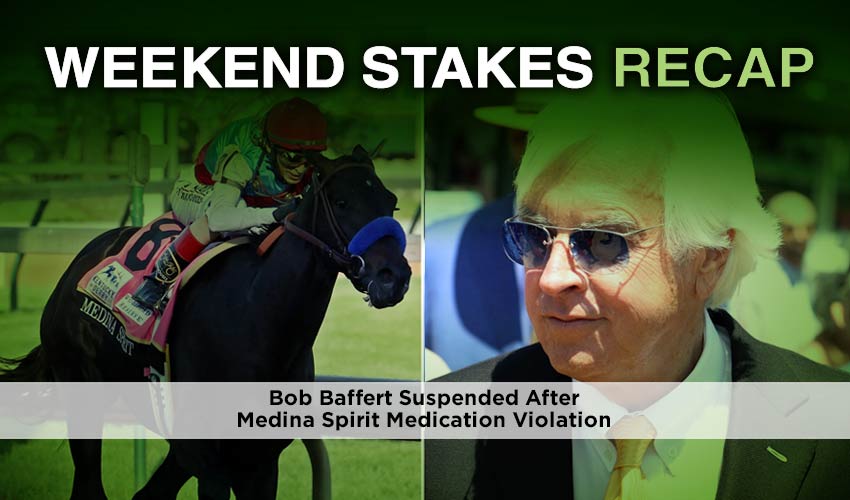 Weekend Horse Action in US horse racing was rocked on Sunday after the shocking revelation that Medina Spirit had tested positive for a banned substance. The news threatened to overshadow some excellent performances this past weekend; and you can get a full rundown on some of the featured races below.

Medina Spirit test positive for Betamethasone which could cost him the Kentucky Derby victory and has caused Trainer Bob Baffert to be suspended by Churchill Downs.  Pimlico officials have said; they will allow Medina Spirit to run in the Preakness but trainer Baffert has decided to leave the horse in the hands of assistant trainer Jimmy Barnes and will return home to California.

Jockey John Velazquez took Channel Cat (8-1 odds, $18.40 win price) to the lead from the start in the $700,000 Man o’ War Stakes (G1T) and then despite setting fast fractions; the son of English Channel battled to the end to win by a nose over fast closing Gufo  to win the 1 3/8-mile turf race at Belmont Park.

Channel Cat cruised along on a clear lead through fractions of 22.69, 47.53, 1:12.45, and 1:37.49 with a final time of 2:13.34 on good turf.  (G1) Belmont Derby Invitational Stakes Gufo finished second with Moon Over Miami third.   Sovereign, winner of the 2019 (G1) Irish Derby, was the 2-1 second choice in his US debut for trainer Chad Brown; but broke slowly and was never in contention while finishing seventh in the field of eight.

Weekend horse action G3 at Peter Pan Stakes for 3 year olds is the final New York prep race for the Belmont Stakes to be a competitive renewal despite a small field of five; but Promise Keeper made all the running to seal a commanding victory for trainer Todd Pletcher.

The three-year-old looked unfazed after going off as the clear favorite in the betting and sat an ideal stalking trip and then swept to the lead to win by two and a quarter lengths from late closing and second place finisher Nova Rags.  The field was relatively spread out at the end; with Overtook finishing a length and a half behind Nova Rags, while I Am The Law was back in fourth, just over eight lengths behind Overtook. Wolfie’s Dynaghost was the final horse to finish.  The fractions were 24.53, 48.64, 1:13.20 and a final time of 1:50.71 over the nine furlongs.   Sent off at 3/2, Promise Keeper returned $5 and was the fourth Peter Pan winner for trainer Todd Pletcher.

Victim of Love utilized a stalk-and-pounce approach under Joel Rosario to successfully defend her title in the 71st renewal of the Grade 3, $150,000 Vagrancy Handicap; a 6 1/2-furlong sprint for older fillies and mares at Belmont Park.

The 5-year-old Speightstown mare was ridden to victory by Joel Rosario after pressing the pace in second in the early stages. She took over in the stretch to complete the 6 1/2 furlongs on the fast main track in 1:17.27.  Sadie Lady held second by a nose over Pacific Gale. Piedi Bianchi and Honor Way rounded out the order of finish. Kiss the Girl and French Empire scratched.  Victom Of Love returned went off at 2/1 and paid $6.30 to win.

Following a three year old campaign that saw her finish third in the Breeders’ Cup Filly and Mare Turf;  Harvey’s Lil Goil made a successful return to the races holding off European import Lemista to take the Grade 3; $150,000 Beaugay for older fillies and mares at Belmont Park by a half-length in her seasonal debut.

Breaking from the rail in the Beaugay, run at 1 1/16 miles on Belmont’s inner turf course; Harvey’s Lil Goil was clearly fresh as she quickly came out of the gate under Junior Alvarado, to sit second as Platinum Paynter took the early lead.

The slow fractions of 26.0, 50.93, and 1:15.28 for three-quarters over the good turf course created a compact field  as they hit the far turn and the pacer quickened.  Harvey’s Lil Goil; put her neck in front and begin to open up but then Lemista started to cut into that margin but had to settle for second.  She returned $4.30 on a $2 win wager as the favorite and completed the distance in 1:43.44

Making his first start since a second-place finish in the (G3) Mr. Prospector Stakes at Gulfstream Park in December; Firenze Fire tracked pacesetter Chateau through the opening five furlongs, then took command inside the eighth pole en route to a 3 1/4-length victory in Saturday’s Grade 3 Runhappy Stakes for 4 year olds and up at Belmont Park.

Ridden by Irad Ortiz Jr; the Kelly Breen-trained 6-year-old traveled six furlongs in 1:09.76 and paid $3.80 as the favorite in the field of five seasoned older runners.  Chateau; the 7-5 second wagering choice who set fractions of :22.59, :45.51 and :57.48 held second by three-quarters of a length; with Town Classic edging Stan the Man in a photo for third. Drafted trailed the field.

Neige Blanche gets first US win in Santa Barbara

French-bred Neige Blanche managed to defeat Rideforthecause by a scant nose after a marathon mile and one half on turf in Saturday’s Grade 3, $100,000 Santa Barbara Stakes at Santa Anita Park.  Ridden by Juan Hernandez and trained by native Frenchman Leonard Powell, Neige Blanche registered her first North American stakes win while stopping the clock in 2:28.01.

Weekend horse action starting on Santa Anita’s hillside turf course; heavily favored Tapwater, with Flavien Prat up, appeared to be in firm control on the lead with longshot Star of Africa just behind her in second, about one length off the lead as they went by the grandstand fopr the first time.  Turning up the backside, Tapwater maintained her lead with Neige Blanche three off the lead heading to the far turn.

Make sure to check Horse Racing Tote for all the latest horse news; weekend horse action, graded stakes, and so much more.