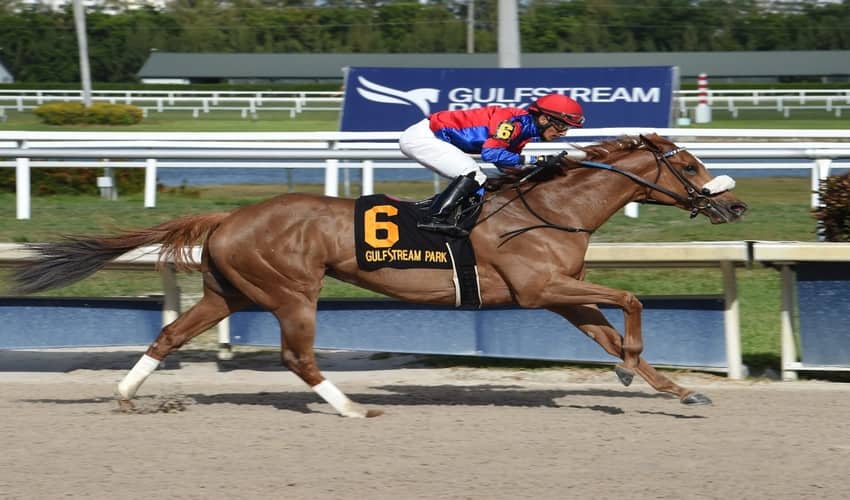 Weekend Horse Racing: We’ve made it past the last major prep stakes tied to the qualification points for September’s Kentucky Derby, with Tiz the Law emerging as the heavy favorite, at least at this point. This weekend, though, horse racing continues, with Saturday’s major races coming from Woodbine and Saratoga Race Course. Take a look at the action, with odds provided by America’s Best Racing.

This race is for three-year-old fillies, running the 1 ¼ mile distance at Saratoga Race Course to prepare at least some of them for the Longines Kentucky Oaks, three weeks from Saturday. This is the first opportunity for all of these horses to race at the full ten furlongs. The winner of the Alabama Stakes would also qualify automatically for the Longines Distaff, set for November at Keeneland.

Swiss Skydiver is the clear favorite after finishing as the runner-up at the Toyota Blue Grass Stakes, in which she was the only filly. She finished behind Art Collector, who will likely turn up as the second choice in September’s Kentucky Derby. She has won three consecutive graded stakes with fillies before the Blue Grass. However, as with the other horses, the X factor is the longer distance.

Bonny South is an interesting dark horse. She’ll have Irad Ortiz Jr as her jockey, which will help her out, and she won the Fair Ground Oaks. She slipped to fourth place in the Ashland Stakes, but she is a finisher, so the longer distance could work to her advantage.

Envoutante came in third at the Ashland Stakes, her first Grade I stakes. She has never won a graded stakes, but this distance should work to her advantage. If Swiss Skydiver gets off to an overly aggressive pace, Envoutante could end up benefiting at the finish line.

March to the Arch came in sixth at the Wise Dan Stakes (Grade II) back on June 20 at Churchill Downs, finishing 2 ¼ lengths back, but based on what the horses who finished ahead of him have done, that finish looks more impressive. He won the race and also won in his next stakes, as did fourth-place finisher Aquaphobia, who won the Grade I United Nations Stakes at Monmouth Park. Parlor finished third and then finished a nose back of the winner in a Grade I stakes in his next race.

Dream Maker is the long shot here; he got off to a disappointing start in the chase for the Triple Crown. This will be his first start on grass; his last race, on July 12, was a fourth-place finish in an allowance optional claimer on July 12. He is related to four winners on grass, including Dream Dancing, who won the 2017 Del Mar Oaks (Grade I).

Silent Poet is the favorite here, who has won both of his starts, although both were at shorter distances than what he will see Saturday. He won the Vice Regent Stakes at a mile in September 2018; his four wins since then have run between 6 ½ and 7 ½ furlongs.

Delaware is the second choice; he won two stakes races in France in 2019, both at a mile distance, including the Shadwell Prix Daphnis (Grade III). He came in second over seven furlongs in an allowance optional claimer at Belmont Park on June 7.

Give an EDGE to you betting with Horse Racing Tote’s expert racing content.