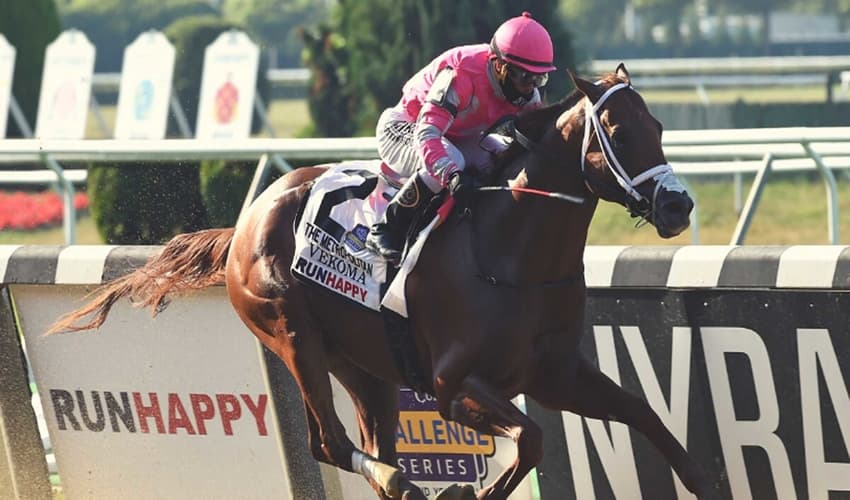 Weekend Racing Review: Three big races at Belmont Park highlighted the nation’s horse racing action this weekend. The Grade II Suburban Stakes, followed by the Grade I Manhattan Stakes and the Grade I Runhappy Met Mile, all were on the slate, and horse racing fans got plenty of terrific action. Take a look at our recap of these three exciting racing events.

*In the meantime, don’t forget to check out JazzSports.ag complete Racebook. They offer racing pools and other betting alternatives for action fanatics.

Tacitus found his way back to the winner’s circle in the Suburban Stakes, the last of a series of graded stakes events at Belmont on Saturday. Tacitus’ last result had been a fourth-place finish at the Grade II Oaklawn Handicap back on May 2, where he started by taking his time on a track that would have rewarded a more aggressive approach. He made his move eventually, but he could not get closer. On Saturday, he was ridden by John Velazquez, a Hall of Fame jockey, and he took advantage of an inside post position and blew by Parsimony, a huge underdog who nonetheless set the early pace with a 24.68-second first quarter-mile.

Parsimony and Mr. Buff held the lead through the half-mile, but after the far turn, Tacitus began to pick up speed, making a three-wide move at the three-quarters mark, hitting it in 1:10.82. Parsimony continued to go all out, but Tacitus simply ran away from him, passing him at the 3/16 pole and winning by 8 3/4 lengths, with a time of 1:59.51. Then came Moretti in second and Parsimony in third, followed by Just Whistle, Mr. Buff and Sir Winston, who won the Belmont Stakes in 2019. This was Tacitus’ first win since the Grade II Wood Memorial in April 2019.

Instilled Regard and Rockemperor finished one-two at the Manhattan Stakes on Saturday. Their trainer was Chad Brown, who has had horses win the Manhattan Stakes six times in the last nine years, dating back to Desert Blanc’s win in 2012. In 2019, his horses took all three spots in the trifecta, with Bricks and Mortar winning.

By the time betting finally settled down, Rockemperor was the slight favorite. He got the edge going into the clubhouse turn, ridden by John Velazquez, sitting just fof the pace while riding on the fence. Instilled Regard moved into the middle of the pack, while Cross Border led through the quarter (24.56), the half (50.46) and the three-quarter (1:15.93).

At that point, Sadler’s Joy started to make a furious move on the outside, and a hole opened up in front of Rockemperor. However, Instilled Regard, ridden by Irad Ortiz Jr, zipped through traffic and moved ahead of Rockemperor at the sixteenth pole and won by a neck in a time of 2:02.59. It will be interesting to see who wins the next time those two horses enter the same race.

Vekoma continued his undefeated four-year-old season as he went wire-to-wire to win the Runhappy Met Mile, winning by 1 1/4 lengths. The eight horses in the field had won a combined 20 graded stakes races. Now Vekoma has qualified for a free entry to the Breeders’ Cup Dirt Mile in November. Ridden by Javier Castellano, Vekoma broke nicely from the second post and zipped to the front, apssing the quarter in 22.73 seconds and the half in 45.87. Coming out of the turn, he held to the inside and then sprinted for the house, holding off a concerted effort from Network Effect, finishing in 1:32.88.