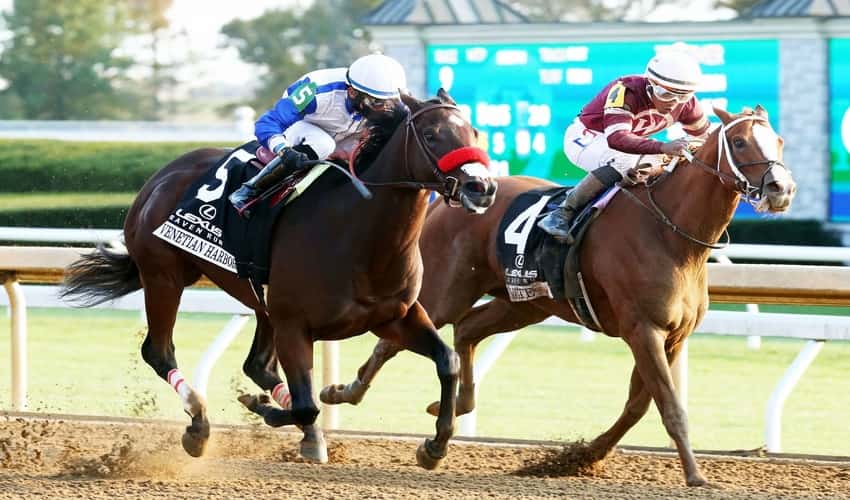 Venetian Harbor Rolls to Victory: The top two races from Saturday were the Lexus Raven Run Stakes, at Keeneland Race Course, and the Autumn Miss Stakes, from Santa Anita Park. Both races served as warm-ups (and last-minute qualifiers) ahead of next month’s Breeders’ Cup races.

Before we continue with our weekend report, let us do a little research of the latest Racing odds for the Breeders’ Cup, with the aid of our friends at classic online racebook JazzSports.ag

Venetian Harbor rolled to a fairly easy victory on Saturday, as the only real speed in this seven-furlong race. As a result, she did not feel much challenge and just settled into a moderate pace, rather than running away from the rest of the pack. As a result, she only edged out Finite by a neck. Her fractions were :23.06 and :46.17, and then she finished in 1:23.03 on a fast track. She entered the race as the favorite and paid $5.20 on a $2 bet to win. This was the best effort that Finite had shown since she won five races in a row, culminating in the Rachel Alexandra (Grade II) on February 15. She beat Grand Clu Classe for third by half a length. After that, in order of finish, came Reagan’s Edge, Tonalist’s Shape, Secondary Market, Four Graces and Secret Keeper.

Next up for Venetian Harbor is a trip to the Breeders’ Cup for the Filly and Mare Sprint on November 7, which will cover the same seven-furlong course at Keeneland. Also in that race, Gamine will run; this will give Venetian Harbor a chance to avenge a second-place finish to Gamine at the Test Stakes (Grade I) in her last start. Venetian Harbor has also been the runner-up to Speech and Swiss Skydiver in graded stakes, with both races running 1 1/16 miles. Her debut was a win at the one-mile Las Virgenes Stakes (Grade II), which she won by 9 ¼ lengths.

Warren’s Showtime delivered Win #1000 for trainer Craig Lewis, storming back from fifth place to win by a neck. Warren’s Showtime was the favorite in a seven-horse field after finishing third at the Del Mar Oaks (Grade I) in her last race. Quiet Secretary jumped out to the early lead, opening up a two-length advantage with fractions of :22.50 and :45.42 in the first half. At the three-quarter pole, Quiet Secretary came in by 1:09.69; Warren’s Showtime was still fifth at that point. Then she was angled wide by rider Flavien Prat to make an open run along the outside, and she found a new gear to finish the mile at 1:33.77 on firm turf.

The rest of the field finished in this order: Going to Vegas, Guitty, Croughavouke, Quiet Secretary and Mind Out. Warren’s Showtime now has a 6-0-5 record in 13 starts, with career winnings of $520,251.

Give an EDGE to your horse-betting with Horse Racing Tote’s expert betting advice.