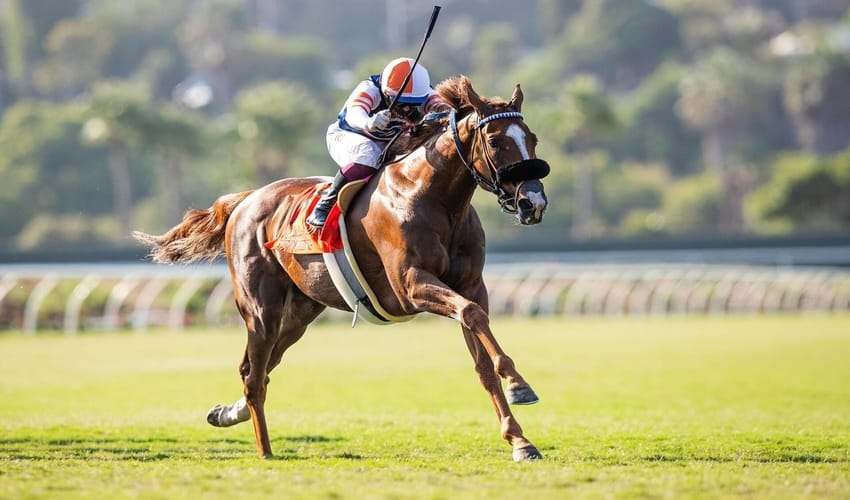 Racing Weekend Report: The biggest action from the horse racing world this past weekend came from Saratoga Race Course and Delmar, as Saratoga hosted the Fourstardave Handicap and Del Mar Fairgrounds hosted the Del Mar Handicap and the TVG Pacific Classic Stakes.

Take a look at how each race shook out as you consider your betting strategy for the upcoming week and when you feel ready feel free to check out all the different betting pools that JazzSports.ag is offering for the upcoming Kentucky Derby.

Maximum Security breezed to another win in a Grade I stakes on Saturday night. The only horse that pushed him hard was Sharp Samurai, a mount that has done well on turf but is new to elite races on a dirt track. However, the buzz around this race has less to do with the winner and more to do with the job that Victor Espinoza did riding Midcourt.

Coming out of the gate, Espinoza did not push Midcourt much. After the slow start, Midcourt ends up on the rail. Espinoza appears to give Midcourt a couple of nudges, but then he doesn’t prod the horse anymore. Maximum Security crosses over and takes position ahead of Midcourt, and from the video, it looks like Espinoza is almost holding Midcourt. Eventually, Midcourt settles into the pocket position, just off the front trio (Maximum Power, Sharp Samurai and Higher Power). Espinoza made this decision even though Midcourt has done best when he is the pacesetter.

Maximum Security ran his first quarter in 23.93 and the half-mile in 47.98, an easy pace for a horse of his quality. He finished six furlongs at 1:12.37 and pulled away from Sharp Samurai down the stretch, winning by three lengths, remaining the best older horse on dirt.

Red King rolled to victory on Saturday, making trainer Phil D’Amato’s resume even more impressive. He now has 14 winners in 60 starts at Del Mar since the horse racing season resumed, with just Peter Miller (15) ahead of him. The heavy favorite was United, and Red King paid $10.60 for a $2 win bet.

Red King picked up his seventh win in 28 starts (all turf races), finishing the 1 3/8 miles in 2:15.75. He made his move near the final turn and was able to keep United at bay, winning by a head.

Halladay was the big winner on Saturday at the Fourstardave Handicap. He pushed into an early lead and settled in, posting a 47.19 half-mile and finishing six furlongs in 1:10.15. Got Stormy, the 2019 Fourstardave winner, mounted a challenge, but Halladay held her off and then won by 1 ¼ lengths. Casa Creed was third, 1 ¼ lengths behind Got Stormy and 1 ¼ lengths ahead of Emmaus.

You can also give an edge to your horse-betting by reading Horse Racing Tote’s regular content, provided by experts in the field.