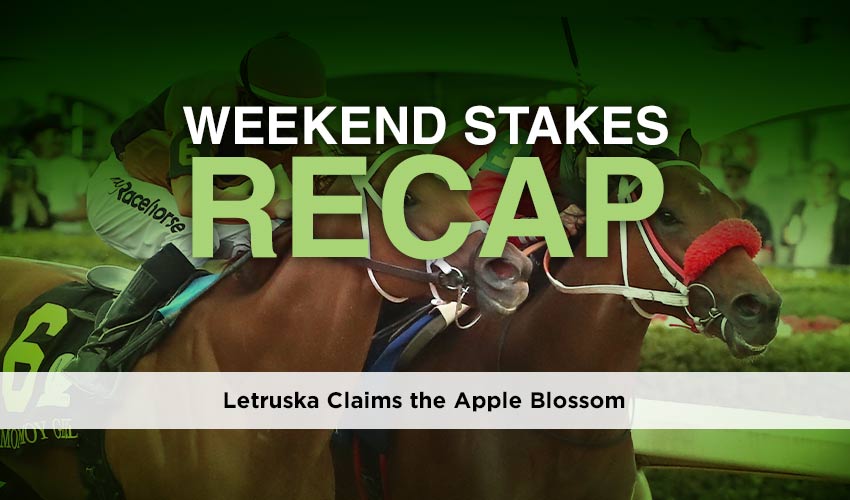 Weekend Results: It was an action-packed weekend of racing across the nation this past weekend, with Grade 1 action at Oaklawn Park and Grade 2 action at Santa Anita. You can catch up with all the results from an entertaining weekend of action below.

There was Grade 1 success for Letruska this past weekend; as she claimed the Apple Blossom Handicap on the line from Monomoy Girl. The Fausto Gutierrez-trained horse made virtually all the running in the contest and needed to find a second wind; in the closing stages to claim a first Grade 1 success.

Monomoy Girl had got her nose ahead with a furlong left to travel; but she was beaten by a head at the post. Swiss Skydiver was six and a half lengths behind the leader; as the Kenneth McPeek-trained horse finished back in third after being outpaced down the final stretch. The 5-year-old Letruska was timed in 1:43.14 for the 1 1/16 miles and paid $8.80 to win while adding $600,000 to her earnings and pushing her career total to $1,157,319.

Well regarded as a 3-year old, Silver State  fell off the Triple Crown trail last March after finishing 7th in the Louisiana Derby (G2).  But since resuming his campaign last fall; he has been perfect, and added the $1 million Oaklawn Handicap (G2)  when he won by half-length over Fearless . The race was his fifth consecutive victory and his first graded stakes win.

Turning for home; Ricardo Santana was part of a six horse pack and was five wide when the colt begin to wear down the opposition and go to the lead.  Silver State completed the 1 1/8 miles in 1:49.56 on a fast track, carrying 118 pounds, four fewer pounds than favorite Express Train Fearless; who came under pressure after stalking the leaders, fell back to sixth in midstretch but fought to grab second; a length in front of favored Express Train in third. Owendale  rallied outside to be fourth.

Carrying five more pounds than his rivals proved no problem for Agave Racing Stable and Sam-Son Farm’s Say the Word  April 17 at Keeneland. Under leading rider Luis Saez, the 6-year-old More Than Ready  gelding rallied from mid-pack and shook free by 1 1/2 lengths to win the $200,000 Elkhorn Stakes (G2T)

Say the Word was sent off as the 5-2 second choice in the eight-horse Elkhorn.  Channel Cat held for second by a neck over third-placed Crafty Daddy . Fantasioso  rallied from last for fourth, followed by North Dakota , Red Knight , Tide of the Sea- course record holder, and  Epic Bromance.  Cross Border and Monarchs Glen were scratched.

It was a pulsating battle in the Grade 2 Californian Stakes this past weekend; as Brazilian-bred Royal Ship was able to claim his first Graded success in the United States. He completed the course in a time of 1:48.47, and connections have firmly set their sights on the Hollywood Gold Cup at the end of May for the talented four-year-old.

Country Grammer for trainer Bob Baffert had been among the favorites to win the race, but he looked to have faded very quickly when put under pressure by the eventual winner. The favorite for the race beforehand was Independence Hall; but the Michael McCarthy-trained horse finished nine and a half lengths behind Royal Ship.

There was also Graded action later on in the day at Santa Anita; as the Grade 3 Tokyo City Cup Stakes took place. This was a win for the favorites on the day, as Tizamagician finished a commanding nine lengths clear of Zestful for trainer Richard Mandella.

The win for the four-year-old was his first success of the season and was an excellent return to action after finishing four lengths behind Idol in the Grade 1 Santa Anita Handicap last month. Lure Him In finished back in third for trainer Robert B Hess, while Ronamo finished last of the four that completed the race. Multiplier for trainer Andrew Lerner was pulled up.

3.65 million dollar purchase Cezanne, wins the $98,000 Kona Gold Stakes (G3) at 6 1/2 furlongs by 9 3/4 lengths.  The Kona Gold was the first start for Cezanne since finishing last of four in the Shared Belief Stakes last August at Del Mar.  Favored Brickyard Ride showed the way through fractions of:21.18 and:43.60 but Cezanne ($5.80) took over turning for home and powered away to win in a final time of 1:14.71.  Brickyard Ride was second, followed by Fight On and Ax Man.

There was also Grade 1 action in Japan this past weekend, as the Satsuki Sho took place. The Japanese 2,000 Guineas was open to the best three-year-olds in training; and was won by Efforia for trainer Yuichi Shikato. He claimed the success by a dominant three lengths from Titleholder.

The favorite for the race was Danon The Kid, but the Takayuki Yasuda trained horse could only finish in 15th out of 16 runners. The win for Efforia ensured that the three-year-old was able to maintain his unbeaten start on the track; and he became just the 19th unbeaten colt to win the race in 81 renewals.