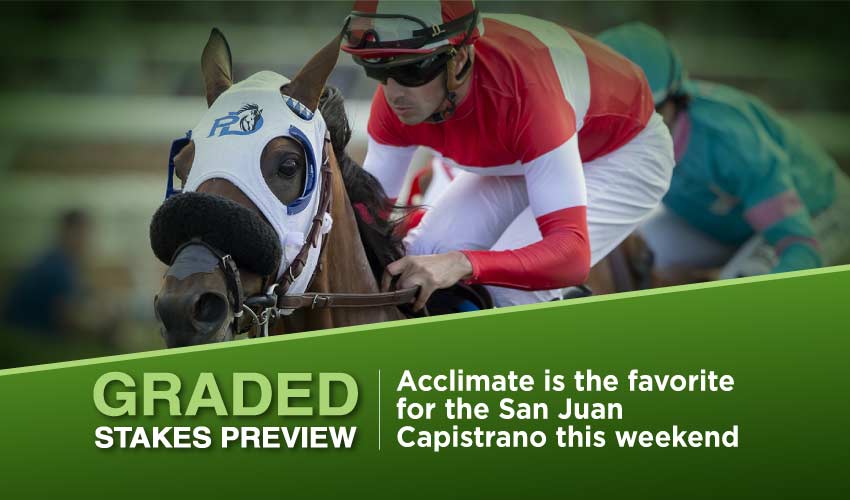 There will be an excellent selection of weekend US races, with Grade 3s being staged at Santa Anita Park and Monmouth Park.

The Grade 3 action at Santa Anita on Saturday comes in the form of the San Juan Capistrano Stakes, which will be run over 1 ¾ miles. Horses aged three and older can enter this race at Santa Anita.

Acclimate will be a popular selection for the San Juan Capistrano this weekend, as the Philip D’Amato-trained horse comes into the race after finished second in the G2 Charles Whittingham Stakes. That was his fifth run of the season, and he has placed on four of these starts.

Stablemate Red King will be looking to reverse the form from the Charles Whittingham, as he finished back in third. However, he has a proven record in this race as he won the San Juan Capistrano last year. Ward ‘n Jerry also competed 12 months ago, but his fourth in the Unusual Heat Turf Classic doesn’t heighten his chances of improving on the third-place finish he achieved 12 months ago.

Lure Him In is a progressive one of the contenders, as he finished third in the G3 Tokyo Cup on his first run at graded company last time out.

There is also Grade 3 action at Belmont Park this weekend. Four-year-olds and older will contest the Poker Stakes. Contenders will race over the one-mile distance on turf.

Raging Bull looks like a very strong chance for trainer Chad Brown in this contest. The six-year-old was the winner of the G1 Maker’s Mark Mile on his last start, which was his second win in Grade 1 company in 12 months.

Get Smokin and Flavius both come into this after running in the Seek Again Stakes, which was won by Get Smoking. However, both will have to run career-best races to seriously challenge Raging Bull.

Oleksandra is the mare in the field for trainer Neil Drysdale. She was fifth in the Unbridled Sidney on her last start. However, her win in the G1 Jaipur Invitational is serious form if she can replicate that.

Monmouth Park hosts the G3 Eatontown Stakes, which will see fillies and mares aged three and older. Horses will race on turf over 1 1/16 miles.

This could be one of the most interesting races of the day. Nay Lady Nay will be lining up for the second time in 2021, as she looks to build on the G3 Beaugay fourth-place finish she achieved on her season opener. Counterparty Risk won the G3 Endeavour earlier in the season but was fourth in the Plenty of Grace most recently.

Tasting The Stars won for the fourth time in six races in the Brookmeade at the end of last season, and it will be interesting to see the condition she returns in. Micheline was outside the places in the G1 Jenny Wiley. Meanwhile, Vigilantes Way will be hard to ignore after finishing as the runner-up in the G3 Gallorette.

Santa Anita hosts Sunday Grade 3 action, as the American Stakes takes place over one mile on the turf. Connections can enter horses in this race should they be aged three and over.

There is a selection of horses coming into this race with graded form behind them. Majestic Eagle was second in the G3 Daytona Stakes, while Border Town was fifth in the G3 San Francisco Mile. Tatters To Riches also will be hoping for further improvement after finishing eighth in the G2 San Antonio Stakes.

Neptune’s Storm for trainer Richard Baltas was fourth in the Tourist Mile on his last start but shouldn’t be ignored after winning the San Francisco Mile in 2020. Meanwhile, Restrainedvengence has placed in his last two graded starts in the G1 Shoemaker Mile and San Francisco Mile this season.

Follow us on Social Media for instant Weekend US Races updates!