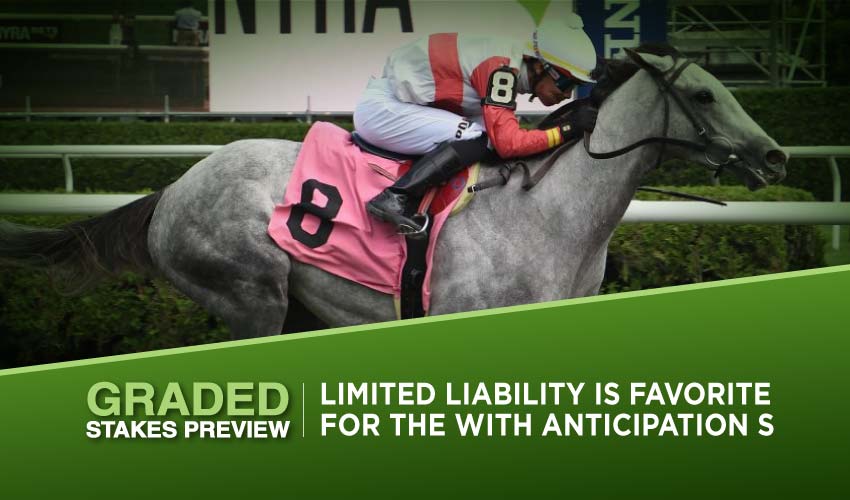 With four of the seven runners having won their only start, the With Anticipation Stakes at Saratoga is more about nuance, feel and subjectivity than anything more concrete. Track experience is always a positive, but that doesn’t narrow things down very much, with only the longshot Ready To March (30-1) making his first visit to the Spa. Although his debut victory at Finger Lakes over five furlongs showed promise, he takes a mighty step up both in distance and environment and there’s no need for bettors to take an equally large leap of faith.

Limited Liability (7-5) is the morning-line choice after winning on the weeds in a $100,000 maiden over course and distance a month ago, when he cleared away in the last sixteenth for a dominant and impressive success. The Kitten’s Joy colt has all the right connections in his corner – trainer Shug McGaughey, owner Stuart Janney – and it’s easy to see why the oddsmakers prefer him to, say, Silipo (15-1), who won his debut equally impressively here, but in a maiden claimer over five and a half furlongs on dirt, which gives him an entirely different set of conditions to deal with now.

Kavod and Coinage have more experience, will be tougher cookies. Coinage (6-1) won a maiden at the second attempt, blitzing his rivals by more than seven lengths at Belmont, but didn’t look totally ready for the step up to black-type here in July when third behind Run Curtis Run. Kavod (15-1) also won a Belmont maiden, but on his first start in graded stakes was beaten a long, long way behind Wit in the Grade 3 Sanford at the Spa.

Wit is a potential top-notcher, but even so Kavod needs to improve considerably for this extra distance if he is to be in there pitching at the business end of this race.

The strangely named Gooch Go Bragh (4-1) gives us a different set of clues. Like Limited Liability, he made his debut in a $100,000 maiden over course and distance, but came off second best to Dripping Gold, beaten two and a quarter lengths. Dripping Gold is from the McGaughey barn, so you’d think Shug knows where he stands on the relative merits of his two maiden winners, and how Gooch Go Bragh might match up to Limited Liability. Have we saved the best until last? Portfolio Company – another son of Kitten’s Joy – also won a $100,000 maiden on turf over course and distance, and has similarly impeccable connections in trainer Chad Brown and owner Klaravich Stables.

There is a line through Boston Flagship that gives Gooch Go Bragh a slight form advantage over Portfolio Company (9-5), but it doesn’t do to be too dogmatic about such flimsy evidence at this stage of juvenile development. Chad Brown is the leading trainer at the Spa this summer, and the overall strength of his barn holds greater sway in a close-knit affair full of questions rather than answers, full of colts with potential to shine. Prediction Portfolio Company

Follow us on Social Media for instant With Anticipation Stakes updates!