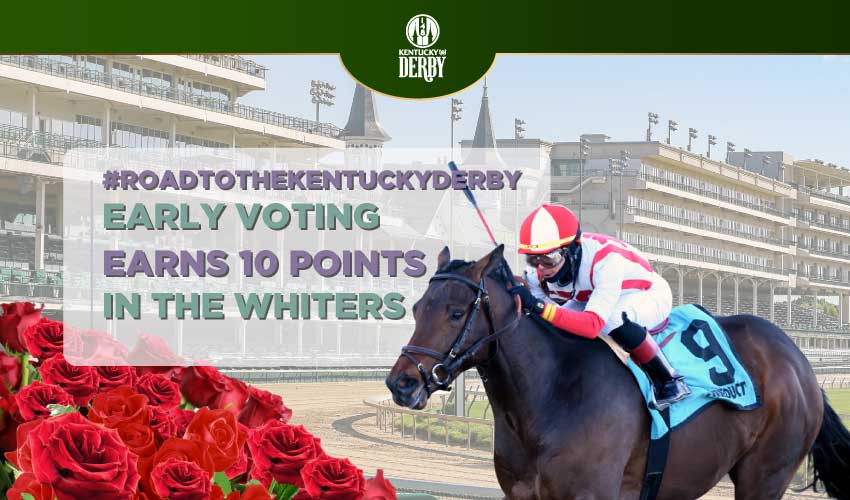 The New York challenge for the Kentucky Derby was reinforced at Aqueduct on Saturday when Early Voting shrugged off his inexperience to post an utterly dominant gate-to-wire victory in the Grade 3 Withers S, the highlight of the afternoon.

It was an 11-horse race that ended up as a one-horse race, as Early Voting nailed his Kentucky Derby credentials to the mast with a barnstorming performance in the Withers S, the feature event at Aqueduct on Saturday.

What had looked a competitive contest as the runners entered the gate quickly became a solitary stroll for the son of Gun Runner, one of the most inexperienced colts in the field, who collected ten ‘Road’ points and a whole lot of plaudits for his dominant display. Early Voting was fast away, soon on the lead, and from there on in the 6-5 favourite just kept improving his position under Jose Ortiz.

He was six lengths clear at the top of the lane and from that point loneliness was his only problem, his greenness showing as he wandered a little through the stretch. It didn’t matter; Early Voting was four and a half lengths clear at the wire, stopping the clock in 1:55 and four-fifths, while the one-eyed longshot Un Ojo rallied late for second by a head from Gilded Age, who plugged on at one pace. The five horses who came on from the Jerome Stakes here on New Year’s Day could manage no better than Smarten Up’s sixth place.

“With a horse like this, you have to think about the Derby. He’s bred for two turns and has tremendous stamina,” said trainer Chad Brown, adding another Churchill Downs contender to his arsenal alongside Zandon and Jack Christopher.

“I think he’s the kind of horse who can endure the tough races ahead. He’s still inexperienced, and might have been looking for company in the stretch. He’ll get better with more seasoning.”

Early Voting is now unbeaten in two starts, both at Aqueduct, and he is expected to stay at the Big A with the $750,000 Grade 2 Wood Memorial on April 9 – at this mile-eighth distance – projected for his next appearance.

Drafted back in the groove

He hadn’t won a race for almost three years, so a week’s delay was nothing for Drafted, who finally found his way back to the winner’s circle after the Toboggan, rearranged when bad weather shut down Aqueduct seven days ago.

The eight-year-old, a 6-1 chance, had lost 12 straight since winning a Group 3 at Meydan in March 2019 but had far too much for his four rivals here, making a big, swooping move on the turn to swamp front-running 1-5 favourite Happy Medium and clearing away under Jose Ortiz to win by four and a half lengths in a time of 1:25 and change. Runner-up Repo Rocks was six lengths clear of the hugely disappointing Happy Medium.

The Toboggan was a triumph for trainer David Duggan, who was posting his first Graded score since June 2009. “It’s been a long time between drinks,” he said, possibly eyeing some celebratory champagne.

Follow us on Social Media for instant Withers S updates!