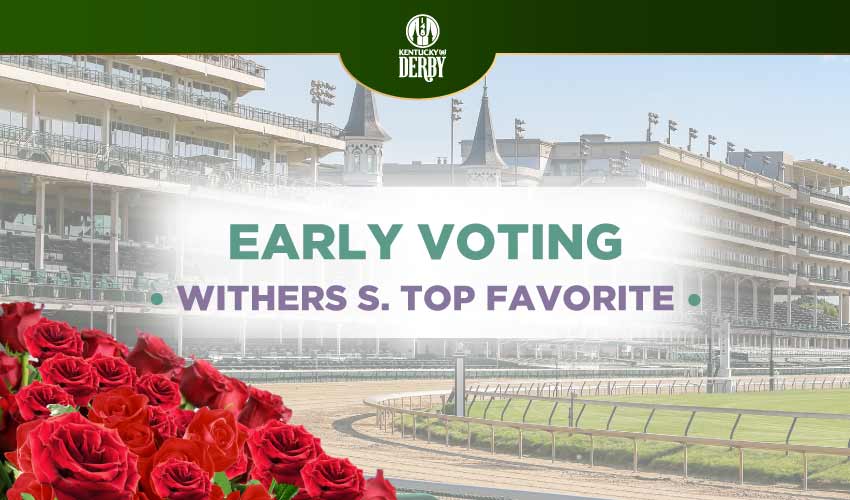 The venerable Withers, first run in 1874 and won by all-timers such as Man o’War, Count Fleet, Native Dancer and Dr Fager, is the highlight of Saturday’s action at Aqueduct, another step on the ‘Road’ to Churchill Downs in May and the scene of a rematch between the first four home in last month’s Jerome, won by Courvoisier.

Ten ‘Road to the Kentucky Derby’ points await the winner of the Withers, the feature event at chilly Aqueduct on Saturday, and the field can be broadly divided into two halves, with a raft of stakes horses taking on maiden winners moving up.

Those stakes horses come from one source, the Withers essentially a re-run of the Jerome over the Aqueduct mile on New Year’s Day, with five of the first six home in that stakes contest meeting up again. It was a sloppy track that day, which suited some more than others, and the extra furlong today will be another decisive factor.

In the Jerome, it was Courvoisier who came out of the fog in front, keeping on strongly through the stretch to win by a length and a quarter from late-closing longshot Smarten Up, who in turn had three-quarters of a length in hand over the favourite Cooke Creek, who was prominent throughout but couldn’t locate a higher gear when it counted. Off the board were Unbridled Bomber, another three-quarters of a length back in fourth and never a threat, and Mr Jefferson, eight lengths adrift in sixth place.

The two to take from the race are likely Courvoisier, whose two wins have come here at the Big A and who is expected to be suited by going longer, and Cooke Creek, who was not happy on the wet surface, is now 5lb better off with Courvoisier, and did well enough when runner-up in the Grade 3 Nashua at Belmont Park on his previous start, although today’s outside post may be a hindrance. The form may not be particularly strong, though, and there are promising maiden winners in opposition.

Notable among them is Early Voting, who got it right first time here over a mile in December when pressing the pace before taking over on the turn, then keeping on well to win by a length and a half. That experience and today’s extra distance will bring out more from him, and trainer Chad Brown had the Withers winner Risk Taking 12 months ago.

Course and distance winner Constitutionlawyer led at every call to break his maiden at the third attempt, drawing off over the muddy track to score by three and a half lengths, and is an obvious candidate to improve. That goes too for Gilded Age, winner of a Churchill Downs maiden over a mile-sixteenth when pulling away in the closing stages, getting home by two and three-quarter lengths.

Turfway Park maiden winner Grantham was an odds-on shot that day and could find this a tough spot, while Un Ojo was a longshot runner-up in a state-bred stakes over seven furlongs here and is moving into the big league now.

Betting Prediction for Cooke Creek may emerge as the best of those from the Jerome, but EARLY VOTING showed plenty of promise when winning on debut here and can take the Withers.

Follow us on Social Media for instant Withers updates!