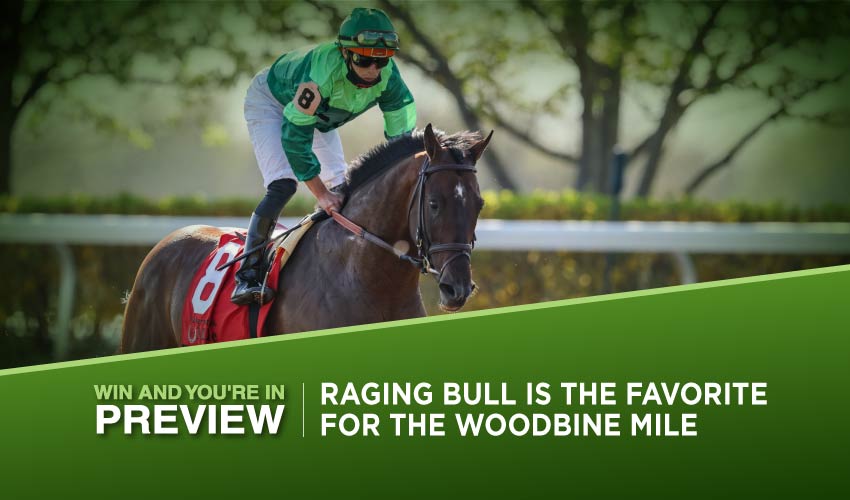 This Saturday is time for some of the most prestigious races at the Woodbine Track in Toronto, Canada. Not only the fillies and mares are about to clash in the Canadian Stakes, but also the always anticipated Woodbine Mile offers Raging Bull to get back to winning ways. The Canadian International Stakes then attracted European warrior Desert Encounter, attempting the third victory in the race.

The first of the most intriguing races throughout Saturday’s card at Woodbine is a race open to three-year-old and up fillies and mares, meeting at the distance of a mile and a furlong. On turf, the field of this G2 with a purse of $250,000 is relatively small; however, it’s hugely competitive as more or less every single participant wouldn’t be a surprising winner.

Mark Casse trained Our Secret Agent (9-2) is quite experienced; moreover, she would deserve a win according to her past performances. Although the four-year-old filly has climbed from Listed races to G2 company, she has scored only in an Allowance race so far, but in this field of five contestants, she could finally be the first to cross the wire. On the one hand, she hasn’t been worse than third in her last four Grade starts; on the other one, Our Secret Agent operated solely on shorter distances. It wouldn’t be any wonder if she handles the trip longer than a mile, but it’s a fact worth mentioning.

When having a better trip, La Dragontea (9-5) should show whether she’s a Grade material as her only outing in this company resulted in an underwhelming fourth place. She ran wide, though, so if the Christophe Clement bound filly saves some energy for the final stretch, she should be in the mix. Both Merveilleux (8-5) and Court Return (7-2) have some experience with Grade races and even boast more class than Our Secret Agent. Barkin (12-1) is the last to mention as she’s had only four starts as a three-year-old, while she added another one this year. Even though she’s unexposed among such company, she doesn’t look like anything special, but she might show us otherwise on Saturday.

We really like our Secret Agent, but La Dragontea seems like she hasn’t shown everything she has to offer. This smart filly could run all her rivals down.

The second turf race we’ll talk about boasts the purse of $600,000 and is meant for three-year-old and older horses.

This G1 event over the mile and a half attracted an exciting field of eight stayers, including two European hopes, primarily Desert Encounter (3-1) trained by David Simcock. The tough gelding was victorious in two past renewals of the race, winning the Canadian International in 2018 and 2019. The race was suspended last year; however, the nine-year-old warrior is back and ready to achieve a record-breaking third triumph here, but it will be anything but easy.

The bay has displayed everlasting vigor regarding racing, finishing fifth in the G1 Prince of Wales’s Stakes among much younger rivals. He also placed second in three of his 2021 outings like last time out, only Teona, who later went on to win a G1 race by beating Snowfall, left him behind. Walton Street (8-5), trained by Charlie Appleby, is the second European raider, having won a G2 race in Dubai and placing third in the G1 race in Germany. There’s some undeniable class about him, rendering him to be a respectable win candidate.

It isn’t easy to pick one from the rest of the field as every single participant has shown something promising to this date, yet we’ll stick with Corelli (4-1), who was quite impressive in the G3 Singspiel Stakes in August. Sitting in the mid-pack, he then displayed a fine turn of foot in the final stretch, outrunning all of his rivals by almost 2 lengths. Sure, it was only a G3 race, but the big white-faced bay seems to handle the even more challenging competition. Still, Corelli has left three of his Saturday’s rivals behind in the mentioned race as English Conqueror (15-1) was second, Belichick (6-1) took third after leading the pack throughout the race, and Primo Touch (20-1) was fourth. Fantasioso (8-1), taking second place in the G1 Belmont Gold Cup Stakes, could be another one to consider.

Although we were smitten by Corelli’s last performance, the European duo makes a strong case here, primarily Walton Street.

Ten participants will line up for this turf G1 race with the purse of $1,000,000, where the older horses could clash with the three-year-olds; however, none of the latter shows up here.

Therefore, the Woodbine Mile will be a matter of five- and six-year-old contestants as Raging Bull (2-1) is about to make amends for his last unlucky performance. The Chad Brown-trained horse is multiple G1 winners, and he added another prestigious success this year in Maker’s Mark Mile Stakes. However, his last two outings resulted in second place in a G3 race and sixth place in the Fourstardave Handicap. He had to carry more weight than his rivals; moreover, the G1 Handicap participants didn’t allow him to finish properly, blocking his way in the final stretch. This time, he’s once more a hugely respected contestant.

There are other exciting horses that caught out eyes, for example, the still progressive Set Piece (5-2) trained by Brad Cox. The handsome Dansili son started his career in Europe, but once he relocated to the US, he reached some victories in the Allowance races, and then the gelding bagged two black-type wins in the 2021 season. Moreover, he was imposing in the G2 Wise Dan Stakes, where he showed a fascinating turn of foot, finishing from the rear of the field to grab the win, while he applied similar tactics in the mentioned Handicap. On this occasion, he reached second place behind legendary Got Stormy.

Besides these two participants, also Olympic Runner (10-1) could play a significant role, winning G2 King Edward Stakes last time out; however, when carrying the same weight, Avie’s Flatter (15-1) might be even better in this renewal. And because the field is quite competitive, the King Edward Stakes second Town Cruise (20-1) and third March To The Arch (8-1) are also in the mix with Ride A Comet (5-1).

Raging Bull and Set Piece should be the leading players, while we slightly prefer the latter to score his first G1 victory because he seems more likely not to be discouraged by navigating through the barrier of numerous rivals. In terms of the King Edward Stakes top finishers, basically, anyone can get a fine place here.

Follow us on Social Media for instant Woodbine Mile updates!